Recent events in which five people were shot by three white men near the "Black Lives Matter" encampment in north Minneapolis are part of the racist backlash that followed the election of Barack Obama in 2008.

On April 7, 2009, soon after the election of the first African-American as president of the United States of America, the Office of intelligence and Analysis of Homeland Security assessed that right wing extremists in the form of white supremacists and anti-government militias would be on the rise. The reason? "Current Economic and Political Climate." In plain English, having a Black president and the recession would lead to the radicalization of white supremacists and the rise of anti-immigrant sentiment. Simply put HS warned about a racist backlash.

Right wing talking heads and media immediately attacked the report. Never mind that this agency, which is predominantly white in its ethnic composition, has at its mission providing fair, accurate, unbiased, intelligence assessments. But right wing media, politicians, and some veterans' groups demanded a retraction. They demanded the retraction of an intelligence assessment! And they got it!

As the past six years have shown, the report was accurate. As reported by several outlets, by 2013 anti-government militias, white supremacists and hate groups reached record highs. To complicate matters, since as early as 2006 the FBI has been warning about white supremacists infiltrating law enforcement agencies. It is not surprising that the past years were marked by a series of questionable (to say the least) police shootings of unarmed Black men.

This is well known but it should be repeated: Affirming that Black Lives Matter in no way, shape or form implies that Non-Black Lives don't matter.

And here we are in 2015. Donald Trump, a presidential candidate, calls Mexicans rapists and murderers and become a front runner. He engages in xenophobic discourse and gets invited to host Saturday Night Life. SNL's decision was another step into normalizing racism against Latinos- and now African Americans. Most recently, Trump suggested his followers for may have reacted appropriately when they beat a Black man wearing a Black Lives Matter shirt who disrupted Trump's speech during a political rally in Birmingham, Alabama.

Since the election of Barack Obama, white supremacists have been on the rise with the help of media, news outlets, the Tea Party and the GOP. All of them are responsible for the normalization of xenophobia. All of them are responsible for the shooting of five people Monday night near the Black Lives Matter encampment at the Fourth Precinct police station in north Minneapolis.

Yes, they are responsible! We have to hold them responsible- law enforcement agencies, media, talking heads and political figures- they need to be held accountable. They have been supporting and excusing white supremacists, others have been inciting violence with their racist anti-Black, anti-Latino, anti-Muslim; and anti-immigrant discourse.

This country is going through a transformational phase. Radical elements within a shrinking majority want to stop this country from being more inclusive. These radicals reject equality because they are afraid of having to compete following the same rules as everybody else, they fear a leveled field.

But make no mistake; those who oppose racism and discrimination, those who fight for equality are the majority, and that includes a majority of whites, too. We are at a historical juncture. Now more than ever we need to stand together in broad coalitions. We need to reject violence while demanding justice and equality for all. That is the only way to move this country forward.
Today, and always, Black Lives Matter. 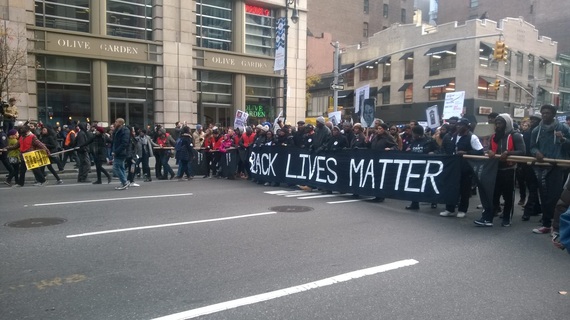