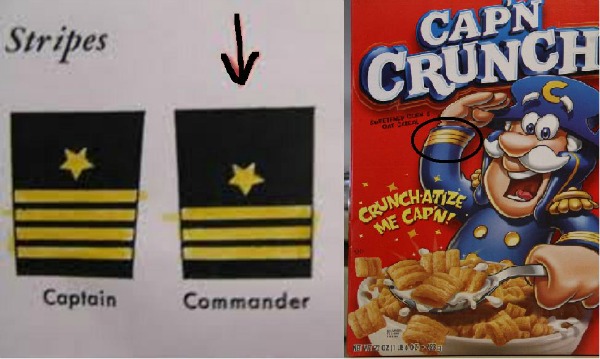 My whole life has just been shattered into a pile of stale cereal crumbs.

Seriously, guys. Your design team had one job. You couldn't have at least gotten the old man's uniform right? Now, adults and children alike are lamenting the fact that the cheery Santa Claus in a blue Napoleon hat is really just a big, fat LIAR. Yes, my fellow Foodbeasts, the "Cap'n" is really just a "Commander" in disguise.

If you haven't already, peep the photo above, and note the disparity between the stripes of a captain and those of a commander. Now check out the stripes on Cap'n Crunch's wrists. One. Two. Three ... Ugh.

Next you're going to tell me that Tony the Tiger is really a cranky bald man in a cat suit, or something equally horrifying.

My only solace is that he goes by "Cap'n" Crunch instead of "Captain." Still, I'm a little heartbroken over here.

It's most likely that the Cap'n only has three stripes because he's a French "Capitaine de frégate" and they technically only have three yellow stripes. Although, that still translates to "Commander" in English . . . and doesn't explain why he doesn't speak a lick of le français.

More:
healthyWisdomcerealtoday i learnedTaste
Newsletter Sign Up
An essential daily guide to achieving the good life
Subscribe to our lifestyle email.
Successfully Subscribed!
Realness delivered to your inbox