"The owner says the massive 'A Whale' will be joined by sister ship 'B Whale' in mid-July -- IF the foreign vessels are permitted to go to work cleaning up oil."

Today, July 1st, is a big day for the giant ship that promises major results to reduce the oil spill from BP's Deepwater Horizon.

The A Whale hopes to demonstrate that cleaning up the Gulf of Mexico may depend not on government, nor on the corporate giant BP, but on innovation and commitment to free enterprise. If so, it would be because Mr. Nobu Su of Taiwan, CEO of TMT Corporation, was undeterred when he got a cold shoulder from those in charge of the cleanup.

Thursday morning (today) he is to meet with Coast Guard officials in New Orleans to outline this weekend's trial run of the A Whale, the huge tanker/oil skimmer which Su has brought to America. He says the ship is the long-needed "big answer to a big problem."

Although he was dismissed when he originally shared his concept with BP and U.S. officials after the Deepwater Horizon explosion, Su forged ahead and spent millions to add intake valves on the bow of the 1,115-foot, 10-story tall ship. These allow it to gather 500,000 barrels daily of spilled oil and water -- 250 times the capacity of the other ships now engaged in the cleanup.

In a face-to-face meeting in Washington, DC, Su told me he still does not know how many millions he spent to sail the ship from near Shanghai to a Portugal shipyard, there to have its unique oil-skimming system installed, and then dispatch the ship to the U.S. He says he made the decision to act about May 1st and the ship arrived in the U.S. by June 25 -- a timetable that U.S. officials had considered impossible to achieve.

Su believes so firmly in its potential that he already has retrofitting underway in Portugal on the B Whale, a sister ship that he says could arrive in the Gulf of Mexico by mid-July. And the C Whale not too long afterwards. 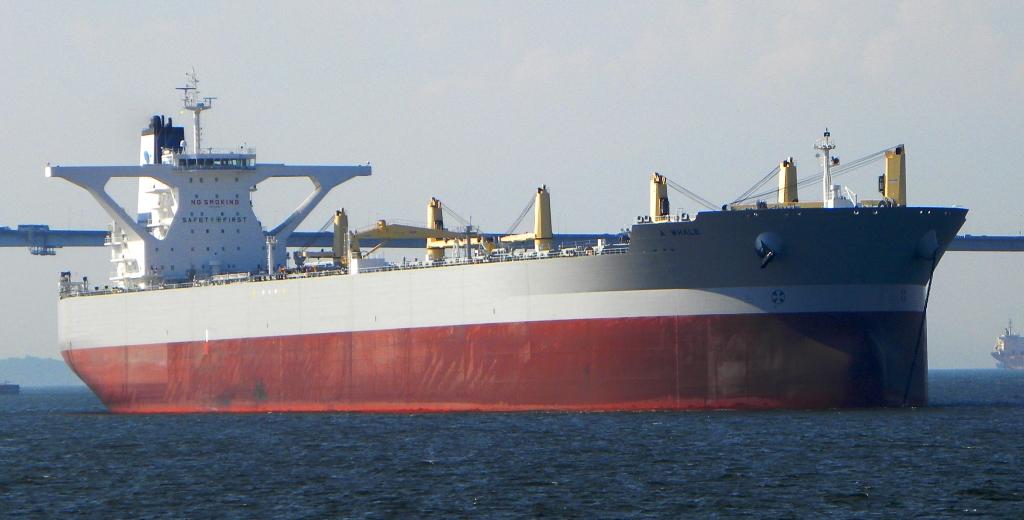 The Not-Invited 'A Whale' Has Crashed the Cleanup Party. (Click to See More Images)

Despite the original rebuffs from BP and federal bureaucrats, Su charged ahead. Rather than waiting to be invited to help in the Gulf, he wrangled an invitation from Virginia Gov. Robert McDonnell to make port in Norfolk for a media event. Once it was on the scene, it became impossible for the Coast Guard and other federal officials, plus BP, to overlook the Whale. And McDonnell's avid support was a big help.

In essence, the A Whale had crashed the cleanup party, rather than waiting for an invitation.

Su's team now has appreciative words for the Coast Guard's willingness to give the ship a chance. Greater concerns are whether others in the oil spill bureaucracy will create barriers, especially over the issue of discharged water. Because most (85-90%) of what is collected is water, the A Whale and other international oil skimmers separate out the oil and discharge the water. It's unclear whether the EPA would try to impose its strict standards that discharged water can only have 15 ppm of pollutants -- a requirement of 99.9985% purity that is impossible to meet on this scale and under these conditions.

So far, the Obama Administration has not issued environmental or Jones Act waivers that would remove any doubts about whether the A Whale can go to work, if its test runs prove successful. Then Su's TMT company could negotiate with BP for its services.

Could bad weather get in the way? Su says the mammoth vessel can withstand what others cannot, so it would be the last ship that had to leave due to weather--and the first to return to oil removal work. Because his company also operates oil drilling platforms in Asia, Su is familiar with the challenges of weather.

Su's team generously gives credit to the USA for creating his entrepreneurial and innovative spirit that he says is part of his Taiwanese upbringing. His senior vice president, T.K. Ong, says the environment for success was created by the "moral and material support" provided by the USA to the island nation after it broke from mainland China.

While we all hope that the A Whale will prove to be a great success, it's important to recognize that a system of free enterprise is necessary to create that success --and hopefully many more.