NBC's "Today" is under fire for airing a segment that shamed moms who post breastfeeding photos on social media.

Appearing in avatar form, Gifford said, "There are two types of people, Hoda -- those who feel the need to share their most precious moments and those who'd like to keep it private like I prefer." Kotb responded, "I say breastfeeding is beautiful and natural, but sharing it on social media: TMI."

Kathie Lee & Hoda from Today Show Seeing breastfeeding is TMI for your precious eyes? So sorry to hear that maybe this will help. Spam them with your #Brelifes the more people see it the less "TMI" it is.

Posted by Breastfeeding Mama Talk on Thursday, May 21, 2015

In response to the segment, Virginia mom and breastfeeding advocate Jill DeLorenzo created a Change.org petition and organized a nurse-in during the May 23 taping of "Today."

"The content they aired is offensive to those of us nursing our babies," she told The Huffington Post. "It is also dangerous to highly impressionable new mothers who are just beginning their breastfeeding journeys."

"The purpose is to show that breastfeeding is nothing to fear or hide from, in contrast to the portrayal made by Kathie Lee and Hoda. Mothers will be nursing their babies peacefully and cheerfully," states a press release for the event. 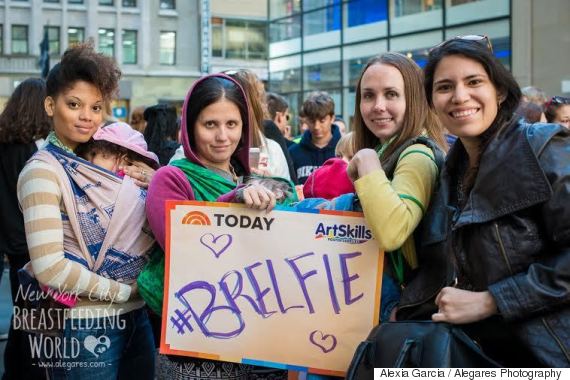 According to the press release, the moms staged the nurse-in with three demands for "Today":

While DeLorenzo was able to make it on camera briefly, the moms at Rockefeller Plaza found the experience rather "disappointing." DeLorenzo told HuffPost that many of the mothers' pro-breastfeeding signs were confiscated at the plaza entrance. "It was very upsetting that we were silenced," participant Lisa Maloney wrote in her recap.

Although the nurse-in was "not a complete success," Maloney added, "we will continue to bring light to a cause that is so important. We made connection and will continue to support together." 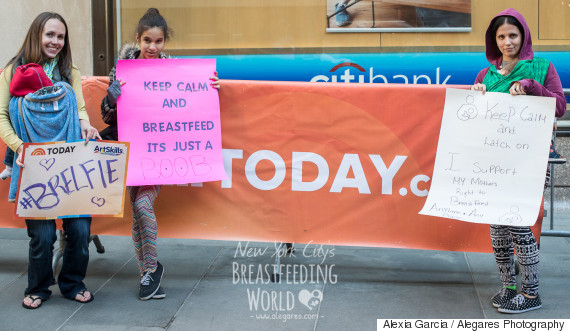 One way that the participants are continuing their work is through DeLorenzo's Change.org petition, which asks NBC to "stop shaming and censoring breastfeeding moms." With over 900 signatures, the petition is currently just shy of its 1,000 signature goal.

NBC has not yet responded to a request for comment.