So what was a mild-mannered, middle-aged librarian doing on the Today Show in the first place?

I'd written an essay, At Ease With A Body Fighting Gravity, about the fact that I'm more comfortable in a bathing suit at age 58 than I was in my youth, when I actually had the body to rock a Speedo. This, apparently, was so unusual that after it was published in the New York Times, a Today Show producer invited me onto the show to talk about it.

I had my doubts about whether a librarian gabbing about an essay would make for riveting TV. While I can be funny on paper, I'm no dazzling wit. You'd never use the words "life of the party" to describe me. Plus, the prospect of being national television was, to put it mildly, terrifying. At work, I'm always ready to entertain a crowd of toddlers with "The Wheels on the Bus" or "The Itsy Bitsy Spider." But entertaining millions of people on live TV?

That sounded more like an Itsy Bitsy Heart Attack.

My library colleagues assured me that I could do it. "If you can handle Tiny Tot Story Time," they told me, "You can handle anything."

Telling people that I was going to be on Today quickly became my favorite passtime. (I enjoyed watching their jaws drop.) Still, in my heart, I knew it would never happen. Me? On the Today Show? No way.

But then it did.

So what's it actually like to be on the Today Show?

It wasn't my usual day.

A limo turned up at 5 a.m. to drive me and my entourage (my sister Diane) from my suburban Philadelphia home to 30 Rock. (Trust me, this isn't how we librarians usually roll.)

After arriving we were shown to the Green Room (which isn't green. It's actually orange and purple). There was yummy-looking brunch chow I was too nervous to eat, wall-mounted flat screens playing the show I was about to be on (YIKES!) ... and Bryant Gumbel and Jane Pauley sitting together on a corner sofa, filming a promo.

For the next 90 minutes, I was efficiently passed from one ear bud-wearing, clip board-wielding young staffer to another, each of whom filled me in on what was happening and what to expect next.

"Roz Warren? You'll be here for 20 minutes, then we'll take you to hair and make-up."

Hair and make-up, it turns out, is just a beauty salon, but at warp speed. Fifteen minutes after I hit the salon chair, my straight blond hair had been transformed into something with shape and body, and my face spackled with glamorous gunk, including burgundy lipstick and heavy mascara, a look my sister pronounced "garish" when I rejoined her.

We waited in a new lounge with a random assortment of other garishly made up strangers, again watching the Today Show. A woman who'd been with us in the Green Room earlier was now onscreen, promoting a parenting book.

I was, I realized, on a TV Guest conveyor belt, swiftly carrying me toward my three minutes of fame.

"Your segment is scheduled for 8:35," a staffer told me. "It's a beautiful day, so you'll be out in the plaza instead of in the studio."

At 8:15, I was taken to a "dressing room" to change into the Eileen Fisher garb I'd brought with me. To my surprise, it wasn't a room at all, just a curtained-off corner of hair and make-up. I ducked behind the curtain, stripped down to my undies and suited up.

Once in Eileen Fisher, I felt more confident. I might soar on my segment or fall flat on my face, but at least I'd be well dressed. (And my local EF store had given me a whopping "She's wearing this on the Today Show" discount!)

My producer turned up to wish me well. My segment, she said, would start with an upbeat clip of AARP-aged women talking about feeling beautiful. Not only that, but staffers had offered any woman in the crowd watching the show who was over 60 the chance to "background" my segment, if she'd stand behind me holding a brightly colored placard proclaiming her age.

Sure enough, when I took my place on a chair out on the plaza, I was cheered by a happy group of middle-aged women (my peeps!). They had no idea who I was, of course. All they knew was that, thanks to me, instead of being stuck at the back of the crowd, they, too, were about to be on national television.

Two minutes before air time, Savannah Guthrie, a slim woman in a stunning turquoise cocktail dress, took the chair opposite mine, and shook my hand. (Folks have since asked if she looks as good in person as she does on TV. You'd better believe it.)

A writer I know who is often on television had advised me to look as upbeat and animated as possible. "You may feel as if you're grinning like a crazy person," she said. "But it'll come off great on camera."

I wasn't finding it difficult to grin. This was pretty amazing.

We were on the air.

Savannah Guthrie, is, without question, worth every penny they pay her. I am now her biggest fan. Guthrie made damn sure I didn't make a fool of myself on national television. Every question was calibrated to make me sound as if I had a clue. And when it became clear that I'd never finish my final anecdote in time, she zipped in, nailed the punch line, and ended the segment on a laugh from the crowd.

Okay, so maybe I'm biased, but I think it was terrific television.

Twenty minutes later my sister and I were back in the limo, headed home. (And by five that night, I was back at the circulation desk, checking in books.)

It was an amazing, incredible, once-in-a-life time adventure.

And I'm really glad it's over.

If you ever get invited onto Today, here's my advice.

Get plenty of sleep the night before. Bring your sister. Wear Eileen Fisher. Hope that Robin Sindler is your producer. Don't expect the Green Room to actually be green. Smile like a crazy person. Enjoy yourself.

And give Savannah my best. 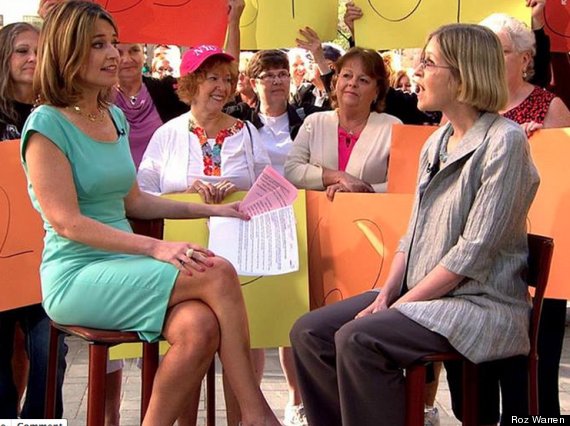