It all started on a plane ride to Montana. It was innocent enough. She had seen him from time-to-time around school and his name was occasionally brought up by a family member or close friend but they weren't really close. I mean, she knew of him but she didn't really KNOW him, you know?

And then came time to fly from Miami to Montana. I had reached out to a friend to get some background on him and she said he seemed sweet and both of her kids like him so really, what was the harm? He was a last resort, really. I wasn't going to introduce them unless times were desperate but three hours deep into a five hour flight we had reached desperate. So, I pulled out my cell phone and there he was, smiling at me and waving. He was bright, he was cheery, and he was calling. . . Elmo.

Of all the preconceived notions or plans I had about the type of parent I was going to be and the types of things I would or would not let into my child's life, Elmo was on the top of the list, that list entitled "Things my kid will NEVER get into because I know what's best... about EVERYTHING." Oh, the mega-mom I was to be! I was going to shield my kid from such awful, harmful things like drugs, violence, hate, pesticides, juice and Elmo! I was so sure of these things never coming into contact with my child that had you asked me if I had even seen an episode of Elmo in its entirety, I would have balked at your rational question, maybe paused to recognize that no, in fact I hadn't seen an episode, and then gone on my merry way. I once overheard a mom say to her toddler son, who was stepping on another child's Elmo doll, "Now honey, you don't hurt other children's dolls. Not even if it's Elmo," and I thought to myself, "Right? Ugh, Elmo sucks. We should 'high-five' or something."

But then we had to prepare for a cross-country plane ride from Miami to Montana and I needed some ideas on how to keep a 1-year-old entertained for hours and hours. He was my back-up plan. And, three hours into the flight, when I had used up all my tricks on keeping my kid entertained, I pulled out my cell phone and I started playing the "Elmo's Calling" app and Oh. My. Gd. You should have seen the joy on my kid's face. Well, OK, there were maybe 15 seconds of "What the h*ll is this?" but it was quickly followed by, "Never, ever, ever take this funny red man away from me." I was nervous that this app was a gateway drug to more and more Elmo. I was envisioning myself lying face down in a pile of red fur, suffocating in Elmo. I would not let him win! However, a few months after we came back from our Montana trip, I found myself purchasing a small Elmo doll. "Just this one doll," I said to myself. "One tiny doll won't hurt, right?" But then I made a rookie mistake. I told Bubbe that her granddaughter seemed to have fallen in love with Elmo and, sure enough, a week later, a giant Elmo "Hug-Me" doll arrived in the mail. It was only one short week later that the day finally came when my kid and I sat down and we watched an entire episode of "Elmo's World." 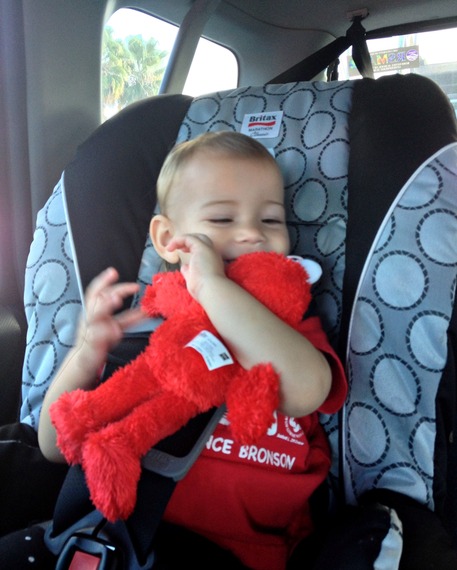 The kid and her beloved

Two things happened after watching that episode. 1) My kid's mind was blown. She loved it. L-O-V-E, loved it and, 2) I came to terms with Elmo. I mean, what was so bad about this little guy and what was turning me into such a judgmental idiot? Here was a puppet who had just spent 15 minutes showing my kid how awesome books are. Books! He even asked a cute little baby how he reads books. I found myself easing up on my judgments while watching that first episode and maybe, dare I say it out loud, liking Elmo a little bit. I mean sure, the voice can be annoying, but he's funny and he loves birthday cake. It wasn't so bad.

So, OK, the mass marketing of Elmo still creeps me out but all-in-all, I'm realizing that fighting Elmo isn't the fight I want or should be fighting. For my daughter, Elmo represents fun. For myself, Elmo represents the laundry-list of plans/assumptions I had about the things my kid would be into or even, the person my kid would become and how much I forgot to consider the fact that she gets to decide those things for herself, regardless of age. If one day she should want to check out that 'Barbie' character, then OK, that's her choice. It's my job to help her navigate this world not dictate her path. I want to trust my kid enough to make healthy choices or rather, trust myself enough to know I've set her up with the skills to make healthy choices. Not that Elmo or even Barbie are unhealthy choices, per say. It's just that I didn't expect that a little red puppet would make me hold a mirror up to myself and ask, "Am I really going to be THIS judgmental about a puppet? Drugs and video games? Yes. But a puppet that loves books and birthday cake? No."

More:
elmoMomsParenting Parentsmodern parenting
Newsletter Sign Up
Raise the kind of person you'd like to know
Subscribe to our parenting newsletter.
Successfully Subscribed!
Realness delivered to your inbox