Political asylum is not what it used to be. Just a few decades ago, almost anyone who fled the manifest dangers and oppressions of the Soviet Union, Vietnam, China or Cuba could reasonably expect to find safe haven in the "free world".

The Cold War was on, and political refugees played a central role in the narrative the West told itself. He who risked his life crossing the wall that divided East and West Berlin, or she who sailed into treacherous seas from communist Vietnam, reassured those who lived at the far end of the exodus that their way of life was something worth dying for. 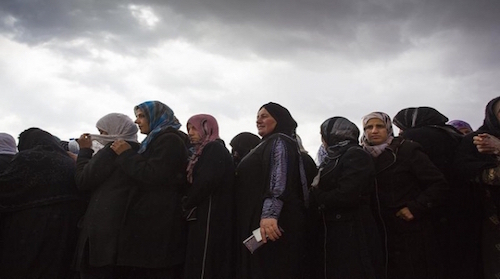 The escapees were daring, resourceful and brave - popular culture heroes. Look at the iconic photograph of the 19-year-old East German soldier Conrad Schumann, who seemed to defy gravity as he jumped to the West in 1961. The wall was just three days old, a roll of barbed wire rather than the heavily fortified obstacle it would become. West Germans shouted to Schumann, "Komm' ruber!" ("Come over!"). A police car pulled up, waiting to whisk him away to safety. And so he leaped into history.

President Ronald Reagan, in his farewell speech, even invoked a refugee story to explain the meaning of America. He described a Vietnamese boat person holding a ragged "SOS" sign and yelling "Hello, freedom man!" to an American sailor on a US aircraft carrier. The West - and the US especially, that shining city upon a hill - was on the right side of the old divide: a refuge, a beacon of hope.

But that mythology crumbled quickly as the Soviet Union collapsed and the Red Scare faded. The world's economies began to integrate; borders became porous. The trickle of asylum seekers from behind the Iron Curtain turned into a torrent of migrants from failed states and conflict zones all around the world.

About the same time the Berlin Wall fell, the term "forced repatriation" popped up. New waves of "boat people" escaping reprisals and depredations in Vietnam were rounded up and detained in Hong Kong. After a modicum of screening by the UN - whose asylum claim was truly valid? - many were sent back to Vietnam against their will. They too had come seeking freedom, but they came too late.

Today, the daring, resourceful and brave are once again fleeing political chaos, danger and potential persecution. In a sad commentary on early 21st century globalism, they have been transformed from heroes into inconvenient, unwanted trespassers. Their extraordinary travails, suffering and courage aren't that different from the boat people in 1975 or the East Germans in the 1960s. Refugees haven't changed. What has changed is the heart of the free world.

The US, in its largest refugee resettlement program ever, opened its doors to 125,000 fleeing South Vietnamese in 1975 right after the Vietnam War. The number of Syrian refugees America is willing to take in for the 2015-16 fiscal year is 10,000, and that quota was doubled from an earlier budgeted 5000 only after intense international criticism.

It's a similar story with Iraqis. There is a clear moral rationale for the US to help Iraq's asylum seekers, just as there was for the Vietnamese. In Southeast Asia, many who threw in with the Americans were later sent to re-education camps or stripped of their property; some were executed. In Iraq, US allies have been tortured and killed. There is now a backlog of 57,000 Iraqis hoping for resettlement in the US and the resolution of their cases moves at a snail's pace.

Closer to home, Reagan's Freedom Man is doing duty in the Border Patrol. In Arizona and Texas, tens of thousands of children languish in detention centres. Some trekked 2000 miles alone. They were smuggled by coyotes, or they hopped on trains, hitched rides and walked on foot northward. Some are looking for their undocumented parents here; some are fleeing danger and unstable conditions in Honduras, Guatemala and El Salvador. If given fair access to representation, many surely would qualify for asylum.

The US is hardly alone in its resistance to migrants. Global generosity is dwindling. Compassion fatigue has turned into fear as the world's comfortable states recoil from the idealism and promises contained in international refugee law. Their leaders, parliaments and citizens debate the fate of the "hordes" who might destabilise their societies.

Thailand and Malaysia tow boatloads of refugees back to open water, often without food or water, humanitarian considerations be damned. Muslim minorities fleeing Buddhist mobs in Myanmar are detained indefinitely in squalid camps across the border in Thailand. In Hungary and Bulgaria, where citizens once tore down border fences as the Cold War ended, razor-wire goes back up to fend off those clamouring on the European Union's doorstep.

What will happen next? Will the international community, in the face of enormous human suffering, find the will to override complacency and do the right thing? That would require a high degree of international co-operation and acknowledgment of shared responsibility. The dispossessed must first be protected; agencies that are overwhelmed must be funded; "durable solutions" - to use a term often heard from the Office of the UN High Commissioner for Refugees - must be found.

NAM editor Andrew Lam helped produce and participated in this segment on Al Jazeera about Vietnamese boat people whose stories parallel those of Syrian refugees today.

Will the US, which had a direct hand in creating the chaos in the Middle East, step forward with resources and leadership that equal its culpability?

"One of the marks of a global civilisation is the extent to which we begin to conceive of whole-system problems and whole-system responses to those problems ... " writes political scientist Walter Anderson in All Connected Now.

"Events occurring in one part of the world are viewed as a matter of concern for the whole world in general and lead to an attempt at collective solutions." Whether we can move toward such a "civilisation" depends largely on how we respond to the refugee crisis.

If collective action fails, so does globalisation, its premise of open societies and sustainable, equitable growth undermined by metastasising regional and international ineptitude. It will be as if the freedom story Reagan told at the end of his presidency were revoked: While poor, failed states suffer endlessly, the free world looks away, fortifying its borders, building higher walls.

If the West is extinguished as a beacon of hope, it will be our misfortune as well. The asylum seekers know the price of freedom; they treasure what we take for granted. They are living epic lives, whereas we, at the end of imagination, sit fearful and distracted, hands covering our ears and eyes, like poor, huddled masses.

Andrew Lam's family left Saigon for California at the end of the Vietnam War in a C-130 transport plane crowded with refugees. He was 11 years old. He is a senior editor at New America Media in San Francisco. He is the author of "Birds of Paradise Lost, a colelction of stories about Vietnaemse refugees in San Francisco, " "East Eats West: Writing in Two Hemispheres," a book of essays on East-West relations, and a memoir, "Perfume Dreams: Reflecitons on the Vietnamese Diaspora," a memoir. The above essay was originally published in the LA Times.