I last saw Todd Haynes thirty years ago in a semiotics class at Brown on "Pastiche and Parody". I remember him as the intent red-haired young man, always leaning forward, with two hands pressed on the desk, as he dialogued with professor Silverman about Baudrillard. He delivered his oral presentation on Genet with the same serious intensity. 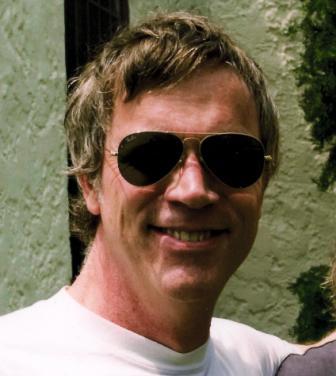 I glimpse him again, thirty years later, on the top terrace of the Cannes Palais, overlooking the Riviera. His new film Carol has just premiered here in Cannes to rave reviews. The red hair is now tinged with grey; the intensity has expanded into a relaxed grin. Perhaps the new jovial ease comes not only by the passing of decades, but by the phenomenal success of his film. Todd laughed heartily as he greeted journalists, who all enthused about the breathtaking beauty of his film, opining that it may win the great prize this year at Cannes.

For Carol, the story of a love affair between a young pretty shop clerk (Rooney Mara) and a wealthy unhappy housewife (Cate Blanchett), set in 1950s New York City, stuns with its sensuousness, reminding one of the Hollywood cinema of old, where the camera takes time with lingering shots on characters, turning them into stars. Based on a Patricia Highsmith novel The Price of Salt (1952), the story begins (after a flash-forward) with the timid young clerk spotting the wealthy commanding lady in a department store as the latter shops for a Christmas present for her daughter. We follow the clerk's sensitive still eyes as she stares with rapture at the mink coat, the elegant gloves, the sweep of coiffed blonde hair. Desire--glamour--is born from the gaze. We too become absorbed in watching. 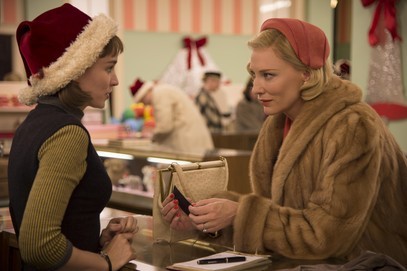 In fact, the gaze becomes the cinematic theme of the film. Acclaimed cameraman Ed Lachman films Therese, the shop clerk, with her eyes peering mournfully out a rainy window; he films her (after the two women have become friends) gazing obsessively at Carol's gloved hands on a steering wheel, as the two take their first drive together. In turn, Carol--when the dynamics shift--stares longingly at Therese's fleeting figure through the reflecting glass of a cab window. For the duration of the film, the two women alternately "look" at each other--their hands, their mouths, their eyes--with nothing short of obsession. This is desire, this is love. 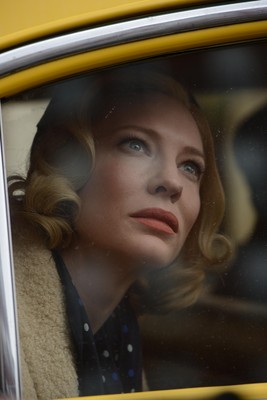 It is a love that is forbidden: lesbianism in the 1950s. Therese herself does not even know what to think of her overwhelming feelings of desire. She queries her boyfriend: "is it possible to love....a woman?" The climax of the film is a run-away road trip, with the two women escaping from social constraints into their own romantic world, going from one hotel to another, much like the celebrated escape of Humbert Humbert and Lolita. Throughout, we have a sense of secretive simmering passion--and taboo.

It is clear that the movie carries a social-political message, about societal controls on people's sexual intimacy, and the risks of choosing an alternative life style. Both women risk being ostracized--or worse--because of their affair. Yet what makes the movie outstanding is not the political message, but rather the alluring aesthetics of each shot: the snow falling on the wintry street; the landscape of Cate Blanchett's emotionally charged face; the eerie quiet in Rooney Mara's elegant eyes; the 1950s decor of Carol's mansion; the browns and greys of Therese's modest tenement apartment. The pace of the movie is quiet, pure, undisturbed by anything that is not essential to the story (and thankfully, as this is the 1950s, no cell phones, no texts, no "noise"). We are fixated on two characters, one story.

It is a movie that will remind many a spectator of the first time he or she fell in love.

But maybe it's not so simple.

I asked Todd if it was that simple. Could it be that his semiotics background, back at Brown, informs theoretically the way he construes the "construction of desire" (a term we often discussed in class) and "the gaze"? In Highsmith's novel, much is made of this "gaze" by the lower-class woman on the upper class.

"What is interesting to me about Highsmith's novel is that it basically links the desiring subject to the criminal subject because both are overproductive minds. The criminal narrator of Highsmith's Strangers on a Train is similar to Therese's mind in The Price of Salt as both have the same furtive hyperactive quality. Here the crime is love, and love is illegal. Therese cannot find the words for her desire; it is beyond syntax. She cannot piece it together. She is butting up against language and meaning and what she knows to be possible [in her social sphere]. When the two women finally do make love, then the desire comes into form: it can be stated."

Leaving the Derridean theory (quickly) aside, Todd turned to what seemed to be most at stake in this film for him: the shift of power from Carol, the wealthy middle-aged woman, to Therese, the enamoured petite young clerk.

"Carol is the emblem of the privileged class, a perfect manifestation of female glamour and elegance that disarms Therese and initially furthers her anxiety about who she is. Carol is a construct of Therese's imagination. In this film, we are always in the point of view of the more amorous character: the disempowered person. We shoot through windows and glass, to make you think of the act of looking and looking back, with people positioned on either side of the glass. When we think of our love affairs, our most memorable ones are those that put you on the side of the weaker and desiring subject."

I asked Todd why he, a gay male director, so often privileged the disempowered woman as the main character in his films, from his Barbie Doll Karen Carpenter to the paranoid allergic housewife in Safe.

"Stories about marginal women," he explained. "Are more interesting than films about men; they contain the limits of social burdens; women's lives are more burdened by society, in the choices they make, as they carry on the institutions of the family, satisfying men. There is less freedom in their lives. In films about men, you can pretend that these limits can be escaped [with heroic vanquishing stories] but not so much with women. Filming women allows me to show how we all share these restrictions."

As for the wonderful road trip--which adds such sparkle to the film--this too has a political undertone:

"The road trip is essential to the novel and the film, in that it is the only place where we think we are free from the constraints of society."

And yet the film has a fresh revolutionary undercurrent--and an exhilarating conclusion. The power dynamics between Carol and Therese eventually shift, as do as well their positions in society. As Todd noted: "Therese changes! She grows up, and by the end," he laughed warmly. "She wears a full skirt!"

In fact, Therese, the disempowered girl, [warning: plot spoiler!] , becomes, by the end of the film, an established confident photographer, her success launched by the photos she has taken of Carol during their road trip, photos that frame her face and body, putting the glamour in perspective.

It is her gaze that now dominates.

Some critics have asserted that the film is appropriately called "Carol", as Cate Blanchett's acting is extraordinary, but for me, the film could have been called "Therese", as I could watch the film over and over, just to observe her mysterious watching eyes.