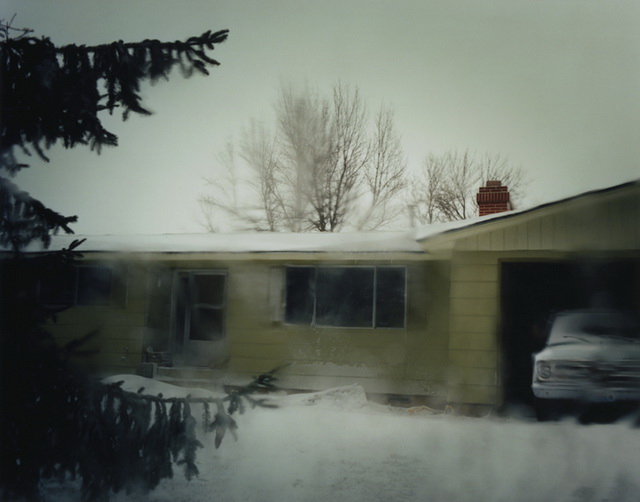 The press release for Todd Hido's recent exhibit Excerpts from Silver Meadows describes it as a "metaphorical reckoning with his own past," and indeed many of images look as they might in memory or old polaroids: blurry, the colors faded or over-saturated or yellowing, and darkening towards the edges. Hido even sets up many of the shots to replicate how these scenes would have been experienced in the most mundane moments, shooting houses from the vantage point of the driveway, or perhaps the neighbor's driveway, through frosted, clouded, or rain-spattered car windows. He manages to find rich colors in scenes most would dismiss as "gray": snow might have a rosy tone, an overcast sky edges toward purple. His outdoor scenes comprise a sort of anti-Kinkadian vision of the midwestern Anytown -- their very imperfections, both haphazard and contrived, create an atmosphere that has mood without nostalgic sentimentality, darkly beautiful and quiet and grim.

Hido's photographs of women, however, imply that the shabby trailers and tract houses standing in the gloom with their lights shining through the windows (a recurrent Hido motif) are not a simple reflection of atmosphere but in fact a concealment of the human turmoil within their homes. One cannot look at these deceptively banal settings in the same way after seeing their presumed inhabitants. Hido seems to have created three characters out of the real or mythologized women of his memory and imagination: the melancholic teenager, the "desperate housewife," and the Marilynesque sexpot. They exude different kinds of sexual availability, but all seem wounded, both physically and spiritually. A young naked girl slouches on the floor next to a bed, her face expressionless. She seems as blasé about her own nudity (and its implied purpose) as about the unexplained fresh scars on her breast and ribs. A seemingly conventional adult woman--pearls, perm, and perfectly-lined eyes -- stands in a completely unbuttoned cardigan, leaning forward slightly as if to encourage her breasts to spill out of her strapless bra. Her face looks drawn, on the verge of tears. She is sexually challenging -- or beseeching -- and she recalls the housewives Betty Friedan wrote about in The Feminine Mystique, who sought to assuage their dissatisfaction with the narrow domestic life to which they were consigned by a desperate and almost predatory sexual adventurousness outside their own households. 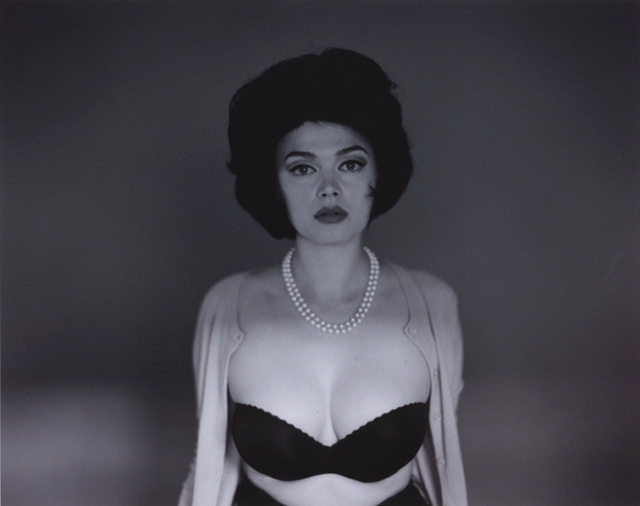 Most troubling is the third character, the "Marilyn," who only appears in a couple of works on display at Wirtz Gallery but whom Hido focuses on in the expanded series featured in Denmark's S magazine and in book form by Nazraeli Press at this year's upcoming Paris Photo. But she is not the most troubling because she seems the most victimized, although she does: in one image she is huddled on a naked mattress, crying, her stockings torn and running, her legs bruised. Hido gave her a comically exaggerated blonde bouffant wig, and lit her such that the shadow she casts seems to creep up the wall like in an old horror film. The theme of her physical lushness and apparent victimhood continues in other images from the series. Sometimes she's crying prone in the backseat of an old car, or bent over a seedy-looking hotel bed. She's troubling because she brings to mind one of the most familiar archetypes in American mythology: the woman with a woman's body and sex appeal but a child's helplessness and lack of control, the woman whose blessings benefit everyone but herself, whose sexuality is far more developed than any other aspect of her character. I admit I bristle whenever I encounter another incarnation of the "Marilyn." (I should make it clear that this is my own, and not the photographer's, label, as well as the fact that when I discuss "Marilyn" I refer to the actress's public persona, which grew to archetypal status in the popular ethos and which by many accounts differed significantly from her actual personality.) I find our continuing fetishization of the defenseless, self-destructive sex icon depressing, a contradiction of our proclaimed celebration of female empowerment. So when I see what appears to be a derivation of her, I want to be shown some new aspect of her persona, some variation on the archetype, something to assuage my worries that we bang on about the tragic sex object because for all our progressive talk, that's the sort of woman we like best.

I'm not sure Hido's portrayal of the Marilyn character offers new insights, but that in itself might say something about the series: if it is indeed a "metaphorical reckoning with his own past," and his past is populated by cultural leitmotifs (for the melancholic teenager and desperate housewife are familiar as well), or he sees them that way, then the great revelation here is in how popular myths dominate our perception of our unique experience. It's easy to scoff at the Mad Men episode, "Maidenform," in which Kinsey creates an ad concept by claiming that every woman can be grouped as either a "Jackie" or a "Marilyn." But maybe we are more affected than we like to think by the oversimplifications fed to us by a culture in which tropes and generalizations have more currency than nuance and idiosyncrasy. The press release was well-worded; Silver Meadows isn't about Todd Hido's past, but about his imperfect, highly-influenced re-experiencing of it: the strange pinkish snow, the house remembered through streaks of rain across a windshield, and the women whose distinctions have slipped from memory in favor of the hardier associations with cliché. Studying the photographs that comprise it might cause you to wonder how you will remember your own life, which elements will stick in the memory, which will change according to mood and impression, and which will take on the flat sub-realism of metaphor.