By Emily Gonzalez, Writer for CTWorkingMoms.com

"What a cute little boy!" says an unfamiliar voice behind me in the cereal isle. I turn to see an older woman peering into my baby carriage.

"Thank you!" I beam, "She's actually a girl. Not that it matters." The woman looks confused and gestures toward the baby, who is wearing striped pajamas.

It seems like I have interactions just like this almost every time I leave the house with my baby. I think we all have, right? I'm not a person who gets particularly annoyed or offended by this sort of thing, but it does make me think about the strange ways in which our society imposes and enforces gender roles from the moment our biological sex is known.

One thing that has been on my mind lately is underwear. We potty trained our oldest daughter about three months ago, and it was then when I first became aware of the weird and infuriating world of toddler undies. I'm just going to say it: Toddler undies are bulls**t. Bull. S**t.

So first of all, undies are apparently completely character driven. If you are in a store like Target, there are no stripes or polka dots to be found. Solid colors -- ha! My daughter wanted Mickey Mouse, which was fine by me. I felt a little silly when I got home and opened the package to realize that they had the little pee hole in the front for boys (aside: they don't actually use that hole, do they???), but my kid was happy. And frankly, I was a little bit proud of her choice.

But I was also kind of annoyed. My kid really likes Mickey but he was only on underwear intended for boys? My daughter really isn't even familiar with the female Disney characters. And not that I'm anti-princess, but... pretty girls with long hair on our underwear?? Must we?

Anyway, as we all know, one pack of undies is not enough. Over time, we accumulated many more. Our acquisition of a Minnie Mouse pack was the true turning point for me, because it was the first time I got to see that, at least for this brand, there is an inexplicable difference between girls' and boys' undies. Behold - same size, same brand: 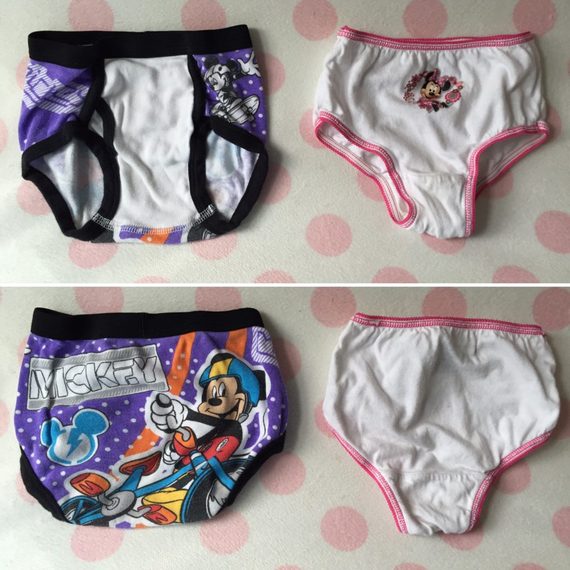 So the most obvious difference is the cut. The boys' undies are generous, full coverage. For some reason, the girls' ones are that "high cut" style that all women have learned to hate. Let's be honest, they go right up the butt, right? I see no reason for the cut of 2-year-old's underwear to differ by gender, except for the fact that society is already expecting them to be little men or little women instead of the practically genderless children that they are. Let's not forget that immediately before potty training, all kids are in unisex diapers. I can't imagine that their butts are really that different in size and shape by potty training age.

But we also need to address the fabric. The boys' undies are a soft, thick cotton. The legs are lined with more cotton, and the waistband is a nice elastic. The girls' undies are so thin. So depressingly thin, like tissue paper. The worst part is that the legs and waist are finished with this awful lace. The only thing worse than thin, depressing underwear in your butt is itchy, lacy stuff in your butt. In short, the Minnie Mouse undies go to school and into my diaper bag as extras for emergencies, but we stick to Mickey and Minions during the day.

Moral of the story? Girl stuff is inferior, and being a girl is uncomfortable. Life lesson learned. There you go, age two. Boom. Look, boys don't exactly win here either. God forbid a little boy doesn't like his choices. Can you imagine how people would react, knowing that a mom bought her son girls' underwear?

So, readers, fill me in. Are there brands out there that present better underwear options for toddler boys and girls?

This post was originally published on CT Working Moms.