Before our kids learn our language, we get to experience the magic of learning theirs. For an amazing (and amazingly short) period of time, kids speak a language that only their parents can understand. Have you ever been around a parent and their kid, and the kid looks at the parent and says, "Samoopeeepoop clababa pano pano it," and the parent, completely un-phased, replies with something like "No dear, you've had enough graham-crackers, and dinner is in an hour"?

I'm going to miss that connection with my kid. I like that, for awhile, my wife and I were the only ones who could understand her. But now, my daughter is getting much better at talking. Her language skills are really pretty amazing. She's almost mastered subject, object and possessive pronouns. She's getting tenses down, and every once in awhile, she'll put together a sentence with multiple clauses and a semi-colon. For example: "I want to lay in bed with you and mommy, who you call Stevie-pie, but I peed in my pull up and need a new butt; can you change it?"

Yes, it should be lie and not lay, but cut her some slack. She's 2. So, before she starts quoting Faulkner and writes a fan-fiction sequel to The Sound and the Fury, I decided now would be a good time to write down some of the toddlerisms that are slowly fading away from her mind, like the end of Flowers for Algernon, only in reverse... which, now that I think about it, would be the beginning of Flowers for Algernon. I digress.

This one can change and take on additional syllables depending on how badly she doesn't want to do whatever action she is resisting. For instance, if it is putting away her toy train it could be: "ADONAMANAMMANNAMANNNANANANA PUT AWAY MY CHOO CHOO TRAAAAAIIIINN!!!" Yes, it can be frustrating sometimes, but when adonamaa goes away, so does all the cuteness from her rebellion. Then it's just plain old rebellion.

This word is always said at my feet with outstretched arms, and is always said at least twice. "Kayeeoo... Kayeeoo Daddy." It comes from me asking her if she wanted me to carry her when she was slow and I was sick of waiting for her to catch up. I'd say "Want daddy to carry you?" So now she assumes that "carry" and "you" are one word that means "to carry." On instinct, I tried to teach her the correct way to say it the other day and my wife leapt across the room, screamed "NOOOOO," and then tackled me. She's resisting the change even more than I am.

This one just left her vocabulary a few weeks ago. I'm pretty sure my wife cried when she heard our daughter say "Can I have a strawberry?" I would give anything to have a recording of my daughter saying "I has a sawbubby?" I would make a million copies. I would keep one in the Smithsonian. But alas, sawbubby is gone forever -- a lost word in a dying language. ::sob::

There was a point at which I would have been completely comfortable with this pronunciation of fifteen carrying on into High School. I don't care how much damage it does. I'd pay for the therapy. I want my daughter to call fifteen "fiveteen," dammit!

I'm not going to use it in a sentence, just understand that for the last 6-8 months, every time my daughter has meant to say "Something," she has said something very different. It has made having company over oh so much fun!

It took me awhile to figure out what she was saying. Now, when people see me quietly stand up after my daughter tells me to shut up, they assume I'm just a broken shell of the man I once was, when really, we're just communicating!

Wanididid: I wanted to, and I did, as in, "I wanididid go potty daddy!!"

I love this one, because it only happens when she is so proud of herself that she doesn't have time to use multiple words. She just wants to tell me everything in one, awesome toddler word, and that is perfectly fine with me. "I wanididid count to fiveteen daddy!!!!" Yes you did, honey. Yes you did.

Habagooday: Have a good day!

I saved this one for last, not only because it makes sense structurally, but because it is my favorite. My daughter and I have a bedtime ritual. We brush our teeth. She spits all over her face. I wipe her face. We read a book. We read another book. She then tells me she would like to read four more books. I say no. She pretends to cry. I pretend to acknowledge her pretend cry. Then she gets in bed. We sing 1-30 songs. I give her a kiss and a hug. I say goodnight. She says goodnight. I say "I love you." She says "I love you." And then I get up and leave the room.

Every night -- and I'm serious here -- every single night after I shut the door, she yells "Habagooday!" I don't know where she picked it up. I don't care that it is night and not day. It is something that is wholly hers and I want it to stay that way forever. So I open the door back up, poke my head in and say back "Habagooday, I love you." And she loves me too. 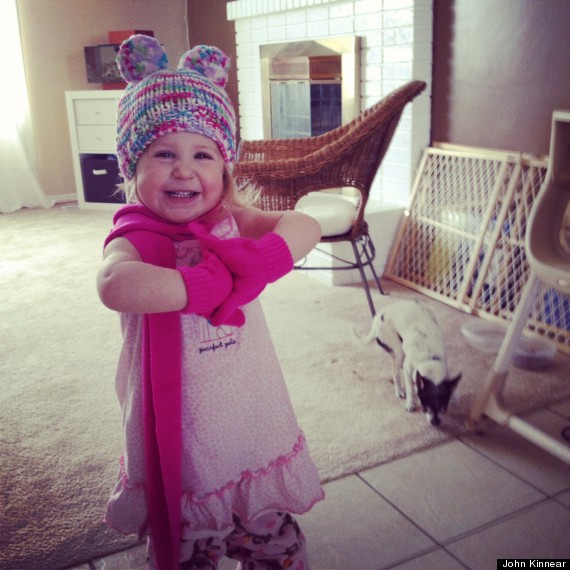 What toddler words do you love or miss with your kids? Leave them in the comments or tweet them to @HuffPostParents with #toddlerwords and we'll make a dictionary right here!

An earlier version of this piece appeared on John Kinnear's personal blog, Ask Your Dad.

More:
Toddlerscommunicating-with-kidsparents-toddlersparents-dadslanguage development
Newsletter Sign Up
Raise the kind of person you'd like to know
Subscribe to our parenting newsletter.
Successfully Subscribed!
Realness delivered to your inbox