With the passing of World Malaria Day on Saturday, it's a good time to reflect on the spread of malaria and what can be done about it. The bad news? The damage caused by the disease is immense. The good news? We're fighting back, we're making real progress and, if we're smart and make the effort, we can end malaria within our lifetime.

Health interventions are making a real and observable difference: 4.3 million lives were saved between 2001 and 2013, the vast majority of them were children under 5. Here's one of the most uplifting maps I've ever seen. It shows the massive decrease in child infection rates at the beginning and end of this period: 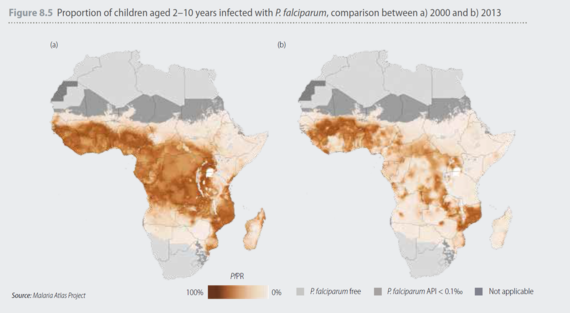 But the scale of the problem is still vast. Between 350 and 500 million people contract malaria annually. At first the symptoms are flu-like, but if left untreated it can lead to respiratory distress and severe anaemia. Ultimately, it kills around 660,000 people per year, mostly children and pregnant women in Africa, making it one of the world's biggest killers.

And now recent studies suggest that the impact of malaria is even more severe than originally thought. For starters, we now know more about the consequences of malaria during pregnancy. The disease and resulting anaemia lead to a higher rate of miscarriages, and children born alive are likely to weigh less at birth and grow up with higher blood pressure, causing problems later in life.

Even more alarmingly, recent research suggests that malarial fever makes people with HIV significantly more contagious. Some researchers have suggested that malaria may have contributed to the explosive increase of HIV/AIDS in sub-Saharan Africa in recent decades.

The upside of these grim facts is that work which limits the spread of malaria is doing even more good than previously realized. As well as reducing deaths and suffering caused directly by the disease, it also helps to combat miscarriages, hypertension and HIV across Africa.

So how are we fighting back against a disease of this magnitude?

Keeping the bugs at bay

Malaria is spread by mosquitos, which infect people when sucking their blood. This mostly happens at night, as the mosquitos are nocturnal; the key to stopping the disease from spreading is therefore to keep the insects at bay while people sleep. The data suggests that the most effective way to prevent infections is to provide people with long-lasting bednets, treated with insecticide to fend off the mosquitos.

The biggest and most effective bednet distribution charity is the Against Malaria Foundation (AMF). Founded in 2004, AMF has an impressive track record of mass distributions in countries like Malawi and D.R. Congo. So far it has raised $20 million and distributed over 5 million nets.

The effectiveness of bednets has caused some controversy. A recent article in the New York Times claimed that "countless [people in Africa] are not using their mosquito nets as global health experts have intended," preferring to use them as fishing nets.

However a comprehensive analysis of multiple studies has done the counting and shown that less than 1% of nets were repurposed for fishing. And most of those which were repurposed had already been too worn out to stop mosquitos.

Furthermore, monitoring data from Malawi (among other countries) shows high levels of continued use. After two years, 81% of nets distributed were still being hung up, with 77% still in serviceable condition.

Take a stand and change the world

There's still plenty more to be done. There are still thousands of people in at-risk parts of the world who do not have a net to sleep under, and who can only hope that infected mosquitos don't find them.

If AMF is to continue to expand its operation and bring bednets to additional countries, it will need more funding and more donations. The best estimates put the cost per bednet at around $6, so every additional donation makes a difference and could save lives.

Some people are taking an extra step, and helping by promising to donate money into the future. The organisation I work for, Giving What We Can, is dedicated to finding and promoting super-effective developing-world charities. It has gathered over 1,000 members since launching in 2009, each of whom pledge to give at least 10% of their income to the charities that will do the most good possible with their donations.

Our members have already donated more than $1 Million to AMF, which roughly translates to 200,000 bednets distributed. And because of their ongoing commitment, Giving What We Can's members will continue to make a huge impact in the years to come.

On current projections, it would take around $8.5 billion of effective donations to eliminate malaria entirely within our lifetimes. That sounds like a lot, but consider that individuals donate around $240 billion annually in the United States, and around £10.6 billion ($16 billion) in the UK. As more people start to understand that donations to effective causes (like stopping the spread of malaria) can do so much good, I'm confident that we can raise that money, and stop the disease in its tracks. But we need everyone's help to do it.

If we work together and use our money effectively, we really can create lasting change - both at the level of the individuals who don't have to suffer and die, and at the level of societies that become better able to grow and prosper. So why not take the world one step closer, by thinking about where you can donate that doesn't just make a difference -- that makes the most difference. We can end malaria in our lifetimes.

Hauke is the Director of Research at Giving What We Can, a global network that helps people donate to the most effective charities in the world. Thanks to Peter Orr for assistance in preparing this article

Director of Research at Giving What We Can