The Chinese dragon is a creature associated with water. Unlike its Western fire-breathing cousin, it is a benevolent creature whose flight through the clouds brings life-giving water to farmers each spring.

Today, a new breed of Chinese dragon is making a big splash. These dragons brings water not with clouds, but with the porcelain thrones of Chinese commodes. China's toilet bowl dragons represent a new generation of Chinese entrepreneurs and manufacturers catering to the raging thirst for high-tech toilets from China's growing consumer market for luxury products.

Chinese people have long been famous as steadfast savers, but a boom in leisure spending has revealed the hi-tech toilet seat as the new "it" appliance. An estimated 450,000 Chinese traveled to Japan during the Lunar New Year and spent between $941 million to $959 million mostly buying Japan's "Four Great Treasures:" thermos mugs, ceramic knives, rice cookers and toilet seats.

High tech electronic toilet seats from Japan were the go-to gift for Chinese consumers during this year's celebration of the Year of the Goat. The weakening yen, which has depreciated by nearly 40 percent against the Chinese yuan over the past two years, made the duty-free toilets a bargain for Chinese consumers.

Recently those electronic toilet seats sparked a furor when it was discovered that, like the toilet-buying tourists themselves, many of the toilet seats came from China. And those heated cheek warmers have heated up the debate on consumerism in China. The toilet seats were not widely available in Chinese stores, underlining a variety of problems plaguing Chinese consumers. China's consumers crave these high-tech toilet seats as an expression of their purchasing power, their modern lifestyle, the exotic and the luxurious - but they have to go to Japan to buy them.

The size of China's middle class -- defined by consulting firm McKinsey China as households with annual incomes of roughly $10,000 to $37,000 -- already rivals the entire population of the United States. At over 300 million, McKinsey China says that number could grow to 630 million by 2022. And what those Chinese crave as an expression of their new status is a la-di-dah Western-style toilet with a high-tech toilet seat that is manufactured in Asia.

Ma Yue, the general manager of China's largest manufacturer of electronic toilet seats, Xian Sanhua Ryoji Electrical Appliances, confirmed that during 2014, Chinese consumers bought about 300,00 electronic seats domestically. Of these, half were made by his company. That is only a fraction of the four million sold in Japan that year.

Mr. Ma has other statistics, citing the current use of electronic toilet seats by less than 1 percent of Chinese families, versus nearly ninety percent in Japan. After the media furor surrounding this story, Mr. Ma said interest on the part of Chinese consumers jumped dramatically. He is confident that his sales of electronic toilet seats will reach 30 million domestic consumers within the next five years.

The state-run Global Times newspaper cited the disparity between Chinese and Japanese products that show "the human touch, intelligent design and sophistication" but also pointed to the advances in Chinese-made goods. Others point out that Chinese goods are actually cheaper to buy in Japan. An editorial in the Beijing Review said: "In order to hold onto consumers who spend big outside China, the time has come for domestic enterprises and retailers to take action and fight for their share of the native market." Even China's premier, Li Keqian weighed in on the situation saying Chinese consumers should be able to buy the toilet seats at home. "At least, this would save the air fare for the consumers," said Mr. Li.

Mr. Ma's toilet seat factory, Xian Sanhua Ryoji Electrical Appliances, is located in Xian, close to Xianyang, the ancient capital of China's First Emperor, Qinshihuangdi. While most Americans know the Emperor for the army of terracotta warriors surrounding his tomb, Chinese point to the terracotta pipes that provided running water to the plumbing in his royal palaces.

Some Chinese see the toilet furor in a nationalistic light. They point to the country's glorious history of toilet inventions, including toilet paper and the flush toilet. In fact, the history of toilets in China is so ancient that China even has a goddess of the toilet.

GODDESS OF THE TOILET

The Chinese goddess of the toilet, Zi Gu Shen, literally, "purple young lady goddess," is described in the Taoist Compendium of Gods and Goddesses. Zi Gu Shen's story of lust, betrayal and the bathroom has parallels with the biblical story of David and Bathsheba.

Zi Gu Shen began as the beautiful wife of an actor during the Tang Dynasty (608-907 AD). A high-ranking minister named Li Jing fell in love with her. He killed her husband and took her into his household as his mistress. One day, as she visited the lavatory, the unfortunate Zi Gu was set upon by the minister's jealous wife and was killed in cold blood.

Her ghost haunted the water closet at all hours, preventing the minister's family from relieving themselves and making life unbearable. When news got out, Empress Wu , who knew quite a bit about killing one's rivals, blessed the ghost and elevated Zi Gu from human to deity. Zi Gu immediately ascended to heaven and the haunting stopped. The minister's toilet was safe to use again - except by the minister's jealous wife, though details are hazy. 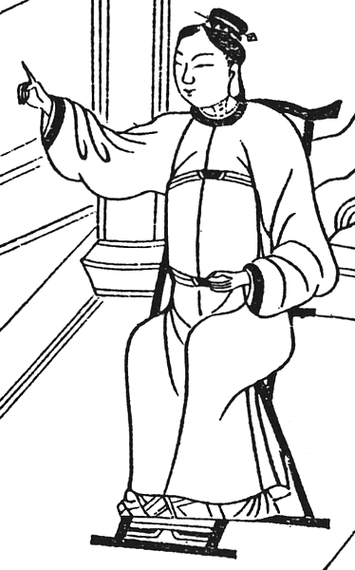 Zi Gu is reported to have been murdered on the 15th day of the new Lunar Year. For that reason, those who worship the goddess search for her on that evening. She is said to appear as a beautiful young woman above the waist, with her lower body covered in clouds.

For non-believers and modernists, there's Modern Toilet Restaurant, the brainchild of a Taiwanese ex-banker and entrepreneur. The restaurant chain has brought a whole new aspect to Chinese toilets that links them with Japan in a new, but spirited way. The idea for a toilet-themed restaurant emerged while the founder was reading the Japanese manga, Dr. Slump on the toilet.

Dr. Slump is set in Penguin Village, a place where humans, anthropomorphic animals and other objects co-exist. The stories about the world's most perfect little girl robot, named Arale Norimaki, are chock full of puns and toilet humor. Our heroine likes to "play with poop and swirl it on a stick." (I promise, this is an accurate description and translation.) 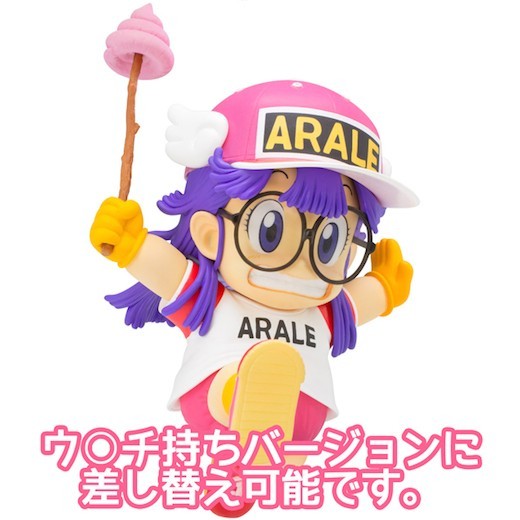 Inspired, the founder of Modern Toilet Restaurant began selling swirls of chocolate ice-cream in containers shaped like Asian squat toilets. The idea hit the spot with Taiwan diners - among the most discriminating and sophisticated in the world. Go figure.

The ice-cream chain was then expanded into a full-themed restaurant featuring toilet-chairs and bathroom-themed dishes. Meals are served in miniature toilet bowls and drink come in miniature plastic urinals sort of like souvenir toilet-themed plastic cups from a 7-11 Slurpee.

Logging onto the Modern Toilet web page, you can trace the fast-track success of this chain, that has expanded to Hong Kong and mainland China. Reading the "Future Business Philosophy and Direction section of the web page, you learn that Modern Toilet Restaurant feels that "In an age where creative marketing is king, even feces can be turned into gold." Good to know.

Some link the Chinese preoccupation with luxury toilets to the Chinese government's campaign to improve toilet facilities in preparation for the Beijing Olympics. A star-rated system for toilets was put into place, and millions of renminbi were literally flushed down Beijing's toilets bringing tourist site facilities up to new standards.

Doorless squat toilets were replaced by Western-style commodes. Facilities at sites like the Great Wall, the Summer Palace and the Forbidden City began to add amenities such as lotion, hot towels, emergency call buttons, background music and landscaping.

The upgraded facilities were welcomed by tourists. But the Chinese public needed help to adapt to the changes. The transition was accompanied by an educational campaign explaining the new facilities. 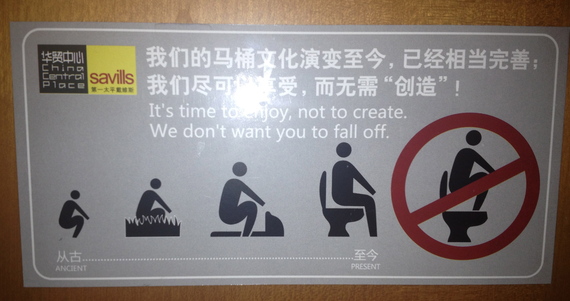 Once the toilet had achieved star-status, it's no wonder Chinese citizens began to see the the modern toilet as the "it" home appliance. One can only wonder, as Chinese exports continue to make their way to the American market and Chinese manufacturers dedicate their efforts at improving their products, will Walmart soon sell high-tech Chinese toilet seats to American consumers? Make mine the model without the built-in body fat analyzer. Thank you.