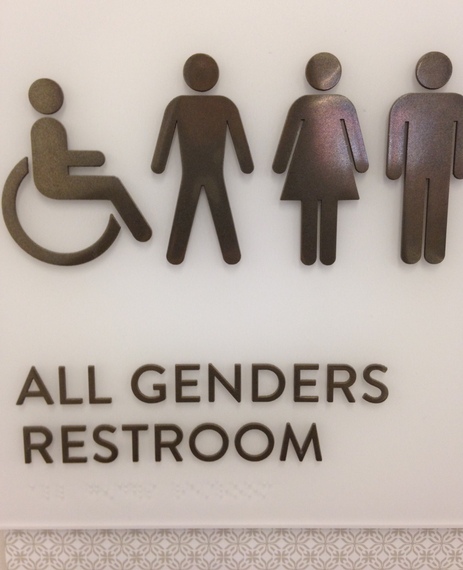 (An all genders bathroom at the Unitarian Universalist Association office.)

When the city of Charlotte, North Carolina, passed an ordinance to allow transgender people to use public restrooms matching their gender identities, the Unitarian Universalist faith community cheered the progress and inclusion that the city officials demonstrated.

Unfortunately, that celebration was short-lived. Governor Pat McCrory recently signed into law HB2, legislation that overrides Charlotte's enlightened and progressive ordinance. This discriminates against transgender people at a basic human level - the use of public restrooms. It is difficult not to see this legislation as a backlash against the Supreme Court's 2015 decision in support of marriage equality in particular and the growing social acceptance of the LGBTQ community in general.

At our Unitarian Universalist Association's General Assembly, the largest annual gathering of Unitarian Universalists, a sign is posted in every restroom. I wish that Governor McCrory had read it before he signed HB2 into law. Perhaps it would have enhanced his understanding of gender identity and gender expression. Here is a brief lesson in toilet training for Governor McCrory from our General Assembly bathroom sign:

"There are real impacts when bathrooms are labeled for women or men only. One of the places where oppression happens is in bathrooms. For transgender and/or gender non-conforming people, the use of public restrooms can come with emotional and physical harassment, deep discomfort, risk of arrest for being in the 'wrong' bathroom or even physical violence and death...Please trust that each individual knows which restroom is most comfortable and appropriate for them.

You are encouraged to thoughtfully examine and challenge your assumptions around gender identity and gender expression. We invite compassionate and ongoing dialogue around these issues, and as part of our work toward right relationship, it is important to remember that personal processing should not be done with transgender and/or gender non-conforming people."

Gender is a social construct and is not based on biological sex assigned at birth. Our laws are meant to protect the most vulnerable members of our society - and the assault and murder statistics are ample evidence of the vulnerability of transgender people. In signing HB2 and overriding Charlotte's municipal ordinance, Governor McCrory failed the people of North Carolina.

In the future, I hope Governor McCrory--and all our elected political leaders-- will educate themselves before they legislate. There are several excellent collections of educational resources on this issue including our own Unitarian Universalist transgender 101 resources and from Human Rights Campaign. I also urge state legislators to proactively craft legislation that prohibits gender identity discrimination in public places (like Massachusetts's stalled HB1577/HB735).

The Unitarian Universalist community is committed to seeing the North Carolina law repealed, blocking future discriminatory laws, and protecting the LGBTQ community in every corner of our society--including public restrooms.