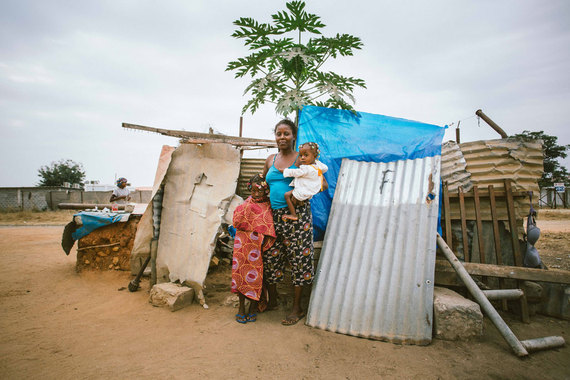 Maria and her children stand in front of the place where they go to wash themselves. Photo: UNICEF Angola/2016/Simancas

Puzzled looks, uncomfortable silence and confusion in the interpretation booths. These were among the reactions I received when I first began to talk about toilets and open defecation at the United Nations some years ago. This topic was not part of the diplomatic discourse at the time, but I had seen enough to know that it needed to be.

For me, the importance of access to clean water, sanitation and good hygiene, often referred to as WASH, became clear when I was the UN Emergency Relief Coordinator twenty-four years ago. In Somalia, I saw children dying of dehydration, dysentery and diarrhea... preventable illnesses. Since then, I have seen how the lack of access to water and sanitation has kept girls out of school for want of their own facilities, women from paid work because they spend too much time fetching water and entire communities struggling to stay healthy enough to work and take care of their families.

Substantial progress has been made, but the challenge remains. An estimated 1.8 billion people worldwide use faecally contaminated water sources. 2.4 billion people lack improved sanitation. In poor countries, 90 per cent of sewage is discharged untreated into rivers, lakes and coastal areas. Globally, more than 800 children under the age of five die every day from diarrheal diseases related to water, sanitation and hygiene.

Yet sanitation in particular remains an issue which is still viewed as taboo and not suited for discussion in the halls of power. But I felt many years ago as I do now, that we cannot turn the great challenges of our time into opportunities if we refuse to talk about them.

That is why I launched the Call to Action on Sanitation in 2013 on behalf of the Secretary-General, in order to mobilize the international community for WASH, especially for sanitation.

Last year governments of the world recognized the interconnected nature of so many of the challenges we face when they agreed on the Sustainable Development Goals (SDGs). These goals call for, among other things, an end to extreme poverty, and significant improvements in health, decent work and girls' education as underpinning sustainable development globally.

In recognition of WASH's role, governments also included a goal calling for universal access to water and sanitation by 2030. But the SDGs cannot be viewed in isolation. They are a tapestry, filled with interlocking patterns and threads.

While we once rarely discussed sanitation at the UN, now, thanks to the leadership of the Government of Singapore and others, we celebrate World Toilet Day every year to focus the world's attention on the need for universal access to sanitation. This year's theme is "Toilets and Jobs," which illustrates the opportunities inherent in addressing this complex challenge and the interconnected nature of the SDGs.

The case for investment in water and sanitation is strong. For every $1 invested in WASH, $4 are returned thanks largely to increased productivity due to better health and reduced absenteeism. Universal water and sanitation coverage would produce benefits valued to more than $220 billion.

Decent work and strong economies require WASH everywhere - in homes, in school, in health facilities and the workplace.

But leaving no one behind requires everyone doing their part. The challenges we face are too big for governments to tackle alone. I am heartened to see new initiatives like WASH4Work emerge in response to the SDG Agenda, as well as the new "WASH@Work Self-Training Handbook" by the International Labour Organization. These initiatives will help us mobilize and support businesses to ensure greater access to water, sanitation and hygiene, in communities and across supply chains.

Toilets are not handouts, they are economic engines. They are not luxuries, but delivery tools for better health. And they are not charity, but enablers of education.

My work in Somalia twenty-five years ago is still very much with me today. We have come a long way, but still have much further to go. But now, when I see colleagues at the UN, they give me surprised looks if I do not talk about toilets...

*Jan Eliasson is the Deputy Secretary-General of the United Nations.