Construction on the stadium, which will be the main venue of an Olympics that Tokyo organizers claim is focused on “sustainability,” began in December. By April, however, nonprofits that monitor logging activities in Malaysia discovered that the construction included wood supplied by Shin Yang, a company that has been “deeply implicated in the illegal logging of rainforests on Borneo,” according to an online petition that circulated this month, and it has been accused by the environmental nonprofit Global Witness of “carrying out highly destructive and potentially illegal logging.”

Environmental groups and activists will deliver roughly 140,000 petition signatures to the Japanese embassies in Switzerland and Germany on Wednesday. The petition calls on the Japanese government and international sporting officials, including the heads of the International Olympic Committee and Tokyo organizing committee, to help put a stop to the use of rainforest wood on Olympic construction projects.

The use of tropical wood from Sarawak, a state in northern Malaysia on the island of Borneo, the groups behind the petition say, would further threaten Sarawak’s vulnerable rainforests and hurt the indigenous people who live there.

There is no definitive proof that illegally logged wood is being used on Olympic venues. But in April, the Japan Sports Council, which is overseeing construction of Olympic venues, confirmed that lumber was being supplied by Shin Yang. And given the company’s history and the amount of wood it has exported from Sarawak to Japan, it is possible that at least some of the wood used on Tokyo 2020 facilities is illegally logged, said Rick Jacobsen, a team leader on international forest policy issues at Global Witness.

“It’s fairly unlikely but not impossible that for the Olympic stadium they’re using every piece of certified wood in Sarawak,” Jacobsen said. But without documentation from the company or committee to prove that, he said, “there’s no reason to believe that’s the case,” and sourcing from Shin Yang is a “huge red flag.”

Shin Yang did not respond to requests for comment before press time.

As part of its Agenda 2020 reforms approved in 2014, the IOC said Olympic bids should “respect the environment,” but it largely leaves the development of specific standards and policies to host cities and governments. The wood used on the stadium and other venues meets the Tokyo Olympics’ sustainability standards, the Tokyo committee and the IOC told Reuters last month.

The Tokyo 2020 organizing committee told HuffPost late Tuesday that all the wood used in Olympic construction has followed that policy.

“The Japan Sport Council (JSC), who are overseeing the construction of the stadium, reported to the Tokyo 2020 Organising Committee that the plywood in question has been certified by the Programme for the Endorsement of Forest Certification, an international non-profit organization dedicated to promoting sustainable forest management,” it said in a statement emailed to HuffPost. “They further confirmed it is in compliance with the legal and sustainability aspects of the sourcing standards set by the Tokyo 2020 Organising Committee.”

“The Tokyo 2020 Organising Committee remains committed to preparing for and delivering a sustainable Olympic and Paralympic Games, and will continue to work closely with the JSC and other related organisations,” the statement concluded.

The IOC said in an emailed statement that it “has been assured that the wood used for the Olympic Stadium meets certification standards. ... The diligent work NGOs are doing on sustainability best practices is highly appreciated, and we look forward to continued dialogue.”

But Jacobsen said the committee’s policy relies only on loose legal standards rather than more stringent measures that would ensure sustainability of the forests and communities that are affected by them.

The controversy and the online petition drive have thrust the Tokyo Olympics into the heart of long-running disputes between Sarawak’s indigenous population, companies such as Shin Yang, Japanese construction companies and the government of Japan, which, unlike the United States and the European Union, does not have strict laws governing the importation of illegally logged timber and other wood products.

The Penan people, the largest indigenous group in the Sarawak region, have fought Shin Yang and other logging companies for more than a decade, arguing that the logging practices are destroying traditional Penan lands and violating their human rights.

The Penan people have long inhabited and depended on the Sarawak rainforests, which have rapidly disappeared as logging has increased there since the 1980s. Eighty percent of Malaysian Borneo’s rainforests have been “heavily impacted” by logging, according to a 2013 study, while nonprofit groups have found that more than half of the Sarawak state is now covered by logging contracts.

The Penan have fought in Malaysian courts and appealed to human rights groups to stave off further logging, illegal practices and violations of their land rights. In addition to land destruction, those practices have threatened the Penan’s way of life. Logging has polluted water sources, destroyed traditional hunting grounds and left the Penan people unable to use wood to build their own homes and communities.

Companies like Shin Yang are “destroying everything, things we need in the forest like hunting grounds, trees, fish, medicine,” Bilong Oyoi, a Penan who traveled to Switzerland to deliver the petitions this week, told HuffPost. “Everything is gone.”

Though the Tokyo Olympics are not the cause of the disputes or the illegal logging, the Games have helped exacerbate the problems the Penan are facing through the use of rainforest wood, activists say. Olympic officials, meanwhile, have made only “empty promises” to address the issues, said Annina Aeberli, who leads campaigns for The Bruno Manser Fund, a nonprofit that works to protect rainforests and the people who depend on them.

Last year, a delegation from nonprofits that monitor logging and other issues facing the world’s rainforests met with IOC officials in Lausanne, Switzerland, and “explicitly warned the IOC that there will be unsustainable tropical wood use for the construction of the Olympic venues,” Aeberli, who was part of the meeting, said. “They promised to do something, but now we found proof that exactly what we feared has happened.”

The credibility of the IOC’s supposed commitment to environmental sustainability has already suffered thanks to the two most recent Olympics. The 2014 Winter Games in Sochi, Russia, were marred by environmental destruction and the arrests of activists who challenged the Russian government over it. The 2016 Rio de Janeiro Olympics, meanwhile, faced heavy environmental criticism after plans to clean up the city’s polluted Guanabara Bay and other waterways failed almost completely. The 2018 Winter Olympics in Pyeongchang, South Korea, have also faced criticism for clearing forests to build ski runs.

Over the last year, Japan has adopted new laws aimed at further regulating its timber importation practices. But those laws have faced criticism that they still may not go far enough to protect areas like Sarawak.

The need for further protection of Sarawak’s rainforests and the Penan people, the activists say, highlights the importance of the IOC and Tokyo 2020’s ability to live up to their commitment to environmental sustainability. But it will require action before Olympic construction proceeds too far for it to matter.

“The Olympics is an international symbol that gets a lot of attention,” Aeberli said. “If they do things well, they have an impact on other companies or events. We really hope that they take this as an occasion to make some positive change.”

“This can be stopped before there is no more forest,” said Komeok Joe, a Penan who also helped deliver petitions in Switzerland. “The people are suffering. Their livelihood is difficult and disappearing. This is our message ... to protest this kind of encroachment for the construction of the stadium in Japan.”

This article has been updated with comments from the Tokyo 2020 organizing committee and IOC. 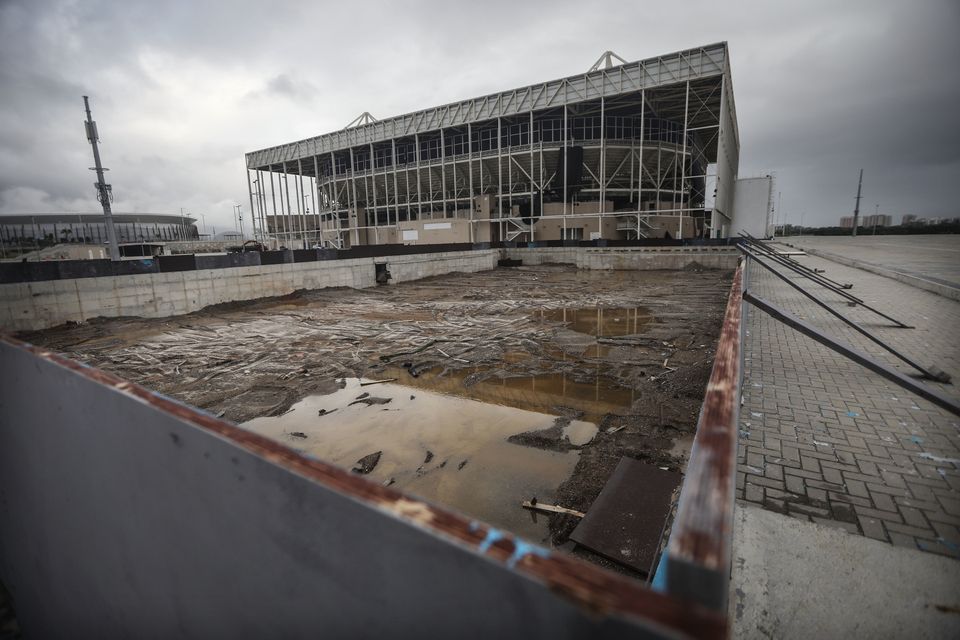 1 / 14
The remains of the practice pool in front of the Olympic Aquatics Stadium at the Olympic Park on March 18, 2017, in Rio de Janeiro.
Mario Tama/Getty Images