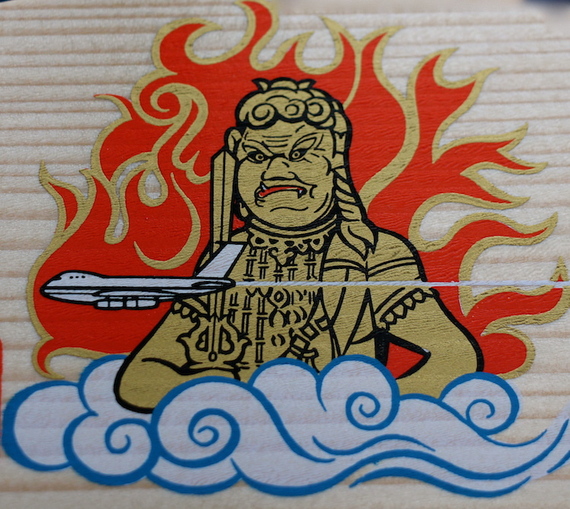 Smooth skies with this guy at your side! Photo by Gail Nakada.

At a little Buddhist temple near Tokyo's Asakusa district, the priests take the concept of 'god is my co-pilot' to a whole other level.

The only way to travel for most people in feudal Japan was on their own two feet. Before knotting up those straw sandals and setting out from the capitol of Edo (old Tokyo), travelers stopped at Tobi Fudo Temple to pray for a safe journey. Since 1530, this temple's demonic Fudo Myo-O deity has been legendary in his power to protect worshippers. 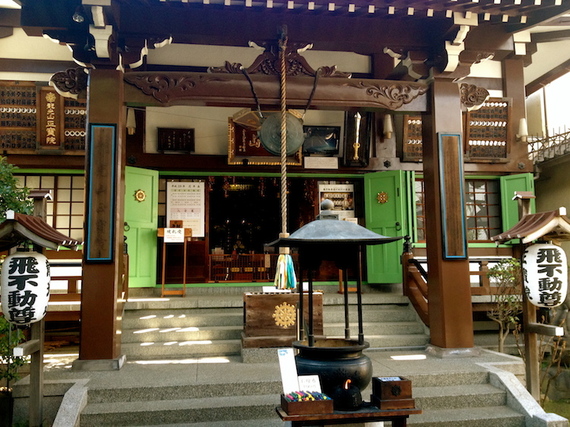 Buddhist Tobi Fudo has been protecting travelers since 1530. Above the altar is a model of the Fudo's demon-slaying sword. Photo by Gail Nakada.

Don't let the word 'demon' mislead you. Or the Fudo's terrifying fangs. Or the fact they are generally pictured wreathed in flames. Fudo have got your back - spiritually speaking. Fudo Myo-O are Buddhist deities full of compassion and the strength of righteousness. They actually started out in the Hindu pantheon before being hijacked to Buddhist doctrine. 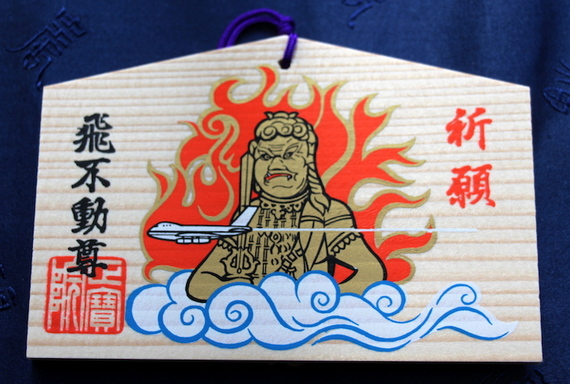 The front of Tobi Fudo's ema tablet with its classic Jumbo Jet image racing across the sky under the watchful -- and scary -- glare of the Fudo deity. Photo by Gail Nakada.

Fudo are often shown with a sword in one hand - to kill demons - and a cord in the other - to bind them. They are total bad-asses in protecting humans. And, despite using fire as one of their elemental weapons, Fudo are also worshiped in Japan for their ability to protect households against fire. Go figure.

The temple is officially called Tobi Fudoson Shoboin. The word 'tobu' means to jump or fly. Once plane travel became the norm and the Japanese were slipping on flip flops before jetting off to faraway lands, Tobi Fudo knew it had to remain relevant. Savvy priests expanded their mandate from travel safety charms, Ryoko Anzen, to include travel by air, Koku Anzen.

Word of Tobi Fudo's history and their lucky airplane deity spread to international flight crews and pilots. For decades now, airline personnel and even military pilots from all over the world stop by to pray for safe travels and pick up a Koku Anzen Omamori - a safe flight charm. 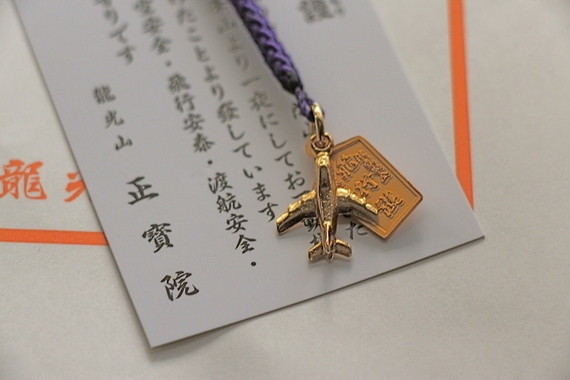 This airplane charm has become popular with flight crews and airline personnel from all over the world. Photo by Gail Nakada.

Because so many visitors come from overseas, the temple has signs placed around the grounds in English describing the parts of the temple and the votive objects. Very handy!

What to Buy: Japanese white-knuckle flyers make it a point to purchase an ema (a wooden votive tablet) to ask for a safe flight. On the back, they write their name, airline, and even flight number - just so the Fudo guardians know exactly which flight to watch out for. Visitors from overseas will want to buy and keep one as a great lightweight souvenir. 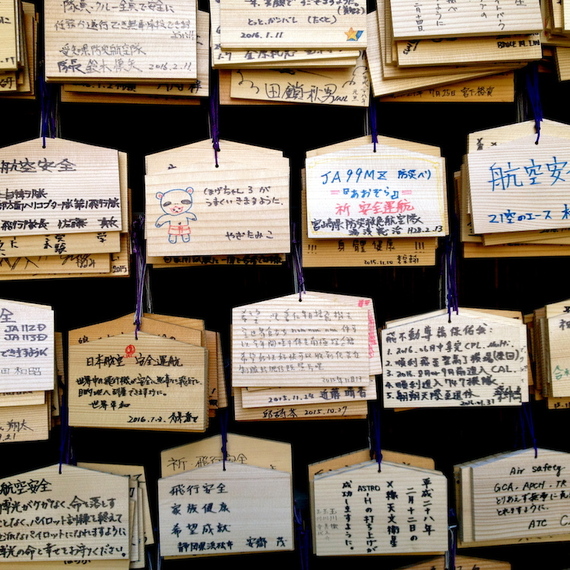 Visitors write their travel plans and even flight number on the back of these tablets, asking for a little Celestial vigilance. Photo by Gail Nakada.

Not to be missed is the temple's famous airplane flight charm, the Koku Anzen Omamori, for six hundred yen. I have one myself and look! I'm still here!

Ah, Japan. This country has a temple devoted to everything you can think of - and some you haven't!

Access: Located near Asaksua and just around the corner from popular Otori Jinja Shinto shrine. Otori Jinja is an easy ten-minute walk from Iriya Station, and Tobi Fudo Temple only about three minutes beyond that.

From Iriya station, Hibiya Metro line, take Exit 4. With the exit at your back, go straight ahead and turn right at the next light. Keep walking. This street dead ends right at Otori Jinja shrine. Instead of going to the shrine, turn left and walk to the next light. Turn right at the traffic signal and walk to the next intersection. Tobi Fudo is just a few yards along the road on your left. You'll see the white paper lanterns lining the entrance.

Before or after your visit to Tobi Fudo, be sure to stop at lucky Otori Jinja. Read more about it and other lucky shrines on Huff Post here.

More:
travelJapantokyofear of flying
Newsletter Sign Up
An essential daily guide to achieving the good life
Subscribe to our lifestyle email.
Successfully Subscribed!
Realness delivered to your inbox