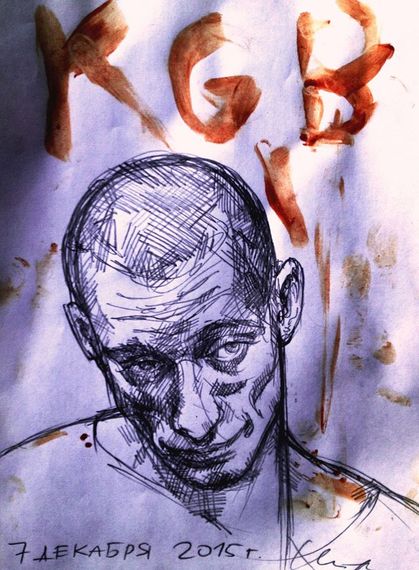 "As I am writing these lines, I have a broken knee, a crack in my rib and internal bruising," Pavlensky wrote, calling the incident "the consequences of a usual transit [while escorting prisoners]," he said in a letter published by his partner and companion Oksana on Facebook Tuesday.

Political performance artist Petr Pavlensky sets fire set fire to the entrance of the headquarters of the FSB security service (the ex-KGB). Pavlensky called his performance "Threat". The fire was extinguished, and Pavlensky was detained on suspicion of hooliganism.

Via The Moscow Times:

Criminal charges against performance artist Pyotr Pavlensky -- who set fire to the entryway of the Federal Security Service -- have been reclassified from "vandalism" to "damaging a cultural heritage site," the Interfax news agency reported Tuesday.

Pavlensky's lawyer Dmitry Dinze told Interfax that Pavlensky, during a court hearing on Tuesday, said that the changes had been made "recently."

Under the new charges, Pavlensky may face up to six years in prison, while the maximum incarceration for "vandalism" under Russia's Criminal Code is only three.

Firstly Pavlensky became known for sewing his mouth shut in political protest against the incarceration of members of the Russian punk group Pussy Riot. His first performance was called Seam and was made by him on July 23, 2012, at Kazan Cathedral, St. Petersburg. 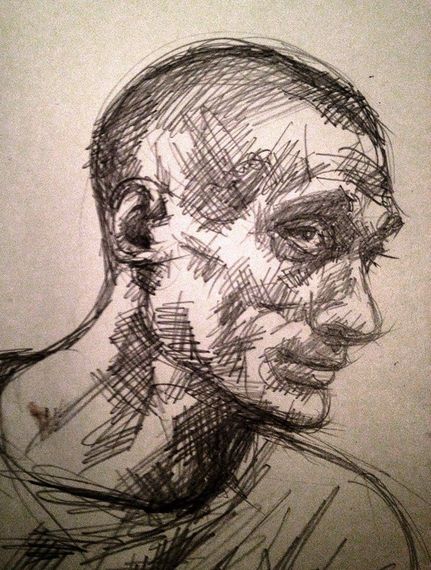 At the same time, I conducted a 25-day hunger strike in support of Pussy Riot, drawing portraits Nadezhda Tolokonnikova and Maria Alyokhina using nothing but lipstick.

Pavlensky's art is political, but his art is much bigger than the Russian politics. Like any art it's deeper than any politics, it is an existential confrontation of the individual little person. Pavlensky art is sequential and logical: he sewed up his mouth, he naked wrapped in barbed wire, he nailed himself to Red Square, he showed us that the FSB headquarters are not protected... As an artist and a citizen Pavlensky says more than a thousand others, that over the years years criticized of the current regime. Because actions speal louder than words! You may recall the story of Jesus of Nazareth, who was also weird and did strange wonders. He was persecuted, ridiculed, judged and convicted. Pavlensky is truly free, a person who has been claiming victory of the will of a lonely weak person over the system, over an endless fear. Pavlensky's protest actions evoke strong feelings. All those who demand to punish him, to be imprisoned, to be put in a mental hospital, they are the ones who made him an artist, because every artist depends on the viewer's reaction. In a totalitarian society with a destruction of political freedoms, including the freedom of expression, any manifestation of the freedom of expression is valuable, it may be a rally, gathering signatures, a punk show or an art event, these manifestations of freedom are necessary, but they are meaningless at the same time, because they give the totalitarian authorities an excuse to tighten the screws, referring to the "protection of peaceful life" of the people. A symbol of the violence of the state over the individual in Russia is "Lubyanka" -- the Federal Security Service (ex-KGB) Headquarters. In the cellars of Lubyanka during the Great Purge tens of thousands of people were killed and tortured to death. 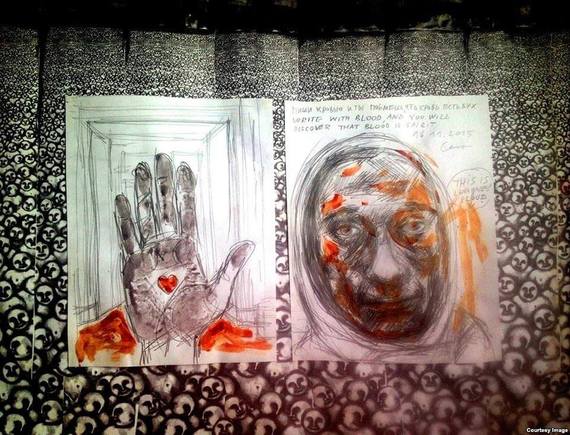 To set fire doors of the Lubyanka on fire, means to set on fire to the Gates of Hell.This is the true meaning put into action by a fearless artist Pavlensky - he burned down hell itself! Russian Politician, Member of the State Duma Dmitry Gudkov wrote about the artist "Pavlensky is a true artist, yes. Another thing is that such an enthusiasm towards Pavlensky's performance -- is a very alarming symptom for our authorities".

Moscow art dealer and cultural promoter Marat Guelman said about the Pavlensky performance, "The imagery of the doors of Lubyanka as the Gates to Hell, the source of evil, is very strong."

On November, 10, 2015, I started a series of Pavlensky portraits. He seems to me a kind of nietzschean overman, who "writes with blood", because "blood is spirit". 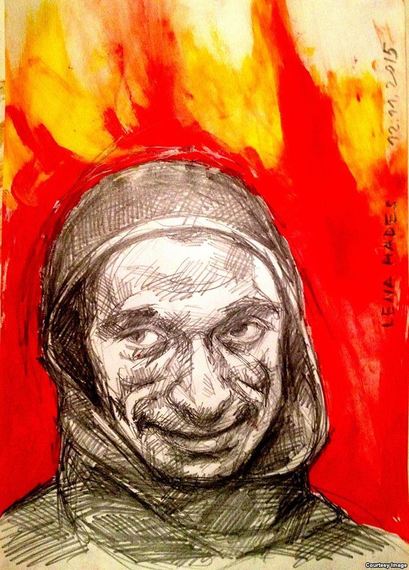 Nietzsche wrote in his writing ECCE HOMO:
"Yes! I know whence I come!
Like a flame, unsatisfied
I glow and consume myself.
All that I touch, turns to light,
All that I leave behind, is coal:
Assuredly I am a flame"

In my opinion, this is one of the strongest Nietzsche's poems. And the last action of Pavlensky is just the embodiment of this poem. Pavlensky himself is a real flame.