WASHINGTON -- The phones at Milwaukee Mayor Tom Barrett's (D) gubernatorial campaign headquarters were clogged all day Tuesday after an unsolicited text message went out to cell phones accusing Barrett of being a "union puppet" and telling Wisconsinites to call his office and complain.

The message, from "WI@obamasaliar.com," read: "Tom Barrett is a Union Puppet who will give Union Thugs everything they want. Call & ask why 414-271-8050." The number goes to Barrett's office.

View an image of the message, passed along to The Huffington Post by a Wisconsin source: 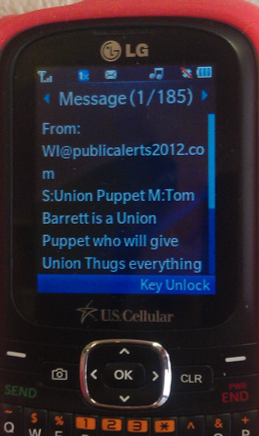 Barrett spokesman Phil Walzak said the calls began Tuesday morning. The phones in the office were operational, but "clogged" during the day. The calls continued into Tuesday evening. Walzak blamed the campaign of Wisconsin Gov. Scott Walker (R) and his allies.

"We know that someone is playing a dirty trick on Tom Barrett. It has to be either Gov. Walker or an ally of Gov. Walker who is behind this," "Walzak said. "The sole purpose is to disrupt this office's operations. ... We have been able to complete our tasks and continue moving our ball down the field with no problem, despite this attempt at a disruption."

Ciara Matthews, spokeswoman for Walker's campaign, called Walzak's accusation "ridiculous." She said the first the governor's campaign heard of the text message was from the media. The campaign also started receiving random calls -- from Wisconsinites who believed the Walker campaign was behind the texts and wanted to complain or compliment.

"Once again, Tom Barrett and his campaign, with absolutely no evidence to back up their claim, is making an outrageous accusation of Gov. Walker and his campaign," said Matthews. "This is a complete figment of their imagination. Our campaign had absolutely nothing to do with these text messages. We don't know where they came from, or who is behind them. This is becoming habitual for the Barrett campaign. Something happens that they don't like, and they just make an accusation out of the blue."

Daniel Bice of the Milwaukee Journal Sentinel reported that one woman who received the message said that all the members of her family who have Sprint phone service received the text.

Walzak told The Huffington Post that the campaign heard from a significant number of Democrats and Barrett supporters who received the message and were "fired up even more as a result of these dirty tricks."

Scott Goodstein was the external online director for Obama for America and is founder of Revolution Messaging, a progressive strategy firm that has been working to expose text-message spamming in political campaigns. His group is running a petition opposing the tactic.

"Each year we see technology used to encourage people to get out the vote," he said. "Sadly these innovations end up in the hands of evil when the stakes are high. What we started during the Obama '08 campaign, to use opted-in text messaging to increase voter participation, has quickly been sabotaged by the right-wingers that conduct voter suppression through the very same mobile gateway. These spam text messages should be stopped and we need the public to speak out against this spam tactic. This is no different than auto-calls being used in the early 90s to increase turnout. ... These spam text messages are even worse -- because not only are they annoying and misleading, they actually cost consumers money to receive the SMS."

Voters go to the polls on June 5 for the recall election.

Email us if you know more about this text message or any other dirty tricks in the Wisconsin recall.