Tom Bergeron picked up the Emmy last night for Outstanding Host for a Reality or Reality-Competition Program. The ringmaster of "Dancing With The Stars," which premieres tonight, has won over audiences with his sense of humor, boyish good looks and the fact that he's a happily married man of 30 years who truly loves his family. We caught up with Bergeron, 57, to find out what it's like to host a top reality show, discuss his status as a "recovering mime" and get his take on the art of staying sane in Hollywood.

I see on your Twitter profile that you are a recovering mime. So cute, but seriously?

That's right. I studied and performed and even taught mime years ago. I grew up loving silent film comedy, Charlie Chaplin & [Buster] Keaton, [Harry] Langdon and [Harold] Lloyd... Physical comedy was always a love of mine, so when I was interested in performing at some capacity, a local college -- where I was doing a radio show at the time -- offered a mime course. I thought, "I'm going to try that." And I really took to it. ... I wrote a book a few years ago that is currently holding up some of America's finest windows. [It's called] "I'm Hosting As Fast As I Can: Zen and the Art of Staying Sane in Hollywood." There is a picture of me doing street mime in old Montreal.

What is the art of staying sane in Hollywood? Is that even possible?

At the end of the book I allude to the fact that it's really the same about being sane in Hollywood as anywhere else. There's a subtext in the book about meditation, about being present, about being alive to the now of your life, and that is really, I think, the key whether you're in Hollywood or in Poughkeepsie.

Tell us five things we don't know about Tom Bergeron.

Let's just say there's four of them you don't know because I don't want you to know, and the fifth one you'll have to find out on your own. (Laughs)

Is there anyone I can pay a few bucks to to find these things out about you?

No, my personal life is closely guarded.

Huff/Post50 did a profile of 20 celebrity couples who have been married over 25 years ...

I saw that. I read and looked at it. It's funny because I think I was [about] the only one in a solo picture. (Laughs).

You've been married 30 years. What's the secret to a long happy marriage for you two?

Not taking [marriage] for granted and knowing -- like anything -- it's a growing, living thing; you don't exchange vows, put on the ring and then say 'OK, that's done.' You've got to keep it alive and real as you grow and as your experience in life grows ... as parents, and now we're sort of semi empty nesters. We're both very strong people individually. We know that we'd be OK on our own but we're much better together. I think that we constantly renew that choice to be a team.

How did you meet Lois?

I was doing my nightly radio show which I did for a few years in Portsmouth, NH.... And then, the first night, I see this very hot red head walking around. She's sometimes operating a camera, other times kind of barking orders at people and swearing like a truck driver. I thought: I gotta meet that woman.

What was your pick-up line?

I invited her and her co-workers to come to a live show. We were doing a live broadcast -- sort of a takeoff on SNL from what was then Theater By the Sea in Portsmouth. It was sketch comedy that I had written with some of my co-workers and I was doing improve. The show went very well but it was freaking her out. She was thinking: 'Oh, God, the last thing I want to do is get involved with a performer.' She told me later, "I thought you were going to be insufferable. I thought you would just be basking in all of this post-show adulation." And what I really wanted to do was get out of there. Because after the show is done -- as anybody at DWTS can tell you, I'm the first one out of that building. (Laughs) I leave almost skid marks. I think the pick-up line which wasn't intended to be a pick-up line was just her watching me not want to bask in this post-show stuff but to go out and have a real evening.

How did you get the call to host DWTS?

I got the call from my agent. ... it was like February or March of '05, and she said "ABC wants you to do a summer show, and you're going to do it." And I said, "Oh, really? What is it?" She said, "It's live. You love live television." I said, "Well, that's true, what is it?" She said, "It's a big hit in England!" I said, "OK, fine, what. is. it?" She said, "You've got to promise me before you answer yes or no, you're going to look at a DVD of the British show, and then decide." I said, "OK, that's fair enough... what is it?" She said, "It's a celebrity ballroom competition." I said, "Are you kidding me?! What don't you just cast me in an infomercial and put a bullet in my career!" (Laughs) And then the next day, I didn't look at more than 20 minutes of the show ... and I liked it. I liked that it was a hybrid of old-style variety with modern reality. I liked the fact that it had a sense of humor about itself ...and I thought, you know, it's going to be a six-week summer show, what's the harm? And it's proven to be one of the real gifts of my career.

Give me a little take on Bruno Tonioli, Len Goodman and Carrie Ann Inaba as judges. When I watch the show, and I listen to their critiques, there are times when I think: are they watching the same dance I just watched?

I have that experience with all three of them sometimes. And I'll grant you, I'm not schooled -- even after having been doing this for seven years -- I still am apt to be swayed by the emotion of something as opposed to the technique of it. It's their job to be technically aware as well. Len is much stricter about the rules of the dance then say Bruno or Carrie Ann might be. But certainly there have been times over the run of the series where I look at them like they have three heads -- individually have three heads (laughs) -- because I just don't see the same dance.

In the past you've had more than a couple of celebrity dancers that really did not take the judges critiques very well. Michael Bolton and Billy Ray Cyrus come to mind -- not that I blame them. After the show was everybody OK?

You know, I don't know if all those bridges were mended. Ultimately, I think some people took some of the criticisms to heart, and on occasion, some of the criticisms -- to be fair to the stars -- maybe got a little too personal or over theatrical. But that's the nature of live TV ... and that's the pleasure of it. You never know. I stand there waiting -- just like you guys do watching at home -- when is this going to go off the rail? But when it happens, it's real emotion. And it's fascinating to be part of it, and in my case to be a bit of the ringmaster, to try to get it back on track.

I asked Jonathan Winters recently how it feels to be 86. So I want to know from you, how does it feel to be 57?

I actually feel, in a lot of ways, that I'm in better shape than I was when I was 30. This isn't what I thought 57 would feel like. I thought I'd feel a little bit like a cooling ember. I don't feel that way at all. As a matter of fact, I'm sitting talking to you after I had a training session at the gym. I love this time of my life. I love who my kids are as young adults, and certainly I have been fortunate with the way my career has gone, and Lois and I are having a wonderful time and are still as strong as ever. So it's good.

If you could have a do-over in your life, something you could take back and do it over again, what would it be?

Oh, that's a really good question. I would not have hosted to 2008 Emmys. I would have gone with my gut instinct and said, "Great idea as a press release, lousy idea as an actual show." (Laughs) That would be my do-over. I would have politely passed and held my ground.

For more of Pat Gallagher's interview with Tom Bergeron, visit her blog. 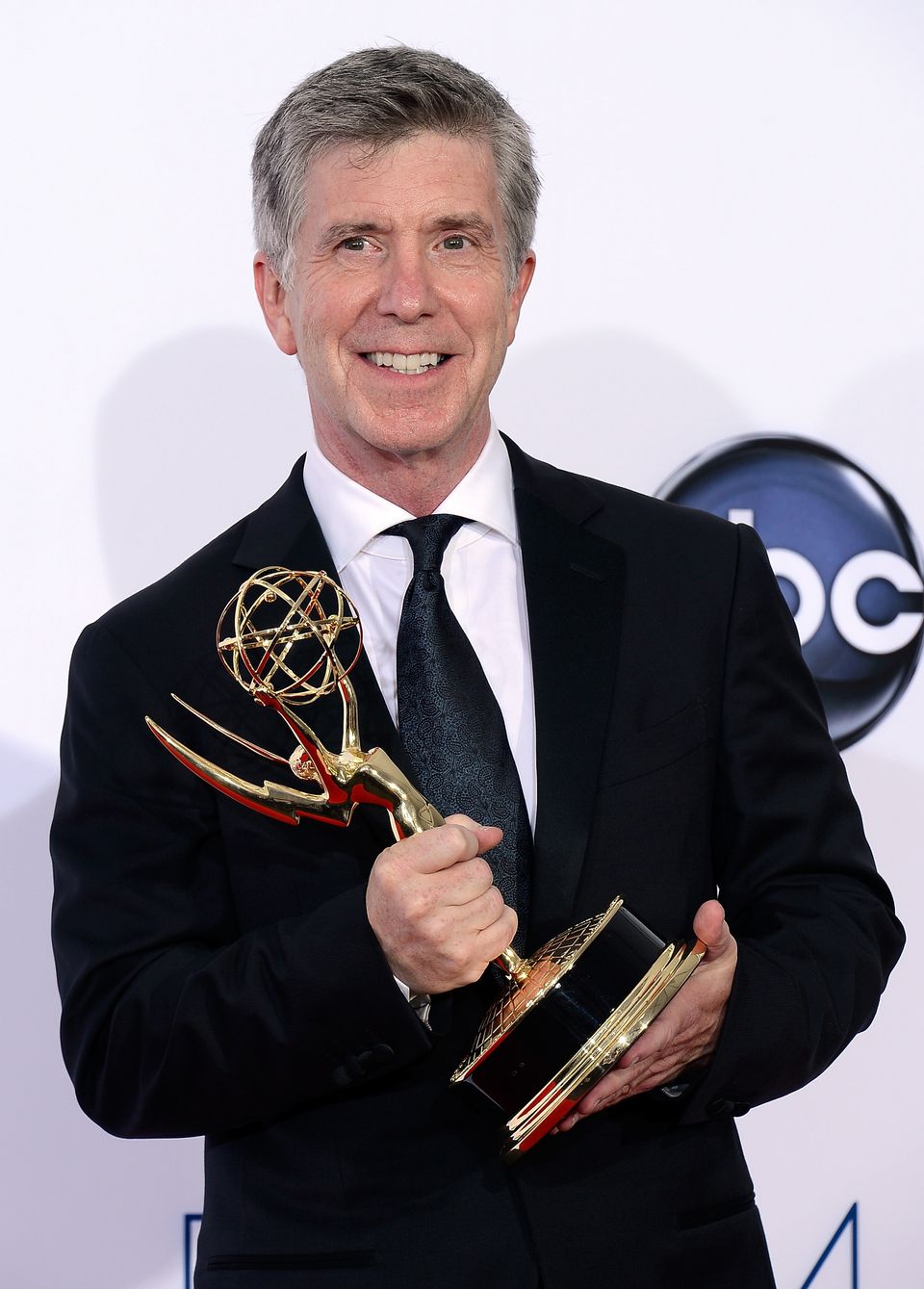