When the last second ticked off the clock at Super Bowl XLVI, there was no denying that Gisele Bundchen's Super Bowl prayers had been left unanswered. After all, her husband's Patriots fell to the Giants. As she made her way down to the New England locker room from her seat, Tom Brady's supermodel wife didn't hold back on her feelings about the final minutes of the game.

As Bundchen walked to the elevator, someone, presumably a Giants fan, could be heard screaming, "Eli owns your husband!" Bundchen didn't respond directly to the fan. But just before she got into the elevator, she let out a curse word while complaining that Brady can't throw the ball and catch it at the same time. She was seemingly referring to any one of several key dropped passes late in the game.

With a little more than four minutes left and New England leading, 17-15, the usually-reliable Wes Welker dropped a key pass that would have put the Patriots in the red zone and in a position to put the game away. After the Giants went on to win, an emotional and clean-shaven Welker blamed himself for the final result, seemingly affirming Gisele's point of view.

"It's a play I never drop. Most critical situation and I let the team down," the distraught Welker said. "It comes to the biggest moment of my life and I don't come up with it. It's discouraging."

Following Brady's postgame press conference, photographers were able to catch some snapshots of the Bundchen consoling her husband before they left Lucas Oil Stadium. 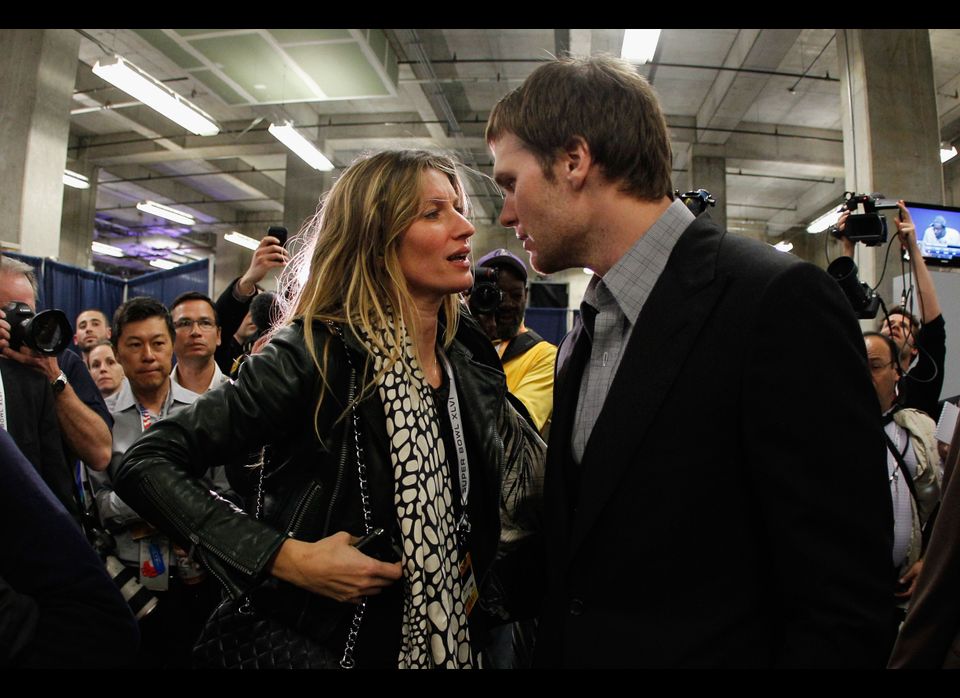 1 / 6
Tom Brady #12 of the New England Patriots chats with his wife Gisele Bundchen after losing to the New York Giants by a score of 21-17 in Super Bowl XLVI at Lucas Oil Stadium on February 5, 2012 in Indianapolis, Indiana.
Getty