No one can say Victor Thompson is not a Tom Brady fan -- not when he has the helmet of the New England Patriots' quarterback tattooed on his head.

Thompson got the elaborate ink job done in 2008, according to Barstool Sports.

Now, his unique tribute to Brady has gone viral, thanks to a mug shot showing four sides of Thompson's "Patria-tat" stemming from an arrest in St. Petersburg, Florida, last month. 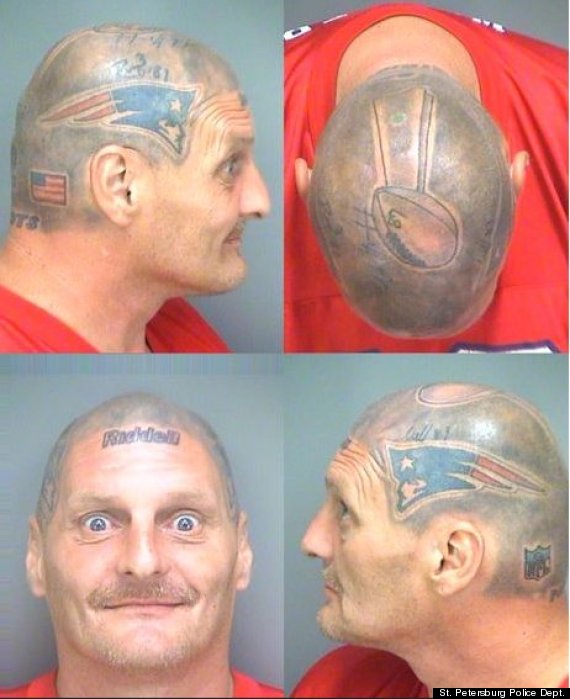 Thompson, 46, was busted Sept. 10 for possession of Spice, the synthetic marijuana, according to The Smoking Gun.

The suspect told police that he purchased the "Master Kush" Spice “from a black male for $15” at a downtown park. He also told the cops he did not know the drug was illegal in Florida, claiming it was still legal in his home state of New Hampshire, from where he had moved just three weeks prior.

New Hampshire actually banned the sale of synthetic marijuana in 2012, according to UnionLeader.com.

Thompson was charged with felony drug possession and trespassing. He is being held at the Pinellas County jail in lieu of $1500 bond, the New York Daily News reports.

The jailers took the extra step of taking four separate booking photos of Thompson so that his tattoos could be memorialized for possible future identification purposes.

The tat includes Brady's number, 12, an American flag and the NFL logo and even a small green dot to indicate a helmet that, if real, would have a headset allowing Brady to hear plays from his coaches.

Thompson's tattoo goes further: There's a recreation of the Vince Lombardi Super Bowl trophy and ink-replicas of the signatures of Wes Welker, Rob Gronkowski and Randy Moss tattooed across the dome, NESN.com reports.

Thompson got the tattoo in January, 2008, after the Patriots finished the regular season undefeated.

“It’s something that popped in my head," he told WMUR TV at the time. "I was watching the game, and I said, ‘I want my head to look like Tom Brady’s helmet.’" 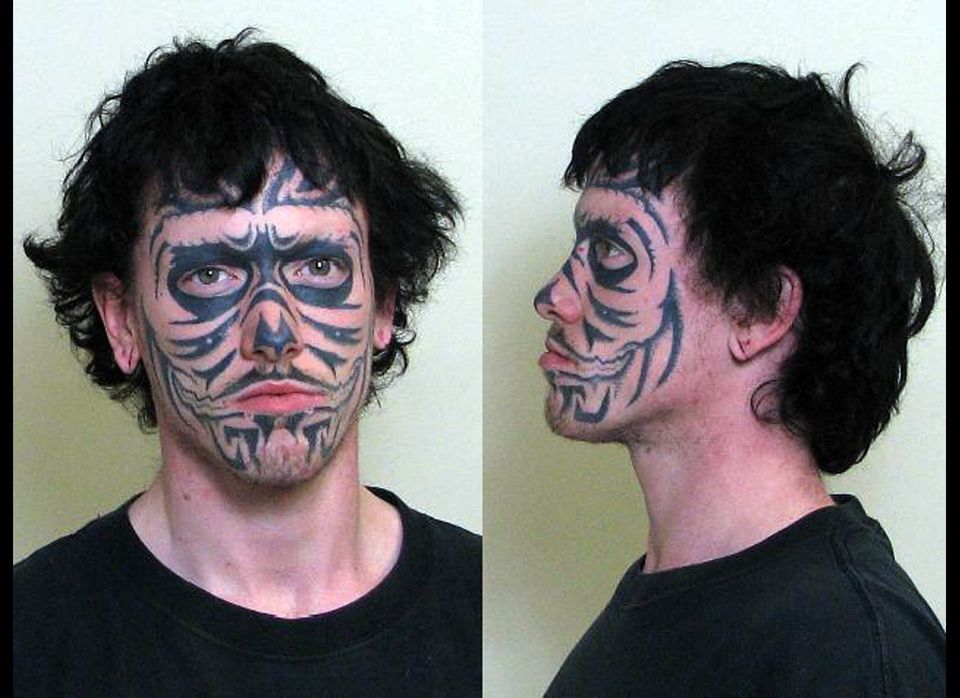 1 / 23
Adam Roberts
This photo combo provided by the Madison County Sheriff's Office in Edwardsville, Ill., shows Adam Roberts. Roberts, 24, was charged Friday, March 8, 2013, with three felony burglary counts related to thefts discovered last month from as many as 28 storage units in his southwestern Illinois hometown of Godfrey. What makes Roberts distinctive is the skeleton-style tattoo over his face
AP