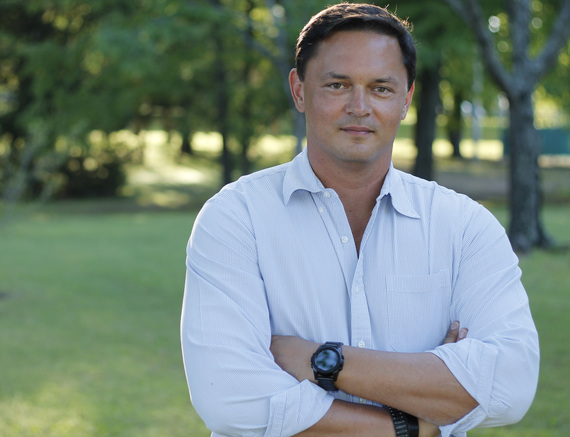 In the book, North Korea's unstable young dictator wants to get his hands on the money needed to acquire a nuclear missile capable of hitting the mainland United States. But first, he must eliminate the man who stands between him and his goal -- President Jack Ryan. He must also deal with the operatives working for the under-the-radar security agency known as The Campus.

You co-authored Tom Clancy's last three novels. Full Force and Effect is the first Jack Ryan novel you've written alone. How did your experience working with Tom Clancy inform this solo effort?
I've read all his books beginning with Patriot Games. That gave me a leg up when we collaborated on the three books. I know what a reader expects to find in a Tom Clancy novel. When we worked together, I never tried to copy his style. From having written with Tom, I certainly know the voices of the different characters. Once I began this novel, I told myself not to do anything differently from when we collaborated, except this time, I would be taking the entire project all the way through. Working with him gave me the confidence to take this project on, and write an aggressive story.

You have degrees in political science and international relations. How did you make the transition to writing thriller fiction?
Those degrees gave me confidence in my ten year career as a waiter and bartender. (Laughter). At first, I didn't do much with them. I worked on a book for fifteen years before finishing it. I was working in the international medical devices field, but always hoped I could become an author. My first book was published in 2009, when I was forty-two years old. It's taken a long time to get to where I am now.

International relations always interested me. I was a huge reader, primarily of non-fiction in the areas of the military and espionage. Patriot Games was the first thriller I ever bought. After reading that novel, I realized you can enjoy yourself while actually learning something. Tom Clancy could impart so much knowledge while telling a great story. That exposure grew into my ultimately becoming an author, myself.

How did your collaboration with Tom Clancy begin?
I'd had my own books published. It turned out my editor at Berkeley was also Tom Clancy's editor at Putnam. Tom was looking for a new co-author. My editor went to my agent who then asked if I would like to co-author the next Tom Clancy book. I wish I could say I was excited, but the truth is, I was terrified. (Laughter). After I caught my breath, I offered to "try out" because there were some other authors also in the running. I wrote twenty-five pages, handed them in and soon thereafter, I was in Baltimore meeting with Tom Clancy.

Your novels have so much information about military technology and up-to-the moment political developments. Does any government agency insist on vetting your books before they are published?
No. I don't think they can do that because I'm a civilian. I've had non-classified briefings at the Pentagon. I've gone to Washington, D.C. to attend symposia and various think tanks. A U.S. citizen can do that. In 2012, Tom and I wrote a book called Threat Vector. One think tank I attended in Washington, D.C. was comprised of admirals who formerly had been in charge of our Pacific fleet. There's an amazing amount of unclassified material available to a writer. Experts with whom I speak often say, 'I'll give you the non-classified' version of what I know.' I turn it into fiction. I hope I get things right, but I have little doubt I get some things wrong. But after all, it's fiction. I often tell these people not to worry about my getting too close to home with this kind of information. I ask them not to underestimate my ability to misunderstand or make mistakes.

Full Force and Effect deals effectively with national security. What do you now see as the greatest threat to U.S. national security?
In my opinion, the greatest threat is Russia's Vladimir Putin. I see him as more of a threat than ISIS. Putin has influence in Syria. The Russians are heavily involved in weapons proliferation in South America, Asia and the Middle East. I know we hear things about China's power, especially relating to cyber warfare, but my research indicates it's really in China's interest to work with us. Vladimir Putin is more of a loose cannon whose self-interest involves working against us for many reasons.

In your novels, the line between corporate and national security intelligence operations can become quite thin. Are they becoming more intertwined today?
Yes, very much so. Dana Priest of the Washington Post wrote a book called Top Secret America in which she detailed people in corporate America who have top-secret security clearances. There are no checks and balances, such as those placed on government groups. While I'm quite laissez faire in my view of things, there can be a danger in that. Full Force and Effect, describes one such malevolent force, a private American security company working secretly with the North Koreans. In Washing, D.C.'s beltway, there are thousands of non-descript buildings staffed by people who have military or intelligence backgrounds. If people in those companies began working against the interests of the U.S., there could be a problem. The bottom line for these companies is money.

What would you do if you weren't a writer?
I tried very hard to get into the Air Force through Officer Candidate School, but it was a time when the military was drawing down. I wanted to get into the cryptologic language end of things because I love foreign languages. I'd have liked to have worked in a military intelligence venue; or in the State Department. I probably would have worked for the government, either in diplomacy or intelligence. I guess a good deal of my writing is wish-fulfillment.

Will you continue the Jack Ryan novels; move back to writing books like your Gray Man series; or do both?
It looks like I'll be doing both. Right now, I'm working on the fifth book in the Gray Man series. I've also agreed to do another Clancy book for next December. For a while, I've been writing two books a year. There's a point in each product cycle where I tell myself I'll never do this again. Right after I turn the book in and I have that high from having completed the job, my editor comes after me for another book. He knows how to play me like a fiddle.

What has surprised you about the writing life?
What's really surprised me is how people want to talk about what they do and know. I was hesitant to interview people when I began writing these books. I'd been a bit reluctant to reach out and ask people for favors. But I've learned that people really love to talk. They aren't even necessarily people who love books. Virtually any person I've contacted, in any walk of life, has been happy to provide a wealth of information. That's really surprised me.

What do you love about the writing life?
Even four or five years before I got my first book deal, it occurred to me that I loved what I was doing -- writing. And it struck me, even back then, how much I loved the one hour before work every morning when I'd go to the coffee shop to write. It was my favorite hour of the day and was what I most looked forward to doing.

The awareness hit me back then: I was approaching middle age and hadn't yet been published. I realized I could be writing for the next fifty years -- not be successful as it's conventionally defined -- and it would still be what I loved doing. Nowadays, I love when I walk my dog, I'm thinking about the book I'm working on. I love the process of my mind getting sucked into the book I'm writing. It's where I want my mind to be. My favorite part of the writing process is the absorption in the creative task.