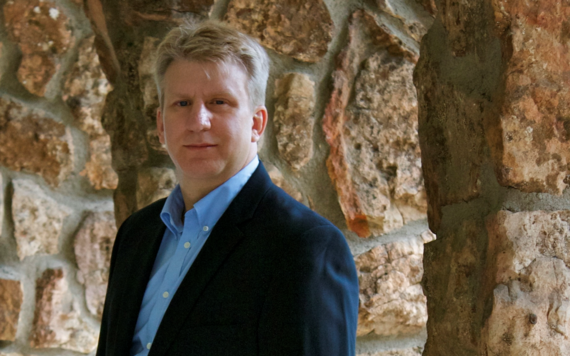 Grant Blackwood co-authored Dead or Alive with Tom Clancy, The Kill Switch with James Rollins, and The Fargo Adventure Series with Clive Cussler. He's also the author of the Briggs Tanner Series, among other novels. A U. S. Navy veteran, Grant spent three years aboard a guided missile frigate as an Operations Specialist and a Pilot Rescue Swimmer.

Under Fire is Grant's first solo Tom Clancy book in the Jack Ryan, Jr. series. Working alone for the first time on assignment for The Campus in Tehran, Jack shares lunch with an old friend, Seth Gregory, during which he's given the key to Seth's apartment, along with a cryptic message. Soon thereafter, Seth goes missing and Jack, doing his best to locate his friend, finds himself entangled in a web of espionage; global politics involving the CIA, Great Britain's MI 6, Russian and Iranian intelligence; and a popular uprising in neighboring Dagestan.

How did you approach writing Under Fire in light of Tom Clancy's untimely death?
The guiding force was to stay true to the Tom Clancy franchise. I'm steeped in the Clancy universe and that informed everything I did in this book. The question I asked myself was: 'Am I doing my best to give Tom Clancy fans what they would get if he were still alive?'

Since Under Fire is your first solo effort in the Tom Clancy franchise, did you feel any pressures or restrictions?
There were no restrictions at all. My editor and the people at Putnam were fantastic. I didn't feel pressure, partially because I'd co-authored Dead or Alive with Tom, which did very well. The only pressure I felt was to come up with something fresh. I knew I would write about Jack Ryan, Jr. on his own, and this would be a very personal story for him. I had to delve into what would drive him; what would challenge him; and what would put him in jeopardy.

You anticipated my next question. In Under Fire, Jack Ryan Jr. must negotiate trouble on his own. How does he evolve in this scenario?
This is the seventh Jack Ryan, Jr. book in the series, so Jack has been through a great deal. In earlier books, he was an analyst, but now, in Under Fire, he's a full-fledged field operative. The reader gets to see his evolution as he now takes on challenges largely by himself.

In Under Fire, Ysabel Kashani is an intriguing love interest. Tell us a little about her and the relationship she and Jack forge.
Early in the book, Jack is in big trouble. She appears at just the right moment. She has a relationship with Seth Gregory, the man Jack is trying to find. For a while, Ysabel's motivation is a bit of a mystery. But slowly and steadily, Jack begins trusting her and she becomes a real partner. Anyone who has read Jack's story in previous books knows forming relationships is a bit of a challenge for him.

I understand when The Hunt for Red October was published, you were involved in anti-submarine warfare. Tell us about that, and your relationship to Tom Clancy's novels.
Even before I started writing, I admired him. I read The Hunt for Red October on board a U.S. Navy warship. I recall the book detailing things I was actually trained to do. It was a bit surreal because right there in a novel, Tom Clancy got a lot of stuff right. It was fascinating to me. When I started writing, Tom was something of a mentor for me. It finally came full circle to be writing books with him and now carrying on his legacy.

In addition to penning your own novels, and working with Tom Clancy, you've collaborated with some of the other bestselling authors in the world. How does collaboration on a novel work?
It depends on the author with whom I'm working. I take my cues from my co-author because part of being a collaborator is being flexible. When we first get together to talk about how to proceed, we work and flesh everything out ahead of time so there are no surprises.

How is writing a Tom Clancy novel different from co-authoring a James Rollins or Clive Cussler novel?
Within the thriller genre there are many sub-genres. The term 'thriller' is something of an umbrella. Tom Clancy wrote political intrigue. James Rollins and Clive Cussler are adventure novelists. So, I have to switch gears a bit with each co-author. In a Clancy novel, I hope to create a scenario in which the reader will say, 'Yup, I just read about that in the newspaper.'

As a co-author, I have to broaden my scope. I must be ready to talk about virtually any subject pertaining to the story.

How and when did you decide to become a writer?
The truth is I wanted to become a writer when I was eight years old. I tried writing an Irwin Allen disaster-style novel. About four pages into it, I realized I had no idea what I was doing. So I went outside and played with doodlebugs. (Laughter). I'd always felt inspired by Tom Clancy and Clive Cussler. About two months after I got out of the Navy in 1987, I sat down at a typewriter and started writing. I've never looked back.

What would you be doing today if you weren't a writer?
That's a hard question, but I think I'd have eventually found myself in some kind of creative field. I don't know what it would be because I can't draw, I can't sing, and I can't dance. But I'll say this: even if I weren't being paid, I would be writing.

What's the most important lesson you've ever learned about writing?
As it pertains to thrillers, it's a lesson I didn't learn from Clive or Tom. Rather, I picked it up along the way. It's this: the reason people pick up thrillers is to be entertained. If, they happen to be enlightened and educated by what the book offers, that's great. But for me, the entertainment value is the tip of the spear. That's the most important lesson I've learned, and it's the guiding principle that gets me through hard times.

Speaking of hard times, how long did it take for you to become a success?
That's a really interesting question because everything is relative. Many authors go into writing knowing how tough this business is. When I teach, I talk about little graduations. When you finish a book, that's a little graduation. When you get an agent, that's another little graduation. I kind of felt I'd made it when I started making a living doing this and doing it full-time. 'Making it' is, I think, doing what you love for a living.

You're hosting a dinner party and can invite any five people, dead or alive, from any walk of life. Who are they?
I would love to have Abe Lincoln over for dinner. It would be great to plumb his mind. Secondly, I wouldn't mind having Jerry Seinfeld there. He's so clever and I just loved his show. And because they were so important in my life, I'd want to have Clive Cussler and Tom Clancy, too. I'd love to have my wife there so she could enjoy the company. And I'd definitely want at least one of my four dogs there, as well. (Laughter).