Tom Cruise became a veritable film superstar by the end of the end of the 1980s. In this first look at his new film, we get a glimpse of what he may have been had he chosen music over acting.

Cruise's team tweeted an image of the star as Stacee Jaxx, the 80s rockstar lead of the big screen adaptation of the Broadway show, "Rock of Ages." Cruise plays the womanizing hair metal star, complete with an impressive physique and era-accurate tattoos.

He's joined in the film by a star studded cast put together by director Adam Shankman. Malin Ackerman recently joined as a naive journalist who falls for Jaxx, finishing up a cast that owns the A-list. Russell Brand will take on the role of a venue owner and sing an REO Speedwagon song with Alec Baldwin, who will play Dennis Dupree, a washed up musician and club owner. Julianne Hough is the young, naive singer new to LA, while Bryan Cranston will play the mayor of the city; Catherine Zeta-Jones plays a conservative out to destroy rock; and Mary J. Blige will also be in the film.

Cruise has been working hard at his singing, Shankman said, to give the movie as authentic a feel as possible.

"It wasn't until our first go around with his voice lesson that we sort of looked at each other and went, 'This is gonna work!'" he told Entertainment Weekly. "And we were basically dancing around the living room and high-fiving each other because he actually has a fantastic voice. His grandfather or his great-grandfather was an opera singer, so apparently he's genetically predisposed for this sort of thing."

Baldwin has been tweeting from the set of the film, writing, "There are some things that are happening on this movie that are going to BLOW... YOU...AWAY," and "I was off work today and went to watch TC shoot. He killed it. I mean, it was beyond great." 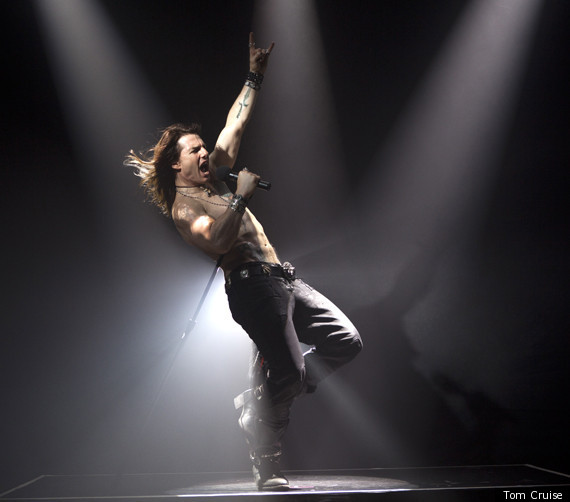