French Vogue editor-in-chief approached Ford about the gig over a year ago. She told WWD, "I always say, 'Tom has an eye like a scanner.' He took his role very seriously. He is truly multitalented."

So what's inside the special issue of the glossy? According to WWD, a fashion story about his muses, including Lauren Hutton, a spread on Ford's New Mexico ranch by Terry Richardson, family photos and contributions by Ford's partner Richard Buckley.

The issue hits newsstands November 30, but in the meantime, here's a small version of the cover image featuring 15-year-old Daphne Groeneveld with Ford in the corner. 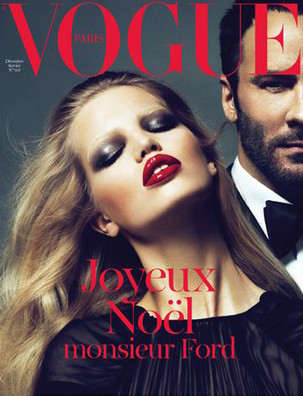