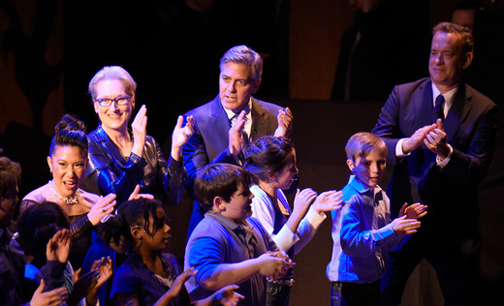 "This is the best show in town tonight," exclaimed David Letterman at the SeriousFun gala, the only thing he said that wasn't a joke. Founded by Paul Newman and Joanne Woodward, SeriousFun was established to ensure childhood fun at summer camp for children with special needs. With Paul Shaffer at piano, Letterman did his Top Ten, featuring songs for Newman's movies: only Shaffer could set "Towering Inferno" to the tune of West Side Story's "Maria,"or "Cat on a Hot Tin Roof" to "Mack the Knife," but you get the picture. A mix of Newman nostalgia, performances by many campers, and high profile celebrities like Clooney, Streep and Hanks, SeriousFun was the place to be.

The handsomest heartthrob of his day, Newman was the standard, for good looks, great acting and philanthropy. Letterman could not keep himself from saying that he saw Clooney backstage, and he's not that good looking. Danny DeVito also compared himself to Newman for a big laugh. Surrounded by a chorus of kids in bowler hats, DeVito's rendition of "Raindrops are Falling (on my Head)" also featuring 16-year old Gavyn Bailey, was an exuberant tribute. Paul Newman would have been 90 on January 26, as Meryl Streep pointed out; he would have avoided most celebrations. But with star power from all the kids he helped, he would have loved this gala.

Highlights included Carole King and Aloe Blacc killing it with "You've Got a Friend." Legendary music producer Lou Adler put them together. Aloe Blacc had never worked with Carole King before and had to ask her to rehearse. It was singing with one of his idols, he said, and he wanted to rise to the occasion. She was grooving, the chemistry was thrilling to see, and hear. Natalie Cole, so elegant, sang "This Will Be." And opera great Renee Fleming performed an aria from Puccini. Newman's people linger in the mind: Tim Rose, honoree at last year's gala, was back, all the way from Seattle, where he founded Camp Korey, named for his son who died of cancer at 16. Cassidy Reynolds, one of his campers attended with her mom. A big fan of Jimmy Fallon, Cassidy at 12 is well on her way to becoming the inspirational speaker of her dreams.