Tom McGrath grew up with 10 siblings on a poor farm in Northern Ireland. Food and clothing were often scarce. McGrath played outside and went to school barefoot. Now, he plans to bring thousands of shoes to kids with disabilities, so they can play with protected soles.

At 64 years old, McGrath has run more than 200,000 miles in races around the world to raise money for various charities. On Sept. 29, he will begin the first of six consecutive marathons -- in six days -- across New York's five boroughs to raise money to purchase shoes for Achilles Kids, a national group that provides support for children and adults with disabilities, many of whom own only one pair of shoes.

McGrath, aka the Running Man, completed the same six-day feat last year, bringing 4,500 shoes to the group. It was such an inspiring experience that he decided to repeat the six charity runs again. This time, however, he hopes to raise enough money to buy shoes for all the kids in the program -- roughly 7,000. So far, McGrath has raised just over $58,000 of the $100,000 goal on his Indiegogo campaign. 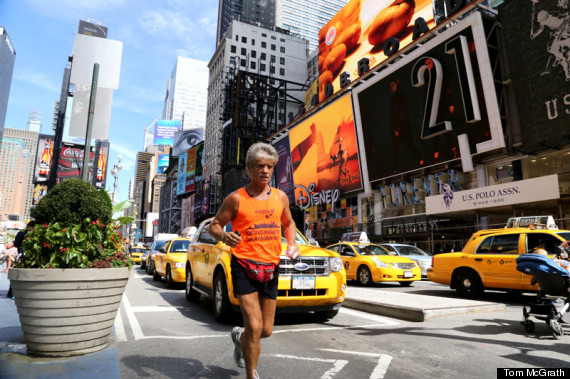 "As long as God gives me the strength and willpower to run, I will do it. I’ve got a gift at running and I want to share it with those that can’t run," he added.

McGrath's been running marathons since he moved to New York from Ireland in 1973. Some might be surprised by his physical prowess and stamina, considering his age, but the serial marathoner says he owes it to his upbringing and persistent training throughout the years. He trains three to five hours every day and maintains a healthy diet.

Surprisingly, he says he's never gotten a blister from one of his many runs. He credits his upbringing for the toughness of his feet.

"Instead of watching television we played sports," McGrath said. "I went to school in my bare feet. During the summer we couldn’t afford shoes. It made my feet tough."

To train for the upcoming marathons, McGrath has been strength training and going on four-hour runs throughout New York City. When his legs tire and his mind wanders, he tries to focus on what keeps his feet moving, one in front of the other.

"There’s a lot of willpower, determination and discipline involved in this type of running," McGrath told HuffPost. "After spending hours on the road your legs get heavy, your mind gets weak and at this time you think why you are doing that and for whom."

"We gotta get the shoes, these shoes mean so much to the kids," he said. "They’re my inspiration."