Tom Petty's a great rock artist, one of the best in history. But for those Christian fans of his, he's become quite the heartbreaker. Is his argument that religion leads to war on target, or does he miss the mark?

In an interview about his new album "Hypnotic Eye," Petty was asked about a bonus track song: "Playing Dumb." Evidently it dealt with the Catholic Church covering up the sexual abuse scandal.

In elaborating on his disdain for the hush money paid out, Petty went on to take a shot at all religion, and its perceived connection to conflict, according to Chris Willman with Yahoo Music.

"Petty also arches his eyebrow toward not just the Catholic Church but religion in general in the article, saying, 'Religion seems to me to be at the base of all wars... I've nothing against defending yourself, but I don't think, spiritually speaking, that there's any conception of God that should be telling you to be violent. It seems to me that no one's got Christ more wrong than the Christians.'"

Petty is hardly the only one to claim that religion is connected to conflict. Dr. John Kelsay, a professor of comparative religious ethics, and author of several books about religion and war, writes

"What will be the story of religion and war for the next quarter century? From all indications, it will be less the story of enhanced diplomatic initiatives-fostered by the ever-growing interconnections in economy, information technology, and environmental awareness-and more the story of increasingly bloody conflict, fostered by a resurgence of group identities. In such conflict, religion will serve less as a force for peace, more as one of several factors establishing differences between groups, and legitimating their irreconcilable claims. Considering the emphasis of writers at the beginning of the 20th century, it's an ironic commentary-but at century's end, we should prepare to see religion less in the service of peace; more in the service of a particularly bloody kind of war."

To test that argument about the connection, my students and I looked into the subject. To determine if a war is religious or not, we looked at the issues of conflict data collected by Kalevi J. Holsti in his book Peace and War: Armed Conflict and International Order, 1648-1989, by the Cambridge Studies in International Relations.

In each century of analysis, our research found that religion was very infrequently a source of conflict. Never once did we see it factor in more than six conflicts. Three other issues of conflict (regimes, real estate and riches) were far more likely to act as a reason to fight. 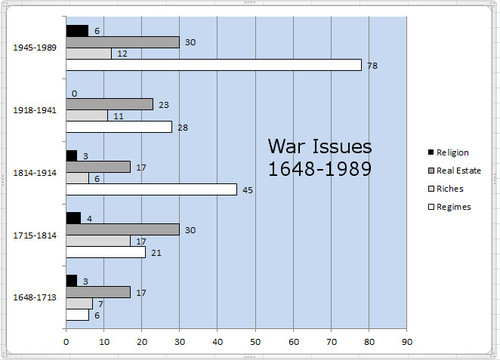 Religion and Issues of Conflict

There are several reasons for why we think religion is linked to conflict. First, if a war does have a religious component (however infrequently), it gets a lot more attention from the media. Second, a lot of wars we think are religious aren't. When Protestants and Catholics fight in North Ireland, they aren't fighting over details about the Eucharist or Virgin Birth, according to Time magazine columnist Lance Morrow. The issue is about political power and representation in the government, even jobs and real estate. If anything, religious leaders are often the ones working to stop the conflict, rather than start it.

Petty is right; countries have gone to war over religion. But it's a fairly rare event over the last four centuries. It's certainly not "at the base of all wars," as Petty claims.