Originally published by The BRAD BLOG...

President Obama recently nominated Tom Wheeler as the new Chair of the Federal Communications Commission (FCC), the federal agency tasked with protecting the public interest in broadcasting, particularly over our public airwaves.

One of the first questions Wheeler's FCC will have to (reluctantly?) decide: Is talk radio the same as "bonafide news"? 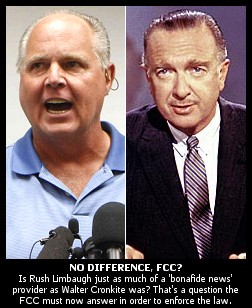 More than three-quarters of the American public say no, according to Pew Research, and one would think an agency sworn to protect the public interest and its airwaves would agree with that vast majority. But will Wheeler choose to put the public interest first, or will his FCC continue to simply turn a blind eye, as the agency has done since the Reagan administration?

After what we documented last year in Wisconsin, and after official complaints were filed in turn with the FCC about how corporate radio stations there appear to have abused their licensed privilege to broadcast over our public airwaves, that question may finally have to be answered by the federal agency tasked with enforcing the law over those very airwaves.

This "bonafide news" question has its roots in an urgent complaint filed at the FCC in the middle of the 2012 Scott Walker gubernatorial recall campaign in Wisconsin. Two huge local AM radio stations (WISN and WTMJ) were actively promoting candidate Walker on their local talk radio programs for about 160 minutes a day, every day, even using our publicly-owned airwaves to recruit volunteers for the Walker campaign. But neither station would allow a single supporter of the other candidate (Democrat Tom Barrett) on their shows.

Such selective private censorship over our public airwaves violates not only the First Amendment -- by denying certain individuals free speech -- but also the "Zapple Doctrine," a little known FCC rule (also called the quasi-equal opportunities rule) that requires stations to provide comparable time for supporters of both political parties when it is requested.

With assistance from the Media Action Center (MAC), Wisconsin citizens filed a complaint on May 24, 2012, expecting to have the matter resolved before the 2012 general election. But nothing happened.

MAC next filed a legal petition to deny the operating license of WTMJ. That finally forced WTMJ attorneys to respond, and respond they did, with a Hail Mary maneuver, asserting, among other things, that their talk radio shows (which use the airwaves with biased political intent, including the use of racist comments) are actually "bonafide news."

Historically, lawmakers understood the need for a firewall between political rhetoric and real news reporting, because the "bonafide news" exemption was ensconced in the 1934 Communications Act. ("Bonafide news" programs get the exemption so they can report on candidates' events as they occur.) It remains the law to this day, and WTMJ, despite the content they actually provide over our airwaves, is now attempting to exploit that provision for all that it's worth. And, if they are able to continue to do so -- it is worth plenty.

However, just because that restriction is built into the law does not mean the FCC will necessarily either enforce or obey it. (For example, on issues of the lack of women and minorities having access to radio licenses, and of allowing radio and TV stations and newspapers in the same town to have the same owner, as we reported back in 2011, the Third Circuit Court of Appeals has twice remanded the FCC to listen to the public and act in the public interest. The FCC pretends to listen, then moves ahead with its industry-friendly agenda anyway, which puts them back into the courts to be remanded yet again.)

So perhaps it is no surprise that one year -- and six elections -- after the initial Wisconsin complaint, the FCC has still failed to act. (In fact, the agency initially denied receiving both the MAC complaint and the petition to deny, until the Media Action Center very publicly sent them proof of delivery.)

Enough. "We the People" are tired of waiting patiently for the FCC to do its job. The people of Wisconsin cannot afford to go through yet another campaign season with giant radio stations illegally promoting one political party over another (and Wisconsin is not alone in this bullying broadcast behavior.)

And on the issue of "bonafide news," if the FCC does what it normally does -- that is, cave in to industry desires -- we can say goodbye to any firewall between true journalism and propaganda over our public airwaves. The blurring between fact and opinion will go unabated, and Rush Limbaugh will be featured in journalism textbooks alongside Walter Cronkite.

The good news is that three-quarters of us do understand the difference between opinions and news, so we have time to turn back the tide.

It starts with this petition. Please sign it and share it with others: Tell the FCC: Talk Radio is NOT Bonafide News.

We'll deliver the petition with everyone's signatures to FCC Chair Wheeler upon his expected Senate confirmation. We will see what he does, and we will act accordingly.