When I was a kid I was convinced I could save the world. The funny part about that is not necessarily the naivety of me thinking I could save the world, it is the fact that I had no idea what the world needed saving from. When I was five years old I loved everything about everyone. I went to kindergarten and adored my teacher. Her name was Ms. Langer and she wore lavender skirt suits with lavender pumps to match. She was every five year old girl's idol. She was quite literally mine.

My days were filled with school bus rides, finger painting, nap time and music. They were full of laughter, playtime, and a complete feeling of being surrounded by a giant bubble of love and security...only I didn't know that then. There was this boy in my kindergarten class named Wally. He was different from the rest of us. The year was 1981. Wally acted out often in class. He talked back to the teacher. He cried. He screamed and for some reason the teacher always sat him right next to me. The first day that my idol of a teacher sat him next to me I was upset. I thought that she was doing it as some type of punishment. I thought I must have done something wrong to deserve sitting next to the worst kid in the entire kindergarten class. When it came time for snack and milk Wally smiled at me and then proceeded to spit an entire mouth full of milk directly in my face. He was promptly sent to the principal and I was quickly ushered over to the sink to wash my face. When my father greeted me at the bus that day and asked how my day was I quickly responded with,
"Not good. Wally spit milk at me."

My father looked at me and said, "Oh is that right? He spit milk at you?"

"Yes. He spit an entire mouth full of chocolate milk at me daddy."

"Well it sounds like Wally was having a bad day.

I bet tomorrow will be better."

The next day at snack time Wally looked at me and sure enough he spit milk at me yet again. He was sent to the principal and I was walked to the sink to wash my face...again.

"How was school honey?"

"Not good. Wally spit milk at me AGAIN."

"Did you ask him why he spit milk at you?"

"No. He went to the principal before I could ask him. Spitting milk is gross."

"Of course it is honey, but maybe Wally is sad about something."

"Maybe Wally just needs a friend. Maybe he just needs someone to smile at him."

The next day I went into school and I sat down at my desk. I looked at Wally and I said hello. He looked back like a deer in headlights and he said hello back. We wound up becoming "chore buddies" for the remainder of the year. We fed the hamster together. We handed out milk together. We barely spoke, but we said hello every morning and goodbye every afternoon. He never spit milk at me again. At the start of first grade my teacher sat Wally next to me and I asked him how his summer was. He smiled and said it was okay. My family and I moved at the end of that year and I have no idea what happened to Wally after that. I worried for the first half of second grade about who Wally was sitting next to and I hoped that they were being nice to him. I hoped that he was able to find someone to be his friendly smile throughout his day.

The remainder of my elementary school days were happy and middle school appeared faster than I could have imagined. Once I got into high school I became obsessed with saving the world. That's right. The world. I was super realistic. Homeless? I was going to feed and shelter every one of them. Sick? I was going to fund their treatments and find their cures. Equality? Is that even an issue? Everyone is the same no? Everyone is the same? Apparently not. To me though the answer was simple, the answer was yes. We are all human beings and we are all the same.

I had many an argument at the kitchen table with my father about all of it. If it had been up to me my parents would have been running a shelter out of their kitchen. We would have been handing out money to those who needed it and not questioning them on their way out the door. As I spewed my ideas of saving the world, my father explained to me how the real world just didn't work that way. The very man who had told me to go ask the milk spewing kid how his day was going told me I just didn't get it. He was right. I didn't get it. The world was much more complicated than I realized at the time. Don't get me wrong it wasn't that my father didn't want to raise me to be someone who wanted to save the world and help people, it was that he wanted me to understand not everything is that simple. He wanted me to realize I was setting myself up for giant disappointment. He wanted me to realize not every person needing help was a milk spitting five year old.

My father is a man who drops everything to help anyone. In 1986 the towns around us were hit by a major flood. My father dropped everything to help those families by working on their homes in his spare time. He was the guy who would stay two hours late at work because one of his employees needed someone to talk to about the sudden death of their mother. He was saving the world in his own way while trying to prevent me from giving too much of myself and getting nothing in return.

The other morning I turned on the news and I stood in my kitchen and cried. I cried because I feel helpless. I cried because I want it all to stop. I cried because I thought about my five year old self and how I just wanted everyone to be OK. I just wanted everyone to be happy. I thought about the fact that I now have an eight year old and a five year old and how all they want is for everyone to be included. They are good kids who feel sad when someone else is sad. They feel joy when someone else feels joy. They feel and I never want them to lose that. I never want them to lose the ability to feel empathy. As far as I'm concerned empathy is not an optional human emotion. It is a vital human emotion.

We have become a society with our faces buried in our phones. Our emotions are expressed through our Facebook status or a quick Twitter update. Our Instagram shows our life in pictures and our Snap Chat tells our friends how we feel about them. How can we raise a generation of empathetic, emotional, human beings when we have taken away all the tools they need to be those people? You see the only tools you need to be an empathetic human being are your heart, your brain and your ability to feel things.

You see somewhere deep down the five year old in me wants to pull my chair up to the milk spitting kid and just smile. I want to ask him how is day is going. I want to tell him he is not being judged. I want to tell him I will be his friend. I want it to be that simple. I want it all to be that simple. Despite the fact that my father warned me that simplicity was something adults were not blessed with I wanted to believe otherwise. I wanted to believe that life was simpler than adults made it out to be. As far as I can see we complicate everything. We make it harder than it needs to be. We are doing it all wrong.

I am a mother. I am of the belief that I am supposed to be teaching my children to become empathetic, loving adults and in doing so I realize that they are in fact teaching me. Children are our reflection. They do as they see. The thing is everything is a mess right now. It's a big old mess. Stop sharing someone else's opinion. Just stop. Instead find a way to reach out to an actual human being. I can't even begin to imagine what it feels like to be a police officer in our country right now or to be married to or the mother of or the child of an officer for that matter. I also have no idea what it feels like to be black in our country. I have no clue and for me to spew opinions as if I do, would just be ignorant. So here is what I will say. I stand with you. I stand with all of you because it is not my job to judge. It is not my place to argue or shout words that will not make any of this better. All I can offer is empathy and love.

All I can hope is that at some point we will all find a way to make this better not just for us but for the generation to follow. I can only hope that we all want to create the best reflection for them to emulate. We can do this. We can be better. We can find better words. We can be kind. We can and if you find yourself saying you can't then YOU are the problem. We can find a way to wipe the spit milk off of our stubborn faces. We can find a way to look at the kid spitting the milk. We can look him in the eyes and we tell him we see him. We can tell him we really see him and we can change more than we realize. 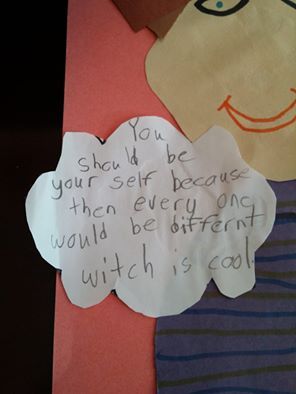 Voting Made Easy
Register to vote and apply for an absentee ballot today
Register now
More:
kindnessParentsLoveraising childrenempathy
Newsletter Sign Up
Raise the kind of person you'd like to know
Subscribe to our parenting newsletter.
Successfully Subscribed!
Realness delivered to your inbox