The following letter is addressed to Mayor Betsy Hodges, as well as all White people within the Minneapolis Metro-area. To provide context for readers who do not live within the city, or are under familiar with the present day disparities between White Minneapolis residents and their POC counterparts: On November 15, 24-year-old Jamar Clark, a Black resident of North Minneapolis, was killed by police from the 4th Precinct. The killing provoked an occupation, and subsequent actions, which continue to this day. This includes the shooting of protesters by a group of White Supremacists at the 4th Precinct on the night of November 23rd.

That said, the death of Clark should be seen as one singular event within a broad narrative unfolding within Minneapolis. While much maligned, the 4th Precinct is hardly alone in its role as antagonist within the city. On the South-side of Minneapolis, the 3rd Precinct is equally as notorious; having prostitution cases thrown out of court because officers went so far as to reach orgasm on multiple occasions, while on wiretap, as well as having emergency room doctors perform cavity searches against the vocal opposition of the physicians present. Along with systemic issues with the city's police force, Minneapolis was recently voted the 3rd worst place for African-American's to live in the entire United States. 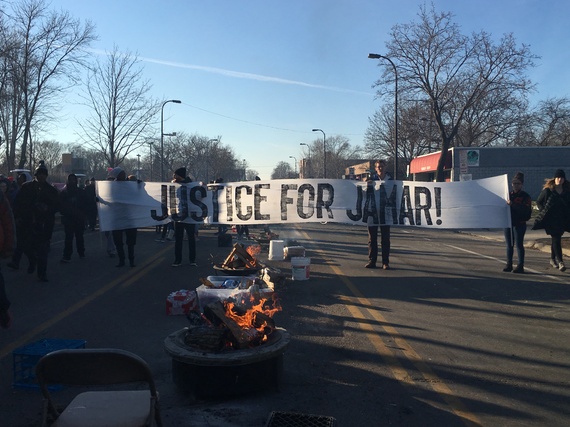 In the midst of being attacked by the MPD on Wednesday night at the 4th Precinct, a group of friends and I made the autonomous decision to pay you a visit. This wasn't a sanctioned "Black Lives Matter" action. While it is true that many of us who went to your home have been down at the station house, on and off, from day one, I, at least, would not call myself an activist. We arrived at your house as fellow neighbors in a moment of crisis. We needed you to act. And we wanted you to see us as who we are.

You weren't home when we arrived, but when we spoke at your office the following morning you asked us what we wanted you to walk away with. We said we wanted the attacks to stop. As the days have passed, and the anxiety of time in crisis has buoyed us high and low, I've changed my mind. Our answer, while justifiable considering the circumstance, was dangerously short-sighted. Even now, with the disgusting events of Monday night in hindsight, our problem isn't the gun in our face, or even the invectives and thinly veiled racism of Police Federation head Lt. Bob Kroll. Our problem is what passes as normal, here in Minneapolis, both in and out of moments of crisis. This version of normal is as violent as the White Supremacists who shot into the crowd Monday night at the police station on Plymouth Ave.

As a feminist you know very well that the personal is political. And as a feminist, you know that politics starts at home. The city is our home. And our family is under attack from another family member.

In writing this, yes, I am addressing you, but I'm also addressing all the other white folks in the Metro-area who have been calling for "the process" to take its course. The process is the engine that fuels the "normal" way of doing things. I'd argue the point to my grave that what occurred Monday night at the 4th Precinct - four, armed and masked, white men opening fire into a crowd of Minneapolis neighbors determinedly calling out for justice - is a measure of, and not an exception to, "the process" of which you, Chief Harteau, and so many other Metro-area elected officials and fellow neighbors speak of.

The process opened fire on us Monday night. The process allowed us to bleed in the street, as the police laughed, telling us to 'call 911,' followed by, 'this is what you all wanted, right?' The process allows young Black, Brown, and Native neighbors to be called in front of an indifferent court across the street from your office everyday for crimes that would never go to trial if you were white in Minneapolis. The process allows 35% of our Black neighbors to live in poverty while we smile and nod reading articles about how Minneapolis is a "miracle city" in a moment of economic turbulence. And devastatingly, the process leaves a young Black man, who had been so viciously assaulted by the police just months earlier that he experienced a seizure during the attack, to be murdered by the same police just a short time later. The process is a killer, whether fast or slow.

You see, what you feel the process may be, is quite different from what a great many Black, Brown, Native, and struggling white neighbors in Minneapolis know it to be. The process is a social landscape poisoned by abuse.

Again, our city is our home, and all domestic abuse relationships have ups and downs. Moments of calm and moments of what, inaccurately, is considered the event of abuse itself. But abuse is not limited to moments of crisis alone. So let's make this clear, being shot in the face with "marking agents" on Wednesday evening, having police mace those at the Precinct Monday night as they struggled to attend to those who were shot by terrorists; this is not the abuse. These incidents are not the problem at hand. They are the symptom of the poisoned social landscape we so desperately need to remediate. They are the actions of an abuser and not simply the abuse itself.

Individual rhetoric and singular action form policy and the norms of the institutions we build. This metaphor of abuse is not simply a rhetorical tool but an accurate assessment of our lives lived together here and now. In abusive relationships the abused will go out of their way to make excuses for the abuser. We will blame ourselves. We will look to why we began the relationship in the first place. We will feel trapped, thinking to ourselves, "I know I can't stay, but I can't leave either." The abused just wants the attacks to stop, the intimidation, the belittlement, the aggression. A quiet, numbing fear, justified as infinitely better than a full on assault of our bodies and our psyches.

Betsy, you have to stop equivocating. Playing both sides is a deadly attempt at trying to keep the house in order. There's a killer at home. The attacks will not stop because the attacks are beside the point. This isn't an event. What we are experiencing together - whether living off Plymouth Ave. or temporarily working in City Hall - is not going to end unless we take action together. It's not going to get any better on its own. It never does. Not unless we strike at the root. There is an army of neighbors with shovels in hand ready to dig deep. They marched throughout the streets tonight in defiance of fear and hatred. The angel of history rarely flies so low. For our Minneapolis, tomorrow is the question!!!