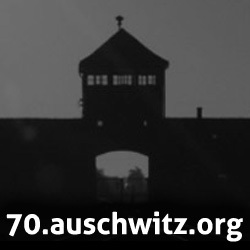 We are all painfully aware of how the unrelenting and inexorable process of aging is taking from us hundreds of members of that Greatest Generation each and every day. The latest sad statistic provided by the Veterans Administration is that our World War II veterans are dying at a rate of approximately 492 a day. According to the same organization, 855,070 World War II veterans are still with us today, out of more than 16 million Americans who served in that war.

Tomorrow, January 27, 2015, on the 70th anniversary of the liberation of the German Nazi concentration and extermination camp Auschwitz-Birkenau, another tragic trend will be noted: The rapidly dwindling number of survivors of the Shoah who are still alive.

Vanessa Gera at the Associated Press observes that, a decade ago, on the 60th anniversary of the camp's liberation, 1,500 Holocaust survivors traveled to Auschwitz to mark that occasion. But, she says, "On Tuesday, for the 70th anniversary, organizers are expecting 300, the youngest in their 70s."

Ronald Lauder, billionaire philanthropist and president of the World Jewish Congress, says, according to the Washington Post, "This is the last big one for many of the survivors. By the time we reach the 75th anniversary, there may be almost no survivors left. But they are coming now, because they want to bear witness, to stand there and say, 'we outlasted Hitler. We made it.'"

But are there any accurate figures as to how many Holocaust survivors have "outlasted Hitler"?

The Washington Post estimates that, "of the number of Jews who were in camps and ghettos, or hiding under Nazi occupation, an estimated 100,555 are still alive."

The United States Holocaust Memorial Museum says that estimates of the number of remaining survivors vary greatly, depending "in part on how one defines a survivor," and adds:

The Museum honors as survivors any persons, Jewish or non-Jewish, who were displaced, persecuted, or discriminated against due to the racial, religious, ethnic, and political policies of the Nazis and their allies between 1933 and 1945. In addition to former inmates of concentration camps, ghettos, and prisons, this definition includes, among others, people who were refugees or were in hiding.

The Museum's Registry of Holocaust Survivors currently contains the names of over 195,000 survivors and family members and "we are adding more every day," the Museum says. But it also adds, "A growing number of these individuals, who registered their names and historical information over the last 15 years, are now deceased."

The Registry is a voluntary and testimonial list, and is by no means a comprehensive list of all survivors. Furthermore, most of the survivors in our database live in the United States or Canada, although we have registrations from survivors and family members from 59 countries.

Regardless of the exact numbers, all of the survivors and the more than 1.1 million human beings who were murdered by the Nazis at Auschwitz-Birkenau will be remembered tomorrow in ceremonies at the former site of the death camp.

"The last of the Survivors who are still alive will be with us on that day. For many of them this seventieth anniversary will be the culmination of their personal victory over despair and oblivion. We would like to spend that day with them," says 70.auschwitz.org, the organization that is sponsoring the ceremonies at Auschwitz-Birkenau. "The memory of the whole world will focus on the tragedy of the Shoah and the cruel system of terror created by Germans in occupied Europe," it adds.

Many are concerned that the relentless decline in the number of Holocaust survivors -- "as the world moves inevitably closer to a post-survivor era" --may lead to people starting to forget what should never be forgotten.

Some even worry that "the anti-Semitic hatred and violence that are on the rise, particularly in Europe, could partly be linked to fading memories of the Holocaust."

Let us hope that even after the last survivor's voice is gone, the world will still be listening to the voices of Auschwitz-Birkenau, and of Sobibór, and of Bergen-Belsen, Dachau, Buchenwald, Treblinka, Belzec, and the voices of Louis de Wind and of the other 6 million Jews on whose behalf we keep proclaiming, "Never again."

I visited the Auschwitz concentration camp many years ago and, as I said then, I for one will never forget the mountain of shoes in one room, the mountain of eyeglasses in another, the mountain of prostheses, the crumbling chimneys of the crematorium, the now-rusting yet still-sinister railroad tracks....

Please watch "The world will be listening to the voices of Auschwitz" below. It is only 32 seconds long, yet it conveys an eternity of grief.