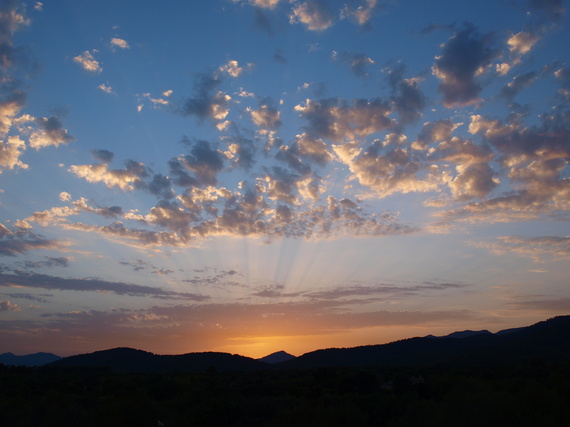 Having recently spent time with a house full of older teenage girls I observe with interest and some trepidation this new generation. I smile with joy when they grab a book and immerse themselves in it, frown when a line of heads glows by the light of mobile phones all night long, relish their deft hands and inquisitive minds embracing fresh vegetables from the garden, worry about their sharp judgement of others based on Facebook artifice, and generally listen to their pronouncements and peep at their mannerisms. The way they dress, laugh and interact is not that far removed from my own teenage years - they all have their own distinct personalities with an understandable dose of egocentricity, and some are better versed in social communication with adults than others.

On the whole they are strong (albeit angst tinged) young women who have grown up with empowered female role models while happily accepting, it seems non-deferentially, those gender differences between them and the men in their lives. Differing religious and non-religious beliefs, sexual preferences, and complex ethnicity are as normal to them as breakfast cereal, and I day-dream about how wonderful it will be when they reach an age of careers and families, free from those toe-curling moments of prejudice still afflicting some of my own contemporaries.

But what emerges as a distant rumbling is the nature and tone of their friendships, altogether different from my day when an intensive ebb and flow of affection was rarely impinged upon by rivalry. Yes, competitiveness naturally existed but it skulked along the periphery while being generally absent between friends at this age. I always dreaded the idea of attending a ballet school, as a family friend did, not because of the physical training but because of the mental and emotional rigour needed to combat the in-built competitiveness at such a young age. That for all the shared sympathies about bleeding feet and blisters, gruelling hours and emaciation, their friendship could never be more than a game of postulation to guarantee success at the next step of their careers. For the rest of us, however, even doing the same A Level subject allowed for a non-rivalrous friendship while career choices and general life direction tootled along a path of Quixotic vagueness.

Yet looking at young women still in high school today, the singularity of drive and ambition, and the relentless discipline needed to keep these traits motored and gunned seems to have blunted the innocence of friendship, or worse still, the selflessness of it. The competitiveness no longer lies in situations that arise from wanting the same job, dance in the same ballet company, or play in the same orchestra; in a way opportunity is more extensive than ever before and we welcome this in a recession full of future uncertainty.

This new competitiveness, however, lies in a more universal goal - for existence on this planet - for a greater positioning to be able to benefit from its physical energy and resources. In a truly global market, what was once the competition for the job within the city of our aspiration is now one for existence within an entire world. Among the bonhomie, laughs and shared experiences lies a hard-edged and lone drive to carve out a piece of the planet for oneself, because occupying it is more difficult than getting a job.

The evolved self in these girls is torpedo--precisioned and visceral. In an overcrowded environment that picks off frailty, the self emanates a strength of purpose and individual presence that outweigh the traditional rewards of old. A piece of the action now means a share of the world's energy. It makes young women grow up fast and survival-savvy, more Renaissance and less 21st century with its sexualisation through obnoxious rappers. Faith in themselves, a kind of "self-faith" is healthily prevalent. Though perhaps disconcerting, it is a natural evolution of the mind and the empowerment of the female adapting to ever-changing circumstances. Ambition lies less in populating previous male bastions of the work environment, more about owning part of an eroding landscape of physiological opportunity. And when these women find themselves jostling for diminishing air in the same room I wouldn't want to daydream about the outcome, especially if there was only one oxygen mask left.