The seafaring empire of Tonga in the South Pacific Ocean once spanned more than a thousand miles, serving as the hub through which distant settlements exchanged artifacts and ideas, researchers say.

This finding could help explain the rise of monumental structures throughout the Pacific starting about 700 years ago, scientists added.

Tonga is an archipelago of about 160 Polynesian islands, with the core of the kingdom covering an area of about 195,000 square miles (500,000 square kilometers). The islands, located about two-thirds of the way from Hawaii to New Zealand, were first settled about 2,800 years ago by the Lapita people.

Beginning about 800 years ago, a powerful chiefdom arose in Tonga, unique in Oceania — that is, the islands of the South Pacific — in how it successfully united an entire archipelago of islands. However, much remained unknown about how far Tonga's influence actually reached. [Tonga to Madagascar: 8 of the Most Endangered Places]

"How much voyaging and interaction occurred in the prehistoric Pacific has been debated for centuries," said lead study author Geoffrey Clark, an archaeologist at the Australian National University in Canberra.

Tomb of the Tongan kings (Tui Tonga) at Lapaha, Tongatapu.

To learn more about the extent of Tonga's empire, scientists chemically analyzed nearly 200 stone tools excavated from the centers of its leaders, especially artifacts from the royal tombs on Tongatapu, the main island of Tonga. They also chemically analyzed more than 300 stone artifacts and rock samples taken from other Pacific islands, such as Samoa.

"All of the work has been done with a large Tongan workforce from the community who are now being funded to conserve many of the monumental tombs," Clark said.

They found that stone artifacts in Tonga often matched rock samples from Samoa and Fiji — in fact, 66 percent of stone tools analyzed from Tonga were long-distance imports. One tool apparently was made from rock that came from as far away as Tahiti, about 1,550 miles (2,500 km) east of Tongatapu. In contrast, stone tools from a monumental stone mound in Samoa were made from local sources of rock.

These findings revealed that Tonga was the center of a maritime empire that goods flowed toward as tribute from distant locales. The researchers suggest these exotic artifacts may have served as status symbols among Tongan elites.

"Complex societies like the Tongan maritime chiefdom had extensive contacts with other island groups," Clark told Live Science. "The chiefdom was an important interaction hub through which ideas, goods and people could move over large distances."

In addition, these findings could help explain puzzling discoveries seen elsewhere in Oceania. 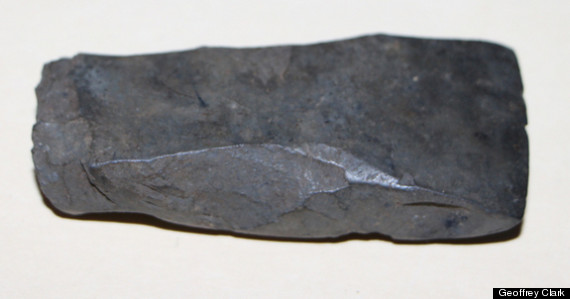 "It has been observed that many of the significant chiefdoms in the Pacific began to build monumental architecture around the same time as one another — 1300 to 1500 A.D. — and it's been unclear why this should be, as the societies are often separated by thousands of kilometers of ocean," Clark said. This new work suggests the formation of the Tongan state may have stimulated these widespread changes in the Pacific.

In the future, the researchers want to find and examine stone tools from before the rise of the Tongan state to understand how interactions between Tonga and other islands changed over time.

"At the moment there are few sites and no significant stone assemblages from this important period," Clark said. "We also want to know whether the high proportion of exotic tools found at the central place of the Tongan state [Tongatapu] exists at other sites in Tonga of the same age. For example, did everyone in Tonga have access to stone tools from Samoa and other places, or did the central place have a higher proportion because exotic stone tools were chiefly valuables?"

The scientists detailed their findings online July 7 in the journal Proceedings of the National Academy of Sciences.

Copyright 2014 LiveScience, a TechMediaNetwork company. All rights reserved. This material may not be published, broadcast, rewritten or redistributed.
Go To Homepage