Tonight, PBS's FRONTLINE will air the second in its two-part series exploring the mounting crisis of antibiotics resistance -- now among the top five health threats facing the nation according to the Centers for Disease Control and Prevention (CDC). The series picks up on last October's sobering account of the misuses of antibiotics in human medicine and how they've contributed to the rise of resistant bacteria -- known as "superbugs." But tonight's two-hour episode focuses more specifically on the problem of antibiotics misuse and overuse in the American meat industry.

Something viewers might be shocked to learn tonight is that a whopping 80 percent of antibiotics sold in the U.S. are for use in livestock, not humans. The majority are used on industrial farms to speed up animals' growth and compensate for crowded, stressful and unsanitary conditions. When antibiotics are used day after day to raise the animals that end up on our plates, some bacteria become resistant, multiply and spread, threatening us all, whether we eat meat or not.

As FRONTLINE reports, the consequences of antibiotic resistance are all too real. Each year, an estimated 2 million people in the U.S. are infected with antibiotic-resistant bacteria -- and at least 23,000 die.

That's why this FRONTLINE series is so important. Doctors, scientists and public health officials are on record stating that overuse and misuses of antibiotics by both humans and in food animals contributes to this threat. We simply won't solve it unless we address both sides. But while efforts are in place to improve antibiotics stewardship in human medicine, similar efforts are largely absent in the livestock industry.

Instead of tackling the problem head on by helping producers advance antibiotics stewardship, the conventional meat industry routinely denies the facts.

Common talking points coming out of the industry stress that administering antibiotics is just one way livestock producers manage disease; that they only use FDA-approved antibiotics; and that scientists have not tied antibiotics use in animal agriculture to specific cases of superbug infections in humans.

We agree! Well-managed facilities, not antibiotics, are key to promoting livestock health. Unfortunately, the FDA just published updated numbers on total sales of antibiotics for use in livestock. As my colleague Jonathan discussed here, the livestock industry overall continues to move in the wrong direction on antibiotic use -- digging all of us into a deeper hole when it comes to the public health crisis of antibiotic resistance. FDA's main finding is that total sales of medically important antibiotics -- i.e. the antibiotics needed for human medicine -- increased 16 percent between 2009 and 2012. In 2012 alone, antibiotic use in the industry jumped nearly 8 percent. FDA's numbers also show that those antibiotics deemed to be critically important or highly important for human medicine by FDA are also among those increasingly sold for livestock use.

In addition, FDA approved antibiotics are the problem. The agency has known for decades that misuse of antibiotics in the livestock industry contributes to the rise of antibiotic resistance and puts the effectiveness of the drugs we rely on at risk. Nonetheless, they've done close to nothing to address the problem.

And as my colleague Carmen, our resident microbiologist, discusses here and here, FDA documents reveal that even FDA-approved antibiotics additives to animal feed have not been shown to be safe and were deemed to pose a risk to human health, according to the agency's own scientists. And the agency's response to the problem of antibiotic resistance has been to propose a loophole-laden set of voluntary recommendations for industry that industry is free to ignore.

Finally, as Carmen details here, studies have indeed found a connection between resistant infections in humans and livestock. The CDC recently published this great infographic illustrating how superbugs bred on the farm can escape and make people sick. 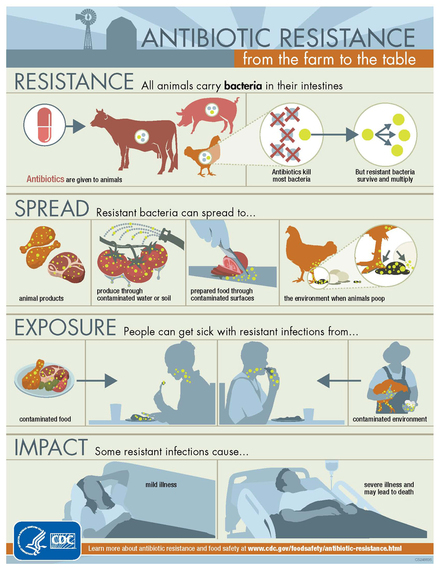 It's important to note that CDC's graphic is actually relatively conservative. As outlined in the figure -- the threat is resistant foodborne pathogens. But what the graphic doesn't mention is that resistance genes can move between different bacteria. In other words, it's not just the resistant farm superbug that's a worry. The farm superbug can pass on its resistance to another bug in the community -- or even at a hospital.

The bottom line is that routinely using antibiotics on livestock that don't need them squanders their effectiveness and threatens the health of people who do.

Some big livestock producers have gotten the message and decided to be part of the solution. Last month Perdue, the third largest chicken producer in the U.S., announced that it's now raising 95 percent of its birds without antibiotics that are important to human medicine. This type of leadership has the potential to transform the chicken industry. In fact, we already see rumblings of this transformation with poultry behemoth Tyson announcing just last week that it has discontinued use of antibiotics in its hatcheries.

Unfortunately, others in the industry remain laggards. Foster Farms -- the top chicken producer in the West and the 6th largest chicken company in the U.S. -- has yet to respond directly to our questions about their own antibiotic use practices despite being linked by the CDC to a drug-resistant outbreak of Salmonella that sickened more than 630 people across the country.

It's disappointing to see the conventional meat industry stick their heads in the proverbial sand instead of marshaling their resources towards helping address this major public health threat. But it's exciting to see a program like FRONTLINE tackle this important issue in such depth and call all the relevant communities -- in human medicine and in animal agriculture -- to action.