When the U.K. released declassified UFO documents a few days ago, the 25 files of nearly 7,000 pages included how:

"Back then, in 1998, if you had said to me that by 2012, the Ministry of Defense will have disclosed virtually everything they have on this subject, I would have found that difficult to believe. And yet, here we are. They have," said David Clarke, the U.K. National Archives consultant (seen in the video above) and journalism lecturer at Sheffield Hallam University.

File DEFE 24/1987/1 is an MoD 1998 briefing for Blair after author Nick Redfern wrote to the prime minister and urged him to make all U.K. UFO reports available to the public. Redfern's request came at the same time that Blair was about to create that country's Freedom of Information Act. 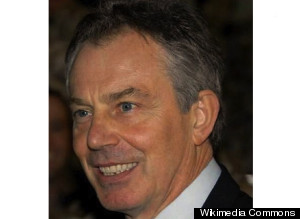 "It appears that the Ministry of Defense decided to give Blair [seen at right], a briefing on UFOs because people were going to start making requests under the new act," Clarke, author of "The UFO Files," told The Huffington Post.

"Tony Blair has since gone on record in his memoirs to say that introducing a Freedom of Information Act is the worst decision he ever took," Clarke said. "It encouraged people like myself to start bombarding various departments of the government with requests. This is why they decided to release the UFO files because they just could not sustain the pressure that we were putting them under."

"It was costing them a lot of money to respond to each individual request and they were having to troll through these files."

Clarke says the numbers of people who have logged onto the National Archives website, 3.8 million downloads, is more than they've ever had before on any other subject.

File DEFE 24/2090/1 references a report called "Unidentified Aerial Phenomena in the U.K. Air Defense Region," code-named "Project Condign." The report, completed in 2000, was first classified as Secret/UK Eyes Only prior to being declassified for public release.

Condign included something that had both serious and frightening UFO overtones -- fatal accidents of Royal Air Force aircraft after UFO encounters.

"There were records of unexplained fatal accidents, where you've got an aircraft that was flying fast and low over terrain, like in a training exercise, and suddenly, for no obvious reason, the pilot had taken evasive action and plowed his aircraft into a hillside, killing the entire crew," said Clarke.

According to the Condign report, while no definitive conclusions could be drawn, it couldn't rule out the possibility that some unexplained losses of RAF military aircraft may have been caused by the pilots seeing some unidentified object ahead of the aircraft. That object, if it was there, could have caused the evasive action that led to the aircraft being lost.

"When I read that, I thought, 'Wow!' The fact that they were seriously considering that as a possibility for the loss of military aircraft was just incredible," Clarke said. "But nobody picked up on it at the time the report was released. I tried to get the media interested, and nobody would touch it."

To show how serious this matter was, Clarke says the author of the Condign report recommended that military air crews be advised that, in the future, no attempt should be made to out-maneuver an unidentified aerial phenomenon. And the same applied to civilian crews.

File DEFE 24/2090/1 also discusses how some UFOs may be the result of strange, atmospheric plasmas and that "Russia was interested in harnessing these plasmas for potential military use," Clarke said.

"They didn't think it was alien technology -- they thought it was some kind of natural phenomenon that existed in Earth's atmosphere. If they could somehow work out how these [things] were created, they'd be useful on the battlefield. If you could produce some fantastic spinning orb on the battlefield that knocked out your enemy's electronic equipment, what a fantastic weapon to deploy," Clarke added.

Clarke says a final batch of about 25 more UFO files is expected to be released by the British government within the next 12 months.

The UFO files are available for free public download until Aug. 11, 2012. And to help you navigate through the files, check out Clarke's excellent research guide.