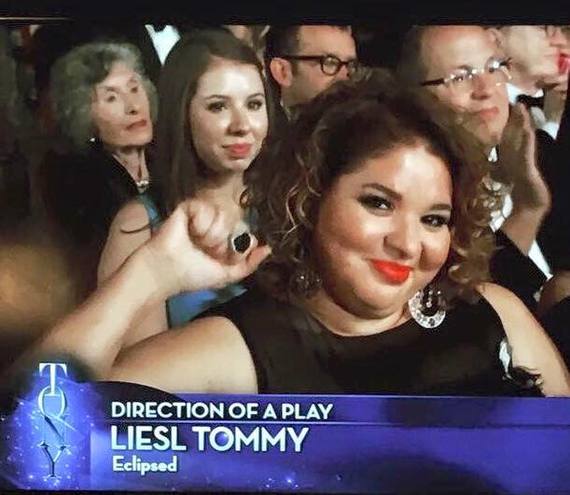 Liesl Tommy is the first woman of color ever! to be nominated for a Tony Award for Best Director of a Play. But this great artist has done much more than make history on Broadway. She has continuously given voice to the voiceless with her revelatory work.

I have known Liesl since the 90's when we were both training to be actors at Trinity Rep Conservatory (now the Brown Trinity Consortium). My first chance to work with her was a small directing class project for which she had an hour to stage Maya Angelou's poem, "The Traveller.":

Manless and friendless
No cave my home
This is my torture
My long nights, lone

First she let me and the other actors read those words silently. Then she listened to what we had to say. Intently. Searching for the human truth deep inside each one of us. This was my first encounter with Liesl's unwavering desire to absorb the specific experience of every person she meets.

She told us how the text affected her. It reminded her of late nights at clubs; strangers bumping up against one another; so close together yet so far apart.

And then she took charge--the way she does, with authentic warmth and gravitas--and asked us to get up and dance. As she watched us move--in all those awkward ways one does in mixed company--she suggested internal monologues for each of our "characters," based on our individual reactions to the poem.

The finished piece--performed in a stairwell--featured an entanglement of friendless strangers dancing the night away, troubled by their own private thoughts. Whenever the music stopped, all but one would freeze, giving each lone dancer the chance to put words to her internal yearnings. Then came that hideous finale to a night of clubbing--with which we're all familiar--when the rude bright lights obliterate the sexy illusion of closeness to reveal the raw chill of isolation.

Then and there I became a lifelong fan of Liesl Tommy, and her passionate drive to spotlight the interior lives of those who have remained in the dark.

I gleaned from her not only a way to make art, but a way to build a meaningful life. I think of her when I tell my psychotherapy clients how rewarding it is to stay on your own side while being endlessly curious about the inner lives of other people; to make yourself heard and to absorb various points of view at the same time. With those goals in mind we can find riveting moments of recognition between us and the world.

Liesl has created numerous moments of this kind with theater, from directing small conservatory performances in stairwells, to her current crowning achievement on Broadway, Danai Gurira's Eclipsed. And through her decades of work she has given artists and audiences myriad opportunities to identify with people that both the entertainment industry and the society that produces it, too often keep silent and invisible.

As a storyteller she not only searches tirelessly for the truth of every character, but also of every actor. As a result, her audiences become intimate with people they would never even think about in their day-to-day lives, or get a fresh perspective on characters they may have seen before, but not necessarily with the urgent specificity, or contemporary social relevance, with which Liesl imbues them.

As a talented actor herself, she became disenchanted with auditioning in New York, since the industry did not produce stories about anyone remotely like her, or like the spectrum of lives across the globe in which she had a personal interest. So she began to tell those stories herself, and shifted the paradigm.

As a director she searched for new scripts about all kinds of people we rarely see in the straight, white, athletic-bodied, gender conforming, western, male, "naturalistic," world of New York theater. She cast plays from the canon with diversity in mind, not as an exercise in political correctness, but as an investment in unique, passionate human beings who have a lot to say, but rarely get the opportunity to speak.

For example, I was lucky enough to be in a contemporized production of Love's Labor's Lost that she directed, in a parking lot no less. This Shakespearean romance involves four royal women who are pursued by four royal men, and who are all typically played by gender conforming, white actors. Never one to sleepwalk through the steps of conformity, for the ladies, Liesl found three African American women, each with highly distinct personalities and points of view, and for the fourth she cast me and adapted the role to be a gay man--which is what I am, though I almost never had the chance to play that at the time, and certainly not in Shakespeare. This way the audience got to experience specific journeys of love and loss from the perspectives of people who are marginalized and stereotyped in the mainstream.

Years later, she would cast her version of the universally popular musical, Les Miserables, at The Dallas Theater Center with a similarly open mind, and garner international attention and critical acclaim; the production was called "revolutionary," "fresh," and "thrilling." And cut to Liesl's stage adaptation of the blockbuster movie Frozen, now playing at Disneyland's 2,000-seat Hyperion Theater, where racially diverse audiences get to see racially diverse actors inhabit iconic roles.

My point here is that when we share our authentic stories and listen carefully to those around us, we all win. We can willfully break from the march of conformity--which always eclipses our potential--and create opportunities to know one another and to be known. We can do this through our art; our activism; and in our everyday lives, with our voices, minds, and hearts, whether we reach two people or two billion. And we can thank people like Liesl Tommy for showing us how.

I'll never forget one brutal morning when Liesl and I were struggling New York actors, waiting on an impossibly long line for an Equity open call. She glanced at the throng of dedicated artists, all looking as degraded and forlorn as we did. Then she looked to me with can't-be-bothered eyes, and said with captivating conviction, "When I'm a big star, I'm gonna make some changes."

Well, Liesl Tommy, you're a big star now, and the changes you've already made have inspired lonely travellers all over the world to speak for themselves.