You can't ignore him. His voice filters through every cell in your body awakening them one by one. Anthony Robbins calls something up that's already in you, your destiny, the very thing you were born to do; and if you listen to him long enough he has the power to make you act on it. But that's your call what you do with it. This is his message, that's what he does; helps you figure out how you can contribute more to the society, how can you make the world a better place. 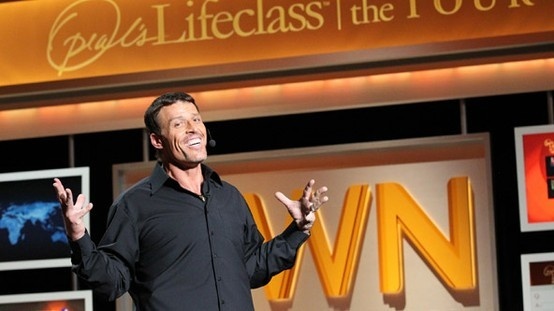 Right at the beginning of his TED talk, he claims he's not there to motivate but "he is the why guy." He's there to help you answer the questions: Why you do what you do; what's your motive for action? If you think it through you'll realize how brilliant he is. Nobody has the power to motivate you. Nobody but you. At the age of 18, I attended several motivational seminars and I absolutely loved them. However, what I saw there kind of made me doubt what I had planned for my future. The people were sitting there nodding heatedly but as soon as they got home they carried on with their everyday lives as if they forgot everything they just saw. Do you know why? Because only you have the means to motivate yourself. If you don't have the drive to encourage yourself then no one will. You have to believe that you are worthy enough, that you have what it takes to achieve your goals if you put effort into it. You can of course be inspired by those who made it far but is it really going to move you forward? Most likely not. You'll give up over and over again because it's easy to get deluded by all those things you can't do or don't have. One very commonly used excuse is "I don't have the money to achieve my dreams."

My book -- Connected -- became a bestseller but only a few know that I wrote this novel on a 6-year-old PC, which was missing five buttons including the space bar. But I didn't care. I could have said, "Well, I can't start working until I have a Mac as every writer and blogger works on Macs..." but I didn't. I didn't let the shortage of resources stop me from focusing on my thing what I needed to do. If something needs to happen trust me it will find the way to do so.

After all, it's not a coincidence that he is searching for the WHYs as he knows you wouldn't be willing to take a step unless you get to the point yourself when you've had enough and you need and want a change. Those people that you've given everything to, all the resources they need, the best of everything even love and joy; these people very often end up going in and out of rehab. And here is the WHY again. Because they didn't have the joy of fulfillment. They had everything given as a birthright so they never learned how to fight for things that give them the joy of fulfillment. I've seen it myself. She/he was a millionaire, had everything you can think of and still he stole from others and notoriously got himself into trouble.

And then you meet people who've been through ultimate pain; psychologically, sexually, emotionally abused, and not always but often they become the people that contribute the most to the society. But of course it doesn't refer to those who are blocking the best things from happening by the constant stream of excuses or those who are trying to make a victim of themselves.... Again, we've seen these people before, I'm sure you have already had personal encounter with a living example.

Tony admits that he is coming from a poor family. His dad firmly believed that nobody cared about them until one day on Thanksgiving a stranger brought food for the family. This could have well been a moment of humiliation hinting the fact that the father is not even able to bring food home for his family but this is not how Tony saw the whole thing. And he was right. Somebody tried to help them out. And since then he's known that people (strangers) do care about each other. From that time on he's devoted his life to help others in need. He created a foundation that distributes food among more than two million people facing hunger and poverty.

Wikipedia explains, Tony Robbins is an American life coach, self-help author and motivational speaker. He was ranked by the Harvard Business School Press among the 'Top 200 Business Gurus". Robbins' programs have reached over four million people from 100 countries around the world. In his book Awaken the Giant Within, Robbins recalls meetings with various celebrities, saying he was a student of their success. People he mentioned were Bill Clinton, Anthony Hopkins, Princess Diana, Andre Agassi, NBA and NHL superstars. He is also the author of five bestsellers.

Tony Robbins is in a constant quest to explore the motives that bring change in people's lives. Everyone has something they are good at that can make them go beyond themselves. But how do you activate this knowledge, this inner power? It's easy to find excuses for the things you fail to achieve hoping that everything is going to be just fine. But you know most successful people didn't have all the resources when they first started off. It's exactly the opposite: success always stems from things you don't have. But instead of feeling sorry for yourself you should listen to your inner voice that tells you what you need to do to make things happen. If you do it you can achieve ANYTHING. If you don't have the money you'll find the way to get some or the resource itself will find you. But you can't skip the 'make an effort' bit. The world around you is your creation; it's your baby. You forged it with your thoughts and decisions. Knowing this you probably realize how important it is to get rid of all the negativity and blocking elements in your life in order to bring something much better in. Something that will make you stronger and braver; something that will make you a fighter to be able to get to where you need to be. Sometimes it's just about a decision. A decision that will change your life forever.

It's hardly a surprise that he likes to put courage in the centre of his seminars. During one of his workshops for instance, 'walking on fire' was a key element that was supposed to help people confront and conquer their fears.

Give yourself a shot. Give yourself the chance for a happier life, a life that makes you fulfilled and content. As long as you are not living the life you were destined to you are slowly dying inside. If you don't listen to your guts that are trying to tell you what to do, you will be utterly unhappy. Your soul is going to suffer, it's going to be dying of your disbelief that you didn't give yourself the chance to be more, to do more according to your best capabilities. If you are unhappy with your life then make a change. Hit the restart button and find your thing that gives you joy every day, that it's worth getting up for. Forget about your "boundaries," there are no limits, only those that you created in your head. You don't need them anymore. But if you give up on yourself, you will become a prisoner in your own life suffering from all those missed opportunities that were in front of you, that you should have just had the courage to realize.