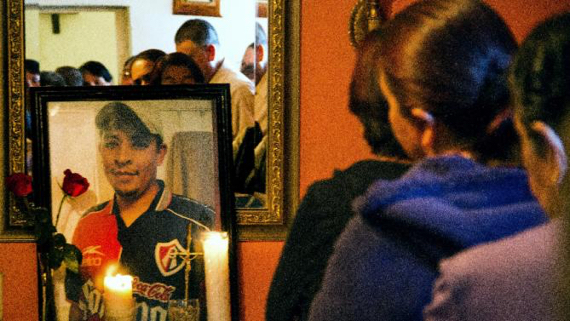 On Friday, February 20, a police officer shot and killed Mexican national Rubén García Villalpando on the side of a highway outside of Dallas, Texas. García was unarmed and reportedly had his hands in the air shortly after stepping out of his vehicle.

On Friday, March 6, another officer shot and killed unarmed African American Tony Terrell Robinson, Jr. in Madison, Wisconsin. By the following Monday, around 2,000 people were out in the city's streets protesting the shooting death, holding a large banner that read "Black Lives Matter."

Interestingly, the same day of the protest, Robinson's uncle, Turin Carter, gave a family media statement that explained his nephew was not just "black." He described Tony as "black, white, he's a mixture of everything."

"I encourage everybody to show support regardless of race," continued Carter, "because this is truly a universal issue." Police brutality is an issue that everyone should be concerned about, but especially since U.S. law enforcement generally finds it easier to take "non-white" lives.

The deaths of Tony Robinson, Rubén García, and numerous others reflect a difficult past and shed light on our present struggles with race in the United States. The routine police violence against Latino, Indigenous, and African American men highlight how state officials treat "black" and "brown" bodies under the law.

The current atmosphere of police brutality shows that many men of color continue to live in a police state in the 21st century United States. When racial profiling, police brutality, and general discrimination are proven to be systematic in our society then we should all be pushing for actions that create change together.

"Are You Going to Kill Me?"

Without downplaying that law enforcement heavily single out African American men, it needs to be recognized that police target other men of color as well. Last month, police in the U.S. shot and killed at least three unarmed Mexican nationals.

One of these killings took place in the suburbs of Dallas, Texas, where a dashboard camera recorded rookie officer Robert Clark pulling over Rubén García after a brief car chase. The 31-year-old García steps out of his vehicle, puts his hands in the air, and asks: "Are you going to kill me?" García begins walking towards the officer who yells profanities while telling him to stop moving.

Family members who have seen the video say that García's body language was peaceful and that he was nervous. After he steps out of the camera's view two shots go off, which hit García in the chest. The father of four children died from his wounds.

The officer was unharmed. García was unarmed.

"If my husband had killed a police officer, he would be in jail," said Marta Romero. García's widow continued, "but since it was the opposite, will they just leave it this way?" Questioning the mistreatment of undocumented people in the U.S., she asks: "What are human rights then?"

Exactly two weeks later in Madison, Wisconsin, officer Matt Kenny responded to reports of a "male black, light skinned" who was "yelling and jumping" in traffic. The police dispatcher radioed that "apparently, Tony hit one of his friends" and that there were "no weapons seen."

Officer Kenny went to the apartment that 19-year-old Tony had entered and while outside said he heard a disturbance coming from inside the apartment. Around this time the dispatcher received another call from someone reporting an assault within the apartment. An officer on the radio can be heard saying "we have to enter" and then Kenny forced his way into the home.

Apparently a struggle ensued where both men sustained injuries. Officer Kenny's injuries have not yet been released. Robinson ended up shot and died from his wounds.

"White Mother of a Black Child"

The deaths of Tony Robinson and Rubén García show that law officials use lethal force against men of color who might not identity themselves as "black." Like many "black" men, these two men were both on the margins of society.

Turin Carter explained that Tony "felt a misfit for most of his life" and his nephew's "identity was formed because of his racial ambiguity." As he spoke to the media, Carter highlighted the mixed background of his family who stood around him.

Tony's mother, Andrea Irwin, was present and Carter described her as "a white mother of a black child, black children, who have white and black relatives." Speaking about her son in a separate interview, Irwin said that she "doesn't know how to live without him."

A similar situation arose last September when Susan Hunt, also of European heritage, claimed police in Utah used excessive force when they killed her African American son. Police shot Darrien Hunt six times as he brandished a samurai-type sword -- the fatal shot was in his back as he was running away.

Darien's mother claims that "no white boy" would be shot like this for carrying a sword. To Susan Hunt it was clear: "They killed my son because he's black."

The Darien Hunt and Tony Robinson killings show that families of multiethnic men might view their children in different ways, yet society and police often see them as menacing "black" males.

While Tony Robinson's uncle understood that the police categorized his nephew based "off his appearance," Carter still took the time to explain to the media that "there's no way you can look at Tony, or any of my nephews, and be able to determine 100 percent what we are in terms of our heritage and our ethnicity."

This may be true, yet this is what we often miss: ethnic heritage and race are two different things.

While Tony may have personally identified as a person of mixed ethnic heritage, being "light skinned" did not save him from being racially profiled as "black." Race is how police matched the young man to a "black" male suspect description and it may have also played a role in why the officer perceived Tony as such a great threat.

It's important to realize that Tony Robinson's family was not trying to distance themselves from "blackness" by acknowledging their "complex heritage." They actually made a point of connecting Tony's death with the killings of Michael Brown and Eric Garner this past summer.

"We don't wanna stop at just Black Lives Matter," said Carter, "because All Lives Matter." In this way, the family is trying to bring others into the "Black Lives Matter" movement. Broadening the scope of involvement, while retaining the message that racial discrimination needs to stop, is a positive way to gain allies.

Law enforcement also often mistreats the poor, homeless, and the mentally ill of all backgrounds. However, many times these victims are also people of color. That's why it's important to recognize that the fight against police brutality begins with "black" and "brown" bodies and extends to others.

Why We All Must Fight

Each case of law enforcement using lethal force is different and we need to carefully examine evidence before jumping to conclusions. Still, there's a problem when a pattern of deaths result from police who are supposedly following regular codes of conduct.

The use of procedural force by law officials has shown itself to be systematically flawed. Therefore it's time to change how officers engage suspects, especially men of color.

Certainly, police can use tazers, pepper spray, or shoot non-vital areas on an unarmed suspect when they feel threatened. Making these judgment calls quickly is not easy, yet when it gets to the point where an officer shoots dead a naked African American man with no weapons, then we need to reevaluate the system and call this what it is: murder.

Police departments that routinely target men of color (see Ferguson and undoubtedly many others), and college fraternity students that proudly shout the N-word while glorifying lynching African Americans from trees, are disturbing reminders that we need to battle entrenched, systematic racism.

Police brutality is just one area that proves that words do not just sit harmlessly in our heads. Racist emails and songs that are repeatedly passed along help to inform and form our beliefs. These ideas have real-world effects on people's lives.

We might not be able to measure exactly how much a racist view makes it easier to draw a gun or pull a trigger, but we can say one thing: bigotry helps.

The U.S. has long been a police state for Latinos, Native Americans, African Americans, and other men of color. Police brutality is a reality today. The only debate needs to be on how best to change it. If we are going to push back against future growth of militaristic policing in the U.S. then we will all need to get behind this important struggle together.