Tony Scherman is a painter's painter, because other painters who paint with a seriousness of purpose immediately recognize in his distinctive work a high command of skill, idiosyncratic maturity, captivating inventiveness, and an obvious love of picture-making, particularly portraiture. Thriving artists employ a hard-earned knack to recognize strength and nobility in painting, and accordingly, can identify and appreciate the acquired expertise of fellow artists like Scherman, who has earned respect and admiration from a dedicated following. His new series should convince anyone that this is unusually prodigious painting that is not easy to forget. The Cream of Denmark, Scherman's current show at Winston Wächter Fine Art in Chelsea (New York), which has been extended by popular demand through January 4, offers all the convincing evidence that one needs to determine that abundantly beautiful painting is not dead or forgotten, but very much alive and vibrant.

Scherman works with bubbling hot encaustic medium; applying thick, melted, meandering swaths of cooked, colored beeswax onto primed canvas, which is then patiently layered with multiple, tinted transparent coatings. The waxy substance, a favorite of Jasper Johns for its sculptural attributes, is systematically assembled from scratch like a secret homemade pie recipe from memory that ultimately rises to form an aromatic, appealing three-dimensional surface. These confident and literally heated brushstrokes precisely accent, hermetically seal and permanently encapsulate the original underpainting. Prior to this exhibition, I made several informative discoveries when I visited Scherman's studio located in a large industrial building downtown in his native Toronto. What made the initial entrance into this spacious environment so memorable and unique was recognizing the immediate scent of melting wax in the air, generated by dozens of gas-fired stove pans brewing a creative concoction as if a restaurateur was prepping for a gastronomical masterpiece. Piles of drying, pigmented ingredients, built up over the years on table palettes, are vaguely reminiscent of a distant Technicolor mountain range that stretches from one grand room to another. I'm reminded of Larry Poons' extraordinary loft space on Broadway, the former studio of de Kooning, where remnants of flung paint flying through the air for decades eventually began to cover and flavor everything in its path, and even had camouflaged completely a broomstick left to fend for itself in a corner. These circumstances are not constructed from accidents, but are privileged, deliberate evidence of artists exploring over and over the endless scenarios that compel them to keep moving forward with their work.

Tony Scherman is understandably considered by many to be a king of this uncommon encaustic technique, and the resulting fascinating foundation of thick coats of colored wax transports a nearly spiritual form to his pensive compositions. His subjects are often historical figures or celebrities that seem frozen in time, but are still aware with a curious vitality that communicates a visual dialogue directly between the viewer and the literally larger-than-life portrait.

In this latest series, he has repositioned his illustrative mark-making from a biographical context into the territory of fictional portraiture. The Cream of Denmark reveals in glamorously haunting portraits the protagonists of Shakespeare's Hamlet as seen from the title-character's perspective. The pensive floating heads, some of them approaching nine feet in height, are mesmerizing, as the subjects stare without blinking or look to the side out of fear that their deeply buried secrets might be revealed through their eyes. These riveting portraits are well-suited to illustrate the psychological decline and menacing, suspicious mindset of one of literature's favorite anti-heroes. Scherman subliminally mixes his own life experiences with a famous play that according to him, "starts badly and only gets worse." Indeed, there is an undeniably sympathetic, emotional tenderness that attaches itself to themes of adoration, infidelity, revenge and despair. But like a great movie plot that thickens just before the climax, in this case through layers of cooling wax blended into a single frame, the audience is persuaded to find their own interpretations. Without a script or the advantage of a cue card, all that's left is an anonymous "storyboard" of handsome suspects created methodically by the artist. In this dramatic theatre of circles in a square, spectators of this show can cast aside at will, if necessary, insinuation and metaphor and simply zero in on the breathtaking, stark beauty of these paintings that stand proudly on their own.

The Conscience of the King 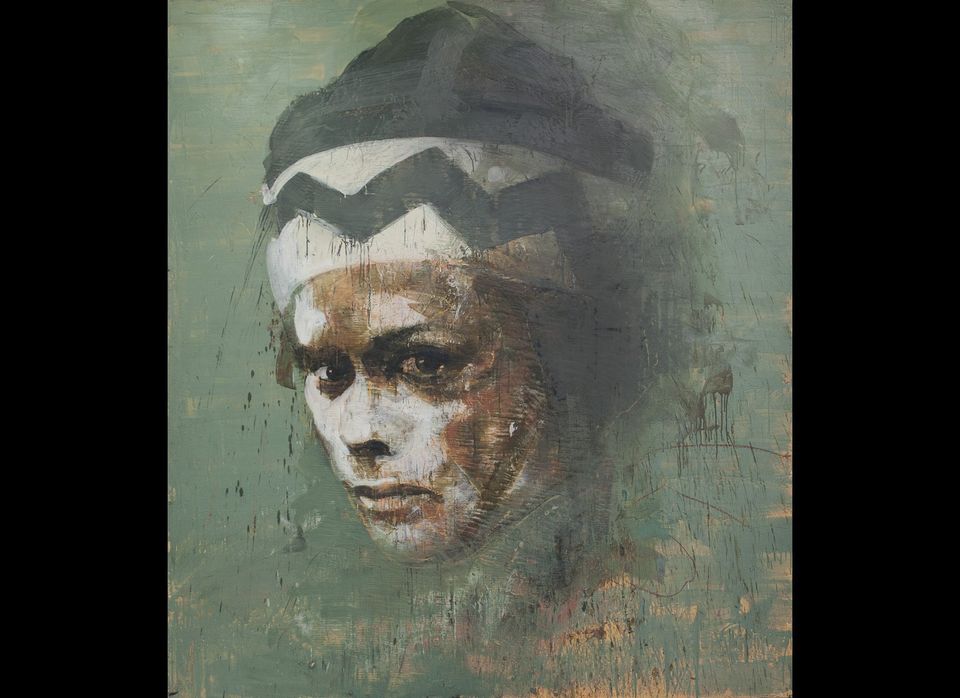