UPDATE: A rep for "Sopranos" creator David Chase has released a statement claiming that Vox "misconstrued" what was said during their interview:

A journalist for Vox misconstrued what David Chase said in their interview. To simply quote David as saying,“ Tony Soprano is not dead,” is inaccurate. There is a much larger context for that statement and as such, it is not true. As David Chase has said numerous times on the record, “Whether Tony Soprano is alive or dead is not the point.” To continue to search for this answer is fruitless. The final scene of THE SOPRANOS raises a spiritual question that has no right or wrong answer.

PREVIOUSLY: It's one of the biggest and most over-analyzed mysteries in television history: Does Tony Soprano die at the end of "The Sopranos"?

The ambiguous ending to HBO hit, in which Tony, his wife and son are sitting at a restaurant table before a sudden cut to black, left fans on the edge of their seats -- where they remained ever since the 2007 finale. There are both the Tony-is-alive team and the Tony-is-dead team, but, up until now, "Sopranos" creator David Chase hasn't given a direct answer to anyone.

However, in an interview with Martha P. Nochimson on Vox from Wednesday, Aug. 27, Chase finally answered the question (sort of), much to his annoyance. While talking with him in a coffee shop, Nochimson "popped the question" randomly and caught the "Sopranos" creator off guard. Nochimson writes, "Chase startled me by turning toward me and saying with sudden, explosive anger, 'Why are we talking about this?' I answered, 'I'm just curious.' And then, for whatever reason, he told me." Chase did tell her, but the way she presents his response is in a manner just as perplexing and ambiguous as the debated scene itself.

In the long article, Nochimson claims that she's finally solved the Tony mystery. Instead of publishing Chase's response within the text of her lengthy article, which covers Chase's work since the series and his influences, she includes it only in a graphic in the middle of the piece that reads: "Just the fact and no interpretation. He shook his head 'no.' And he said simply, 'No he isn't.'" 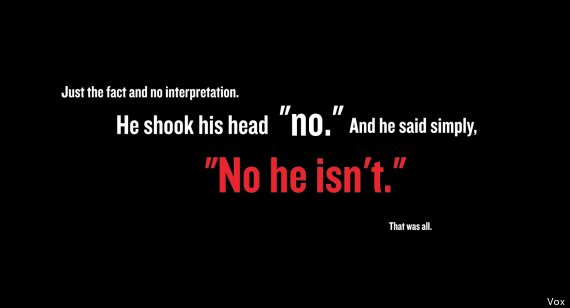 Nochimson then goes on to conclude (in the text of her article now) that "Tony's not dead." At first this feels like the mystery has finally been solved, but wait, Nochimson didn't tell us the exact question that she asked Chase, which would hugely affect how we understand his response. Did she ask him if Tony is dead, or if Tony is alive?

Alan Sepinwall over at HitFix interpreted Chase's response as "just one more attempt to elude an explanation." We can totally agree, since why would the man finally give a direct answer to the question he hasn't answered in seven years, and one he was frustrated over being asked in the first place? Also, why would she include his answer in graphic form instead of a more traditional, question-answer format in the article itself? Some journalists, including one at Uproxx, seem content that the mystery has finally been solved and that Tony is indeed not dead. We're not too sure it's as black and white as that, but then again, who wants such a huge mystery to be solved so easily anyway? Now we just have even more to debate over.