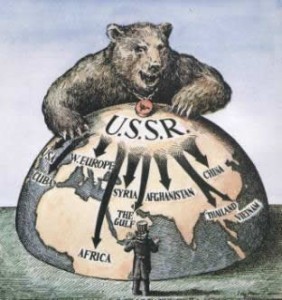 In 1994, through an accident of fate, the newly independent country of Ukraine found itself in possession of the world's third largest nuclear arsenal.

At first, Ukraine planned to keep its nuclear weapons. But, at the insistence of the two strongest powers in the world -- Russia and the United States -- Ukraine agreed to give up their nukes in exchange for perpetual guarantees of sovereignty and territorial integrity.

This supposedly ironclad treaty, signed 20 years ago, was the Budapest Memorandum.

The world was a different place then. The Soviet Union was breaking up, and many of the former Russian satellite states in Eastern Europe were becoming independent countries.

Why not give up their nukes? Russia was their protector and would always be there, and the U.S. lived up to its treaties. Ukraine didn't need nuclear weapons. The Treaty was signed by Bill Clinton, Boris Yeltsin, John Major (of England) and Ukrainian President Leonid Kuchma.

All of these leaders agreed to protect the sovereignty and "territorial agreement" of Ukraine, meaning any Russian support for Crimean independence would be in violation of Russia's international obligations.

The three powers committed to "respect the independence and sovereignty and the existing borders of Ukraine" and "refrain from the threat or use of force against the territorial integrity or political independence of Ukraine."

You can be sure that Vladimir Putin wouldn't have seized Crimea if Ukraine had kept their nuclear weapons.

What lesson has this taught the other nuclear countries that still have the bomb: India, Israel, South Africa, Pakistan, North Korea, Russia, France, England and, maybe, soon-to-be Iran?

What Should the U.S. Do Now?

The past is the past. The key question now is: how important is Ukraine's regional crisis to worldwide geopolitical interests?

If the end goal of the U.S. is to isolate Russia by prying away its former Eastern European satellites, and destroy Russia's economy further, tough talk and sanctions are the way to go.

But, this is very dangerous and may lead to unanticipated consequences.

Putin, a fervent nationalist, has been feeling under attack by pro-U.S. influences and economic power for some time now. The ring of pro-Russian countries that buffered the Soviet Union is almost gone. NATO is closing in on Russia's territory. Twelve former Warsaw Pact nations and republics have joined NATO, a military alliance historically directed against Russia:

There is no Eastern Bloc left anymore. East Germany, where Putin was posted as a KGB agent for five years until the fall of Berlin in 1989, has been swallowed whole. This increasing Russian isolation and fear of losing its influence and markets is what prompted Putin to offer $15 billion to the Ukraine earlier this year to keep up a Russian Trade Agreement.

Russia feels it is being slowly put into a cage, and humiliated. Putin -- supported by a majority of the Russian people -- doesn't like it. Remember what happened after World War I, when Germany felt besieged and belittled on all sides? Its ethnic German territories, with millions of German nationals, were gobbled up and incorporated into neighboring countries. German currency became worthless because of hyper-inflation. The German economy was hobbled by the reparations it was forced to pay to the Allies.

We all know what happened. Resentment, fear, and anger led to the growth of right-wing German nationalism -- with horrific consequences.

Of late, the New York Times and the Washington Post have been beating the drums of war and, of course, we don't want to pull another Neville Chamberlain and applaud the creation of many mini Russian Sudetenlands.

But do we really want Barack Obama to put all our geopolitical marbles on what is essentially a regional conflict?

We should look carefully at what is at stake from a global perspective. The U.S. and the West need Russia's cooperation on a number of large-scale macro issues:

-- The fight against Islamic terrorists is of paramount importance to both superpowers. Russia is under siege in the Caucuses, Chechnya, Dagestan and many of its former and present Asian-Muslim Republics. The U.S. is being targeted by Islamic terrorists throughout the entire Middle East, Egypt, Syria, Libya, and Gaza, as well as large swaths of North Africa.

-- The need to prevent further nuclear proliferation and speed up disarmament is essential. Iran must be dissuaded from developing a nuclear capability. Japan, South Korea, Egypt, Syria, Turkey must be convinced that they don't need nuclear weapons, just because their enemies have them.

-- The U.S. needs Russia's help in keeping the Middle East from blowing up, particularly in Syria. Putin is supporting the Assad regime because he thinks that the alternative would be a Jihadist victory -- not such a farfetched possibility. Russia did encourage Assad to give up his chemical weapons.

-- North Korea and the China seas is another particularly sensitive area. We need Russia to exert a stabilizing hand there, so that the risk and temptation to use nuclear weapons is minimized with eventual disarmament.

Russian Crimea is a fact and we ought to get over it.

The U.S. must also recognize that Russia will not allow the U.S. or the European Union to gain influence over any more immediate Russian Border States and enclaves -- no more than JFK would allow Russia to put missiles in Cuba in the 1960s. We know what Russia is capable of when backed into a corner. We don't want another invasion of 500,000 Russian troops, as happened in Czechoslovakia in 1968 or Hungary in 1956.

Russia has its own version of the Monroe Doctrine and is not going to give up hegemony over any more neighboring Russian ethnic groups.

If the saber rattling continues, without any means of backing it up, things might not turn out the way we want them. The repercussions are unknowable. Who could have predicted that the U.S. would end up killing 300,000 Iraqi civilians in our efforts to liberate them from a dictatorship?

There is another path.

The U.S. should tone down the rhetoric and concentrate on the core issues for worldwide peace and accept the Crimean reality. The solution will evolve slowly, if we let it. Something like the semi-autonomous Russian populated regions in Georgia. South Ossetia and Abkhazia, which are populated with Georgian citizens who have Russian passports but are still technically residing in the country of Georgia.

An odd situation, but it seems to be working now -- there has been no large-scale violence for several years.

The world today is a dangerous tinderbox. This is not the time to speak loudly and carry no stick. We should not be throwing down gauntlets and drawing red lines in the the sand. Obama's patience, and proclivity to lead from behind, should be applauded.

The E.U., while condemning the Crlmean takeover, has been reluctant to use harsh rhetoric or to adopt stringent sanctions. They know how volatile things can become.

The old order is passing. With this re-balancing of global power from decades of cold war peace and predictability, the U.S., more than ever, needs the cooperation of Russia on many international fronts where we have common interests. What we don't need is to force Putin into a diplomatic and economic corner with increasing sanctions. A weakened and desperate Russian bear will be unpredictable, which will have a destabilizing effect on too many critically important matters that we dare not neglect.