In July 2010, Martin Joel Erzinger, a hedge fund manager for extremely wealthy investors at Morgan Stanley Smith Barney, was driving his car near Vail, Colorado, when he hit a bicyclist from behind and then sped away. The Vail Daily reported that the victim, Steven Milo, suffered "spinal cord injuries, bleeding from his brain and damage to his knee and scapula," which left him facing multiple surgeries. The newspaper's account of the incident makes clear that Erzinger should have been prosecuted for this incident.

Milo was bicycling eastbound on Highway 6 just east of Miller Ranch Road, when Erzinger allegedly hit him with the black 2010 Mercedes Benz sedan he was driving. Erzinger fled the scene and was arrested later, police say.

Erzinger allegedly veered onto the side of the road and hit Milo from behind. Milo was thrown to the pavement, while Erzinger struck a culvert and kept driving, according to court documents.

Erzinger drove all the way through Avon, the town's round- abouts, under I-70 and stopped in the Pizza Hut parking lot where he called the Mercedes auto assistance service to report damage to his vehicle, and asked that his car be towed, rec ords show. He did not ask for law enforcement assistance, accord- ing to court records.

Committing a hit-and-run is a felony in Colorado, and leaving the scene of a crime constitutes a felony as well. Nevertheless, the district attorney, Mark Hurlbert, announced that Erzinger would be charged only with a misdemeanor, which carries no jail time. Hurlbert's explanation for not charging Erzinger with any felonies was blunt: "Felony convictions have some pretty serious job implications for someone in Mr. Erzinger's profession."

In other words, Erzinger engages in such vital activity that charging him with a felony would be wrong because it might seriously disrupt his work: managing the money of multimillionaires and billionaires. According to Worth magazine, Erzinger "oversees over $1 billion in assets for ultra high net worth individuals, their families and foundations." If he were charged with a felony, he would be required to report that fact to licensing agencies; a felony conviction could result in his fund manager license being rescinded. Apparently, as far as the district attorney was concerned, it would be terribly unfair to subject someone like Erzinger to the risk of damaging his career, though presumably someone with less to lose could -- and would -- be charged as a felon without any such worries.

Hurlbert added that Erzinger's willingness to pay restitution to his victim also militated against prosecuting him: "The money has never been a priority for [the victim]. It is for us. Justice in this case includes restitution and the ability to pay it." As Felix Salmon of Reuters put it, the Erzinger case was thus a classic demonstration of how to "buy your way out of a felony charge." But it was also more than that. Hurlbert's decision was grounded in what has become a well-entrenched principle: certain individuals are simply too important to be subjected to criminal prosecution.

Once the Erzinger case was publicized by the talk radio host David Sirota and by Colorado newspapers, there was a public uproar. More than ten thousand local residents signed petitions demanding the filing of felony charges, to no avail. And although the incident eventually attracted significant attention, Hurlbert's logic is notable precisely because it is so common. Indeed, the same type of immunity from legal consequences is continuously granted to the financially powerful on a much larger and more consequential scale.

The shielding of the Colorado hedge fund manager illustrates how reflexively exemption from the rule of law is now bestowed on the nation's wealthiest, and it highlights the means used to accomplish that. Even the massive recklessness and fraud that in 2008 spawned one of the worst financial crises in modern history has produced very little legal accountability -- and almost no criminal liability -- for the perpetrators so far, and is quite unlikely to do so in the future. Nor have the 2010 revelations of systematic industry-wide fraud by mortgage-holding banks prompted anything besides efforts by the political class to protect that plundering industry. And to justify this lack of accountability for the nation's wealthiest lawbreakers, the all-too-familiar excuses long used to shield the politically powerful are trotted out on cue. Once again, we are told that prosecutions are too disruptive; that it's more important to fix the system than to seek retribution for the past; that because the wrongdoers' reputation is in tatters, they have already suffered enough; that we need the goodwill of financial titans to ensure our common prosperity; and so on.

The granting of immunity to the telecoms after the Bush wiretapping program was a travesty because corporate giants were able so flagrantly to purchase retroactive exemption from the rule of law. But the steadfast refusal to hold financial elites accountable for the 2008 financial crisis and 2010 mortgage fraud scandal represents a whole new level of lawlessness. As disgraceful as the telecom amnesty was, at least it was given by an act of Congress and thus had some legal pretense to it. By contrast, in protecting Wall Street, the executive branch simply violated its core constitutional duty: to "take care that the laws be faithfully executed." 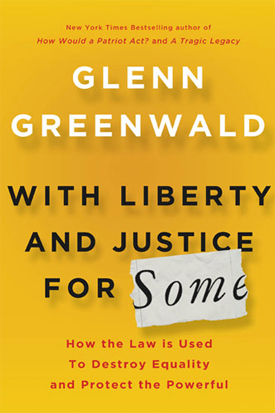 Moreover, while the immunized telecoms had broken the law in conjunction with government programs, the crimes for which Wall Street barons are being protected are purely private ones. Worse still, the scope of these financial crimes is so vast, and the suffering they have caused so deep and enduring, that the refusal to impose any consequences on the culprits proves the near-absolute nature of this elite lawbreaking license. It is now clear that there are virtually no limits on the magnitude of the crimes that the nation's most powerful private actors can commit with impunity.

Excerpted from WITH LIBERTY AND JUSTICE FOR SOME: How the Law is Used to Destroy Equality and Protect the Powerful by Glenn Greenwald, published October 25th by Metropolitan Books, an imprint of Henry Holt and Company, LLC. Copyright © 2011 by Glenn Greenwald. All rights reserved.