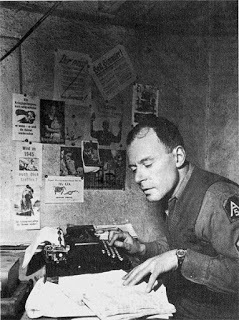 In her review of Frederic Spotts Cursed Legacy, The Tragic Life of Klaus Mann, Anna Katharina Schaffner quotes the author and Mann himself as follows:

"In his diary Klaus complained that his father's 'general lack of interest in human beings is especially strong towards me.'"

"Klaus Mann was six times jinxed. A son of Thomas Mann. A homeless exile. A drug addict. A writer unable to publish in his native tongue. A not-so-gay gay. Someone haunted by all his life by a fascination with death."

But the case of Thomas Mann raises another question, that of the camouflage of humanism under which artistic depredations are allowed to fester. A great writer may have an exorbitant appetite for life while at the same time being life's deadly enemy. Look at Tolstoy who early on exercised his doit du seigneur with his serfs while ending his last days, abandoning his wife and dying in Astopovo railway station. Norman Mailer famously stabbed his wife Adele on the eve of his candidacy for Mayor. V.S. Naipaul's sadistic treatment of his mistress which involved beatings and disfigurement has been documented in Patrick French's biography. And what can we say about Picasso. His portraits of the many women in his life appear to be the kiss of death; when he could no longer "palate" them they became works of art. It's no revelation to learn that successful creative people often possess enormous egos which sucks up experience like a black hole light. When one reads Too Far to Go the short stories that comprise Updike's eulogy to his first marriage, one wonders if the tristesse of the break up, so beautifully rendered, didn't, in fact, represent the author sacrificing life for the sake of art. In this view creative work is a form of taxidermy, in which the skinned animal is used to make the head which hangs over the fireplace.