What are the gay stereotypes?

That we want to shop all the time? That we are prissy and scared of rugged work? That we are horrible at sports?

As a member of the community, I spent many of my gay-formative years assuming the same stereotypes. Gays go to gay bars and dress in drag and worry more about the cost of a vodka tonic than the score of a football game.

However, like much of America over the past decade, my worldview has expanded as a greater number of us come out from every corner of society; from professional basketball players to CEOs of the world's most iconic companies.

And yet, when I started planning a three-year world record trip to all 400+ U.S. national parks to honor the legacy of my deceased father, I doubted I'd find any LGBT people with the same interest.

"Surely this isn't an area the LGBT community is involved with," I thought.

In fact, I was so sure gays weren't part of the outdoors community that I tried to avoid any giveaways of my orientation while pitching car manufacturers, outdoor apparel brands, and insurance companies to sponsor my journey. Even with the core reason for embarking on this trip being that I want to live the retirement my road-trip-loving father never got due to passing away at age 58, I worried my entire story would get eclipsed by one word: "gay." It wouldn't matter that I'm hoping this trip will encourage other people to live their dreams while they're alive and able, or that I'll become the only person to ever visit all 400+ national parks in one trip, all I could think was, "They won't want a gay person representing their brand. Not in these industries. Their customers would revolt."

So I hid my orientation.

I lowered my voice on phone calls and neglected to share blog posts that mentioned me being gay.

I straight-washed myself, afraid that no brand would want me otherwise.

I was doing a good job of it too: eventually spending months negotiating with the PR executive of a major auto brand to turn my trip into an ad campaign, all while successfully masking who I was.

And yet, even with all that effort, on the day the automaker declined my proposal, the first thought I had was, "I bet they Googled me and cancelled because they found out I'm gay."

So I cringed thinking of all the friends who wanted to know the result of my sponsorship proposal. Embarrassed, I avoided the topic until a gay friend called and directly asked.

"Well I'm sorry to hear that...but I just met a guy who works for the National Parks Conservation Association (NPCA). Maybe he can help! Can I put you in touch?"

Mustering my confidence, I contacted the individual and did my same sexual orientation dance. Lowered my voice and hid my background. That is, until he Googled me and it became part of the conversation.

I learned that the NPCA is advocating for the creation of a Stonewall National Park unit to bring National Park Service representation for each of the "Seneca Falls, Selma and Stonewall" histories Barack Obama so eloquently mentioned in his second inauguration address. We discussed my trip advocating for the cause and he directed me toward other individuals doing amazing outdoor adventures so I could glean inspiration. I soon found myself getting travel writing advice from a renowned openly gay National Geographic employee, discussing how my trip could advocate for the LGBT community with the first openly gay person to summit Mount Everest, and getting help on becoming the youngest person to visit all 400+ national parks from the current youngest person to do so--who just happened to be gay, partnered and living five miles east of me.

From there I learned that the three largest national park organizations -- the National Park Service, National Park Foundation, and National Parks Conservation Association -- all had initiatives focused on increasing LGBT involvement for their 2016 and 2019 centennials. They loved the idea of seeing an openly gay 30-year-old living out of a van while conquering Yosemite's iconic "Half Dome" or caring about Native history at the Navajo National Monument, and I was excited that my dream of seeing America's most beautiful and culturally relevant places could serve the LGBT community.

Though the morale boost was helpful, it wasn't strong enough to overcome my fears when one of my blogs piqued the interest of a few TV production companies. Even with my longtime dream of becoming "the gay Samantha Brown" by being the first openly gay host of a mainstream travel show the way she was the first female, I instinctually hid my sexuality.

Butching-up for on-camera test shots and never mentioning my goal, it wasn't until one producer did her research and said, "Make sure to tell the TV channels you're both gay and Christian" that I had to once again confront my fear.

"Won't that scare off advertisers?" I asked, worried that my background would sabotage my chances.

"Of course not!" she replied. "It's what makes you unique! There's already plenty of straight people on TV. Nobody needs to see the same show."

Suddenly my orientation no longer felt like a liability, but an asset: one I needed to stop avoiding.

Finally unafraid of embracing this aspect of my trip, I sent a short pitch to LogoTV's blog NewNowNext and the next day received my first major news feature; what I'd been so desperately seeking as I continued to pursue potential sponsors.

It all clicked. That which I'd been running from for so long was now my greatest strength; what set me apart from all the other #vanlife adventurers or travel bloggers. It was my differences that made me interesting. Even more so, it was my chance to build on Tim Cook and Jason Collins and everyone else in the LGBTQIA-Z community who heard Harvey Milk when he said, "Once they realize that we are indeed their children, that we are indeed everywhere, every myth, every lie, every innuendo will be destroyed once and for all."

This was my opportunity to change the mind of that closeted kid I used to be.

So while I continue to search for a sponsor or TV channel to help my journey become the world record I hope it will be, I've finally learned to stop being afraid of the sexual orientation that makes me different. If I'm able to use the qualities that make me unique to help others visit the national parks or feel comfortable in their own skin, then it's all worth it. Every fear, every doubt, and every triumph.

And who knows? Maybe one day we'll make "outdoorsy" a gay stereotype. 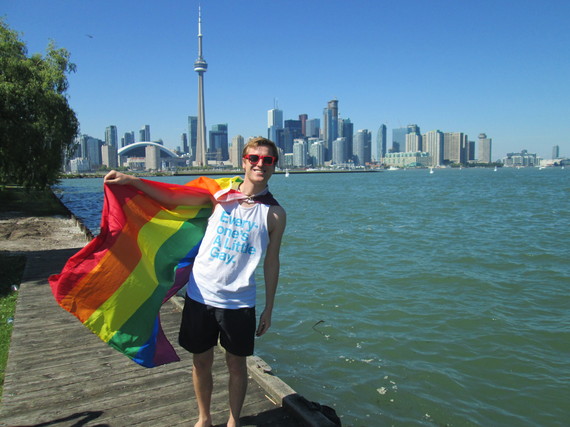