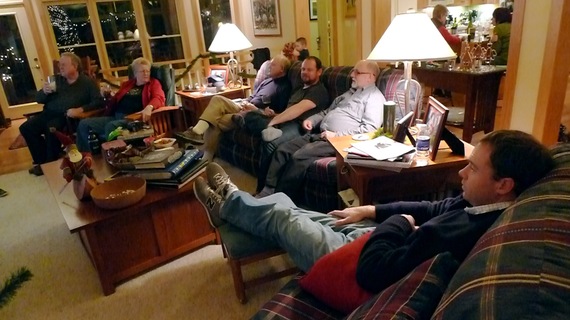 Binge-watching all episodes of Making a Murderer might seem like a great idea this weekend, but a new study published in Neurology suggests your utter laziness might be linked to brain shrinkage in your later years.

The study, led by researchers at the Boston University School of Medicine, found a direct correlation between poor fitness and brain volume decades later, using data taken over the course of 20 years.

The 1,500 forty-somethings enrolled in the Framingham Heart Study took two treadmill tests, 20 years apart, to measure their peak VO2 -- the maximum amount of oxygen the body can use in a minute. At the time of the second exercise test, researchers took brain scans of the participants using an MRI to assess brain aging.

Comparing the change in individual exercise and brain scan results over time, the researchers noticed that people who did worse on the treadmill test had smaller brains twenty years later. Specifically, every eight units lower a person scored on the exercise test was correlated to two year's worth of accelerated brain shrinkage -- a clear sign of brain aging. What's probably happening, the authors suggest, is that brain cells are dying and the connections between them are thinning out more quickly.

to seize everything you ever wanted

would you capture it?

Or binge-watch Making A Murderer?

The team is quick to point out that they haven't been able to establish a cause-and-effect relationship yet: While they don't know how exactly laziness and small brains are linked, they can confirm that they're somehow related. This conclusion shouldn't really come as a shock. Multiple studies have already linked physical exercise and the prevention of neurological ills, like memory loss and dementia. And, science aside -- there's no denying the post-Steven Avery post-binge feeling of complete brain obliteration.

MORE FROM INVERSE:
Photos via https://www.flickr.com/photos/sanfranannie/
Go To Homepage