Baby boomers are still asking 'What can I do for my country (and my world)?' and the answer is, probably a lot more than they could when they were 20.

Peace Corps and Bonnie Lee Black have something in common: age. Peace Corps celebrated its 51st anniversary in March this year; Bonnie was 51 when she closed her catering business and joined them as a volunteer in the thickly rain forested interior of Gabon, Central Africa. That was back in 1996. Bonnie was then on the leading edge of a surprising shift in volunteering, not only within Peace Corps, but in many volunteer sending organizations as Baby Boomers eschew outdated stereotypes about aging and throw themselves into post-retirement full-time volunteer service. 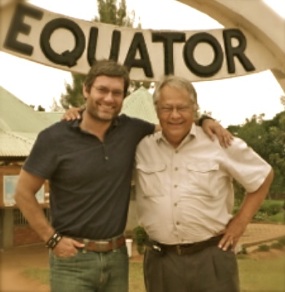 Even though overall rates of volunteering continue to fall for the Baby Boomers as they age (a normal part of the volunteer life-cycle that I've blogged about before), there is an absolute increase in older Americans volunteering abroad. A whole cottage industry has sprung up to cater to short-term senior volunteers abroad. (see here and here and here!) Higher end voluntourism operators owe a good part of their growth and success to these aging adventurer volunteers. (Of course, there are also growing domestic volunteer programs like Senior Corps aimed at connecting older volunteers to worthy causes.) In many ways this is not surprising; Baby Boomers have more money, time, and health to travel abroad then previous aging generations; they are mindful about giving back and leaving a legacy; and they are educated and armed with a range of applicable skills that many younger volunteers simply don't have. And this last point may be the most important one in terms of changing what volunteer service can look like.

Peace Corps volunteers 60 and older have more than doubled in the past three years. Just this month an 81-year old man completed a 27-month service assignment in Ukraine! Peace Corps Director Aaron Williams says that all Americans can make an impact in a developing country at any stage in life. "Older Americans bring tangible skills, professional development and life experience to their Peace Corps position in a community overseas. I encourage Americans to consider serving with the Peace Corps at any age." Peace Corps even has a special portal for volunteers over the age of 50. Deputy Communications Director Kristina Edmunson was recently interviewed by AP reporter Melissa Kossler Dutton for a article titled 'Not Your Grandma's Peace Corps? Well, It Can Be'. She told Melissa, "It's a natural fit. Older Americans who serve with Peace Corps come with a wealth of life experiences, creativity and professional development that can help make an instant impact in a community overseas." 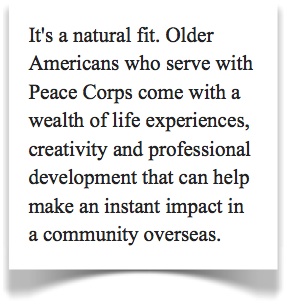 At 57, Tamara England-Zelenski (also profiled in the Dutton article) may be better fit for Peace Corps than she was when she first considered volunteering in her early 20s. "I had considered Peace Corps when I was in my early 20s, but I felt that I had no specific skills to offer, other than speaking French. I figured they wanted specialists and I was a generality, so I never applied. And I'm still a generalist, but one with a lifetime of experience in different areas and businesses."

This is mostly good news for aid elitists who rant against sending young unskilled volunteers out into the world armed only with good intentions and a spirit of adventure. As Bonnie says, "I hope and pray other people don't let themselves be sidelined. Don't think it's over at 50-something or 60-something. The older we are, the more we have to give back."