As Congress and the President wallow in finger pointing and fiscal gridlock, Federal Reserve Chairman Ben Bernanke plows ahead with his plan to disguise the country's economic ills by carpet-bombing us with freshly printed money. Aided and abetted by the gnomes in the Bureau of Labor Statistics -- who are doing their best to convince us that inflation remains at historic lows -- Ben has promised to conjure up $1 trillion a year out of thin air until unemployment returns to a politically acceptable 6.5 percent.

Where is all that new fiat currency going, and why haven't we seen it show up in double digit inflation? The answer should frighten you.

The narrative being promoted in Washington is that Helicopter Ben's money is being loaned to businesses so they can expand and hire more people. Oh yeah, and it's also supposed to finance cut-rate mortgages to help stabilize the housing market. Achieving both of these goals will supposedly goose up "aggregate demand," the magic elixir that purportedly makes economies grow. Mainstream journalists, who blithely call a reduction in the rate of growth of government spending a "budget cut," dutifully parrot the party line.

It's a great story except for one problem: There is no evidence it is true.

According to the astute number crunchers at Zero Hedge, total issuance of commercial loans since September of 2008 has gone down by $120 billion. Think about it -- who wants to lend money when the government artificially sets inflation-adjusted interest rates below zero? Spend two minutes in the real world and you can see the consequences for yourself. At a recent meeting between a local banker and a client of mine the banker complained that, "There are now 10 pecker-checkers for every pecker in the loan department!" Compliance paperwork has become so burdensome, and risk aversion so high, that only corporations that don't need loans can get them. As a result, small businesses, the classic engine for job growth, go begging while Fortune 500 companies park record levels of cash on the sidelines.

Yes, mortgage rates have hit rock bottom. But underwriting standards have gone through the roof. My wife and I -- she's a doctor; I'm a venture capitalist -- recently refinanced the mortgage on our condo. It took three months to get approval, despite the fact that the loan amount was for less than 30 percent of the condo's appraised value and we have perfect credit scores and no other debt -- and this only after we provided every bit of documentation short of proctology exams. What chance does a first-time home buyer have in a market like this?

So, where is Ben's money actually going? The data show that it is being stuffed onto the balance sheets of the Too-Big-To-Fail (TBTF) banks, some of which only became "banks" overnight when their brokerage businesses faced imminent collapse. Recapitalizing these "banks" after their housing market malinvestments and the crash of their derivatives casino -- the inevitable outcome of Alan Greenspan's money printing to fuel Fannie Mae's doomsday machine -- has been the principal goal of both the Bush and Obama administrations.

With the boundaries between Goldman Sachs, Treasury, the Fed and the administration virtually disappearing; the big banks' Democratic and Republican handmaidens running interference; and the media distracted while pursuing pissant stories about debit card fees, consumer protection rules, and shareholder gadfly proxy access; all is hunky dory in TBTF land.

But what happens to all that freshly printed money after it gets parked on bank balance sheets if it's not loaned to businesses and consumers? Perhaps we could sleep at night if it just sat there, as a cushion against the recession that lies ahead. But unfortunately, the "banks" appear to have flocked back to the derivatives casino, confident that as officially recognized TBTF institutions they are free to privatize gains, gorging on bonuses while the sun shines, knowing they can socialize their inevitable losses.

To see how much of your money they are playing with, take a look at the scariest economic chart of 2012. 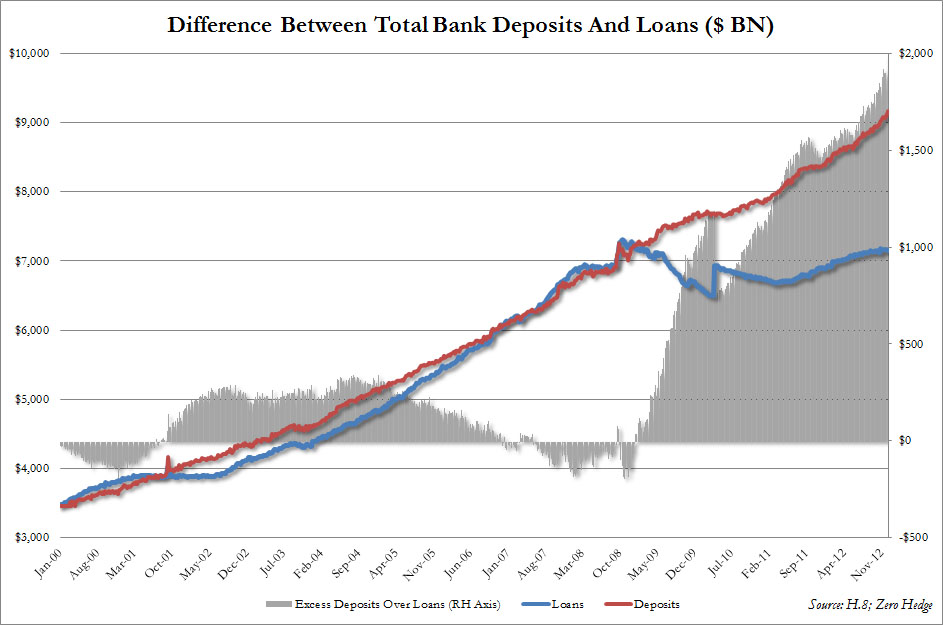 "Banks" are supposed to be chartered to take in deposits and use them to make loans. Under the magic of fractional reserve banking, only a percentage of the deposited money needs to be retained as ready reserves, while the rest is put to work in the real economy. And yet here we have a "banking system" that for the first time in history has $2 trillion more in deposits than outstanding loans!

If you think this makes the banks less vulnerable to shock, think again. Much of this balance sheet cash has been hypothecated in the repo market, laundered through the off-the-books shadow banking system. This allows the proprietary trading desks at these "banks" to use that cash as collateral to take out loans to gamble with. In a process called hyper-hypothecation, this pledged collateral gets pyramided, creating a ticking time bomb ready to go kablooey when the next panic comes around. (They don't call it gambling, they call it "hedging," which is a legitimate investment function, but I defy you or any regulator to define the difference.)

Remember JPMorgan's London Whale, the character that racked up $6.2 billion in trading losses before he was shown the door? Like cockroaches, you can expect more where he came from.

Well, nothing except grind the wheels of legitimate commerce to a halt while crony capitalists with the right connections in Washington party like there's no tomorrow.

And who can blame them? Anyone who believes our innumerate Congress and the career civil servants who staff our regulatory agencies can outsmart the wizards of Wall Street is dreaming. These government buffoons couldn't catch Bernie Madoff even after someone shoved a roadmap to his fraud scheme in their hands, or find a way to prosecute Jon Corzine when he was caught red handed looting client accounts.

So buckle up for the next roller coaster plunge, followed by the inevitable rush in Washington to "do something," namely bail out the same banking potentates that trashed the economy last time. Naturally, this will require tiding the economy over by printing even more money -- all of which will explode into double digit inflation the moment key players realize that money at rest quickly evaporates if left at rest under an inflationary regime.

And when all of this comes to pass, like clockwork journalists and pundits will be sure to blame it on capitalism! As if real capitalism could exist when investors aren't obliged to bear the risk of their own losses. Foisting losses on taxpayers, then debauching the money supply to cover it up, is not capitalism. Alas, it has become business as usual.