The fossil skeleton of a bird with strange teeth that lived 125 million years ago has been discovered in China. The bird had bizarre ridges on its teeth that may have enabled it to crack open hard-shelled insects and snails, the researchers said.

The unusual fossil, described in the January issue of the Journal of Vertebrate Paleontology, was so well preserved that some of its stomach contents were still present. The new find sheds light on the range of foods Earth's earliest birds ate during the dinosaur era.

"The teeth are weird and there are some stomach contents, which is unusual," said paleontologist Gareth Dyke, of the University of Southampton in the U.K., who was not involved in the study. "It's more evidence for the uniqueness and range of ecological specialization that are seen in these particular Mesozoic birds." 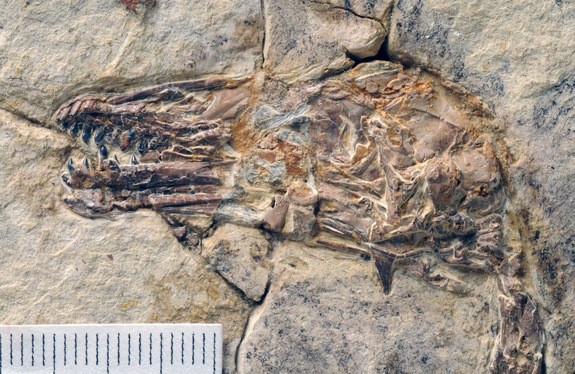 The well preserved Sulcavis geeorum teeth still had enamel on them.

The new species' specimen was unearthed in the Liaoning province in China, where many fossils from the Cretaceous Period (the period from 145 million to 65 million years ago that was the end of the Mesozoic Era) have been found over the last 15 years, said study author Luis Chiappe, director of the Dinosaur Institute at the Natural History Museum of Los Angeles. The primeval forest was teeming with ancient life, from pterodactyls and dinosaurs such as the microraptor to primitive lizards and various trees. The skies were also filled with birds, he said.

"This was clearly a hotspot of ancient bird biodiversity," Chiappe told LiveScience.

The newly discovered bird, a robin-size creature called Sulcavis geeorum, lived between 121 million and 125 million years ago. Sulcavis geeorum belonged to a class of extinct toothed birds called Enantiornithines, which were the most numerous birds during the age of dinosaurs. The diminutive creature looked somewhat similar to modern-day songbirds, with a key difference: the bird had some very strange teeth. [Album: 25 Amazing Ancient Beasts] 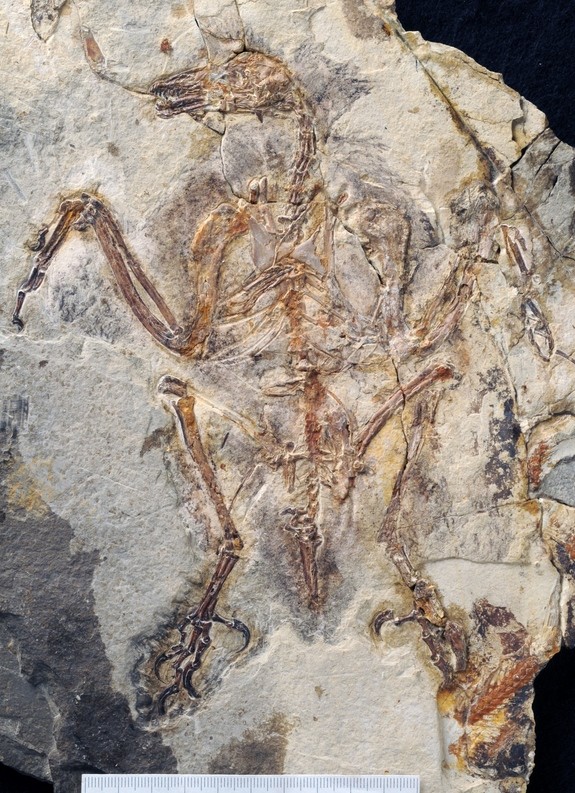 The fossil was so well-preserved that some of the stomach contents were still present.

The teeth of this tiny flier had sharp, pointy crowns. In addition, the fossil found by Chiappe's team had preserved tooth enamel that formed serrated ridges. Those serrated ridges probably enabled the birds to crack open the hard exoskeletons of insects, crabs or snails, Chiappe said.

The strange teeth may shed light on a prehistoric mystery of sorts: No one knows exactly why early birds had teeth. It's also unclear why they have lost their teeth at least four times since they first emerged in the fossil record. In fact, modern-day birds still have genes for teeth, but the genes are turned off, Chiappe said.

"The traditional view is that teeth are heavy, and the birds evolved beaks as a way of making their bodies lighter. These teeth are pretty small and it's hard to imagine that they had such a huge impact on the weight of the animal," he said.